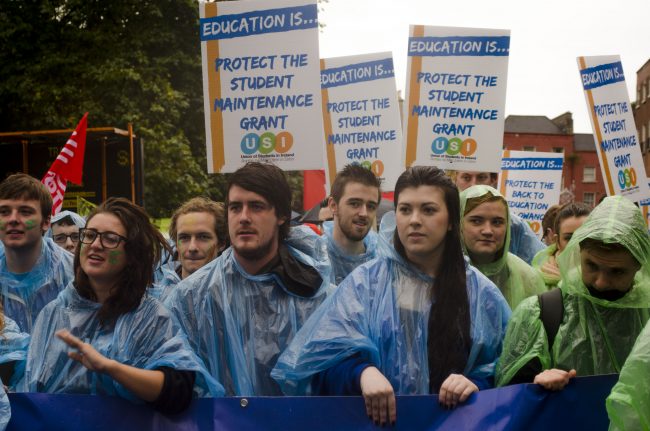 Students will be able to miss lectures and classes to attend the national demonstration organised by the Union of Students in Ireland (USI), after the College Board agreed to facilitate students who wish to attend the march.

The march, which will take place after the government’s Budget on October 11th, will return this year after being replaced by a national voter registration day last year. TCDSU is hoping to have one thousand students at the march, which will take place on October 19th. According to the proposal for the demonstration, which was agreed up at USI’s National Council in August, the event will “not be labelled as a student protest” but will instead aim to highlight “the consensus and support” for a publicly funded higher education system.

Speaking The University Times , Trinity College Dublin Students’ Union (TCDSU) President, Kieran McNulty, who is a member of the College Board and raised the proposal at the meeting last week, said that the decision will mean that “students can miss lectures” to attend the demonstration, adding that it was “highly appreciated by the students’ union”.

While College has not yet decided how exactly it will facilitate students who miss lectures to attend the demonstration, McNulty said that he expects there will be scope for rescheduling some lectures where possible or for providing additional resources such as lecture notes or recordings.

McNulty also said he hoped that the decision would increase turnout at the march, emphasising the importance of the event as the Oireachtas Education and Skills Committee begin to discuss the three options for funding higher education recommended in the report by the government’s higher education funding working group, which was published in July.

McNulty also confirmed that the TCDSU lobby group would be giving a presentation to the Education and Skills Committee, which is chaired by Fianna Fáil’s Fiona O’Loughlin, in December.

It is “about time everyone in the higher education sector stands up”, McNulty said, “and Board approval is part of that”. The Provost, Patrick Prendergast, and the Vice-Provost, Chris Morash, were both supportive of students attending the march, McNulty said.

While the Provost has not made public his views on how higher education should be funded, he has expressed frustration at the underfunding the sector has received in recent years. In a joint press statement with the President of University College Dublin (UCD), Andrew Deeks, after the publication of the latest QS world university rankings, in which Trinity fell to 98th, he said: “The political system must now make the difficult choices that are needed to improve the funding given to universities and in the manner in which this funding is distributed.”

College has not always explicitly sought to support students who miss class to attend the annual demonstration. In an email to students in 2014 the Senior Lecturer, Gillian Martin, told students to inform their school or department if they are planning to attend the march, adding that “it is very much up to individual Schools/Departments to make a decision on how they treat the absence as they may have different attendance requirements”.