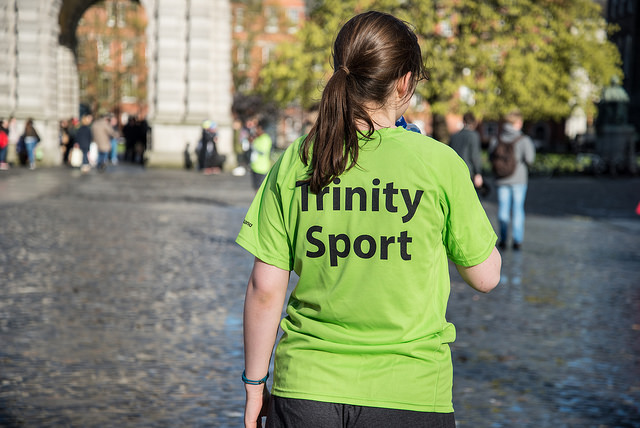 When Adrian Fitzpatrick, the Manager of Dublin University Association Football Club (DUAFC), resigned in protest at the actions of the Department of Sport two weeks ago, he took with him years of experience and skill that comes with being the owner of a Uefa Pro Coaching License.

His resignation comes after a run of success for the football club. Even back in February 2015, there were already signs that the future was promising. Trinity had just beaten University College Dublin (UCD), the then-league champions, with a brilliant 30-yard Darren O’Donoghue free kick to secure a Collingwood Cup final against University College Cork (UCC). Not only did the 1-0 scoreline constitute an upset against the favourites, it also set up the first Collingwood Cup final in 13 years for Trinity.

Fitzpatrick, or “Aido” to his players, was the mastermind behind that victory, but since then he has felt like the club has been “banging their heads into a brick wall”. Worse, the obstacles aren’t arising on the pitch but off of it. He says that over the last few years he has had a growing sense that the College didn’t acknowledge or value the efforts of the football team. He says that emails went unanswered, suggestions were ignored, facilities were restricted and the planned €3 million Arena Pitch development he was told he would have access to was suddenly re-allocated exclusively to the Trinity GAA team. Having made representations to players and enticed them to play for Trinity with the promise of improved facilities, his resignation was as much a matter of honour as of frustration. Fitzpatrick, speaking to The University Times, was palpably disappointed: “I had lots of plans, lots of ideas for the future.”

He was a rarity among third-level football coaches in that he holds a Uefa Pro Coaching Licence, the highest certification available to football managers and coaches

While there is certainly a healthy and wholly necessary debate to be had about the allocation of resources to clubs in college – both from club to club and within clubs between men’s and women’s teams – Fitzpatrick’s departure arguably represents a self-inflicted wound for the College.

It is a great pity for a number of reasons. He was clearly able to motivate his players and imbue them with mental strength, as evidenced by their return to the Collingwood Cup semifinals last season after their heartbreak against UCC. He achieved this consistent success despite operating with limited resources and and restricted access to facilities. What’s more, he was a rarity among third-level football coaches in that he holds a Uefa Pro Coaching Licence, the highest certification available to football managers and coaches.

It’s almost impossible to overstate the importance of this last point. The Pro Licence is a mandatory requirement for any coach or manager looking to take charge of a team in Europe’s top-flight leagues. As Alistair Magowan put it for BBC Football: “The Uefa Pro Coaching Licence is aimed at Europe’s elite band of coaches, but it is actually more about management than coaching itself.”

The Pro Licence is for Europe’s “elite band of coaches”. I’m almost tempted to capitalise those words, but they leap off the page regardless. No one is talking about college football here. Elite means the Premier League, the Bundesliga, and to a lesser extent, the League of Ireland. The path to obtaining a Pro Licence is arduous and costly, reflected in the very small number of managers who can boast of one. A coach has to first pass the A and B Licence requirements, which address tactical competencies, squad selection and man management, deciding factors on the football pitch.

In Ireland, there are less than 40 managers plying their trade with a Uefa Pro Licence and almost all of them are clustered around the League of Ireland (LOI), our equivalent of the Premier League

The A Licence takes at least a year to complete and requires a substantial financial investment, between €2,000 and €3,000, as well as 180 hours of hands-on training, although Uefa guidelines recommend a further year of management experience before one attempts the Pro course. The Pro Licence costs around €7,500 to complete in Ireland and requires at least 240 hours to be logged.

If the Uefa material is any indication, the course is highly sophisticated: “Modules such as handling top-class players, using the latest technology, analysing opponents’ strengths and weaknesses and dealing with players’ problems on and off the pitch are all covered in the course. While there are residential weeks, a lot of the work is done by the coaches within their clubs.” There are also compulsory courses on business management, club structure and how to handle contracts and agents, all staples of life at the richest clubs in the world. These licences are worth their weight in gold, especially when you take into account the exorbitant cost of completing them.

Some of the most demanding aspects of the licence involve improving the performance of one key player and succeeding in one key fixture during the season. The ability to focus on key players and extract the most out of them is the hallmark of the very best managers, and Pep Guardiola comes to mind as the finest proponent of a laser-focused management style.

Fitzpatrick, as a Uefa Pro Licence holder, belongs to the rarefied world of top-flight management, as evidenced by a brief list of managers who have qualified. Arsene Wenger, Carlo Ancelotti, Jose Mourinho and Guardiola all feature, and in effect, it’s a roll call of the biggest names in football management. In 2010, Uefa ruled that every manager in the major European Leagues has to have a Pro Licence to continue to be in charge of their team. One notable exception to this rule was Sir Alex Ferguson, who never even found the time to qualify and was granted a special diploma by the English Football Association instead to get around the oversight. In Ireland, there are less than 40 managers plying their trade with a Uefa Pro Licence and almost all of them are clustered around the League of Ireland (LOI), our equivalent of the Premier League.

If that isn’t an indication of how rare these qualifications are, see the example of Shamrock Rovers. Their caretaker coach Stephen Bradley lacked the Pro requirements to carry on managing the team due to Uefa rules, and so they were left scrambling for a solution during the last few months of the 2016 Airtricity League season. The club, winners of the LOI a record 17 times, eventually appointed former FC Haka manager, Sami Ristila, as part of their management team as stop-gap measure. Meanwhile, Trinity had a Pro Licence holder in Fitzpatrick struggling to find a pitch to train on. It would be a farce if it wasn’t such a shame.

Whether it is classified as a focus sport or not, the football team already had its most valuable asset in place, so this development can only be viewed as a step backwards for all involved

The current situation was as avoidable as it is regrettable. The consensus among the players is that the College has lost a great coach who loved the game. More damningly though, an exceptionally over-qualified coach has left at a time when they are supposed to be promoting investment in sport to recruit the very best coaches and trainers.

The Sports Strategy, launched in February 2016 , promised certain “focus sports” additional resources, support and elite coaching. One of the stated aims of the strategy was the recruitment of the most qualified and experienced staff available to lead team development. Whether it is classified as a focus sport or not, the football team already had its most valuable asset in place, so this development can only be viewed as a step backwards for all involved. You could argue that perhaps with a little more responsiveness and clarity from the College, the predicament the team find themselves in could have been avoided, minimised or at least red-flagged months ago.

It is incredibly unlikely that Trinity will be able to attract a coach of the same calibre, with the same love for the college and with the same qualifications as Fitzpatrick, especially with the season already underway. To step into the vacuum and tackle the uncertainty surrounding the club, Trinity will need a coach who has seen it all, done it all and is looking for challenge. In my eyes, the odds of that happening are so low, you may as well ring Sam Allardyce.