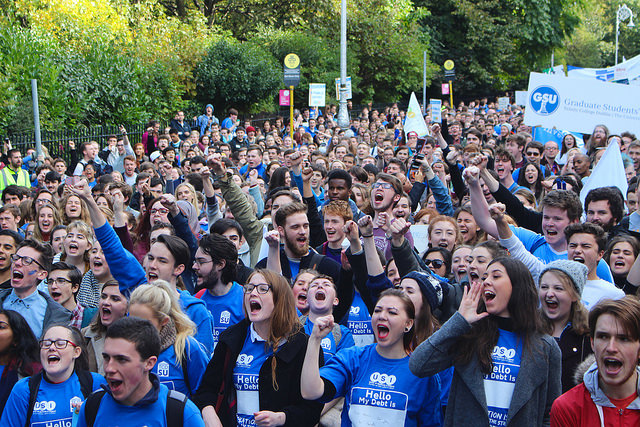 Now that you’ve arrived in Trinity, you might have noticed you’re now a member of Trinity College Dublin Students’ Union (TCDSU) and the Union of Students in Ireland (USI). Postgraduate students will be members of the Graduates’ Students Union (GSU). But what is the point of these organisations and why do they exist?

What is the Union of Students in Ireland?

USI is the national representative body for students in third-level education in Ireland. Its members are the students’ unions from various universities in both Ireland and Northern Ireland. The USI functions as a democracy, with the annual student congress being the highest authority in the union. The number of seats in the congress are assigned to each of the affiliated universities in accordance with the size of their student populations. Each union also sends voting members to the executive body of the organisation, the National Council. These members vote on whether or not an issue will be campaigned for.

What is the current state of funding for third-level education?

A report last year from the Expert Group on Future Funding for Higher Education, chaired by Peter Cassells, outlined a funding plan for the education sector going forward. “There were three options given last year”, USI President Michael Kerrigan explains to The University Times. “One, is to have a publicly funded system, similar to Germany, France, and a lot of Europe. The second one is to keep things as they are, which isn’t ideal. And the third one is a student loan scheme, which is present in the UK, US, Australia, New Zealand. So we’re fighting for a publically funded education.”

Every student at Trinity is automatically a member of the students’ union. The union does more than simply promoting activism for various campaigns. It is also the first point of contact if a student is having problems with any aspect of college life. Different issues are handled by the five sabbatical officers of the union: the President, the Education Officer, the Welfare Officer, the Marketing and Communications Officer, and the Entertainments Officer. The sabbatical officers are elected directly by the students at the end of a week of campaigning in February.

Speaking to The University Times, Kevin Keane, President of TCDSU, said that he wants the union to be the outlet with which students can get any help they need, be it emotional or academic. However, the importance of campaigning is not lost on Keane: “This is a vital year for two campaigns: higher education funding and repeal the eighth. I want anyone who is interested to know they can get involved in whatever way they want. Whether it is painting a sign and standing in a march for a day or becoming more involved in the campaign itself.”

How does the union make decisions?

The union is structured in a way that allows for a representative council to make decisions based on the wants and needs of the students themselves. This means that every course has a certain number of class representatives, depending on their specific size . These class representatives are the intermediaries for students to the rest of the council and are voted in at the beginning of the year by their classmates. Council meets seven times in the year to vote on what the union should focus on. Any student is welcome to go, but only elected members are allowed to vote. The union works closely with USI, but it also works closely with a union a little closer to home. The Graduate Students’ Union (GSU) serves a similar role to the TCDSU, only with graduate and postgraduate students in mind. The GSU functions similarly to TCDSU, with a regular council in which representatives talk about what is important to the students they represent.