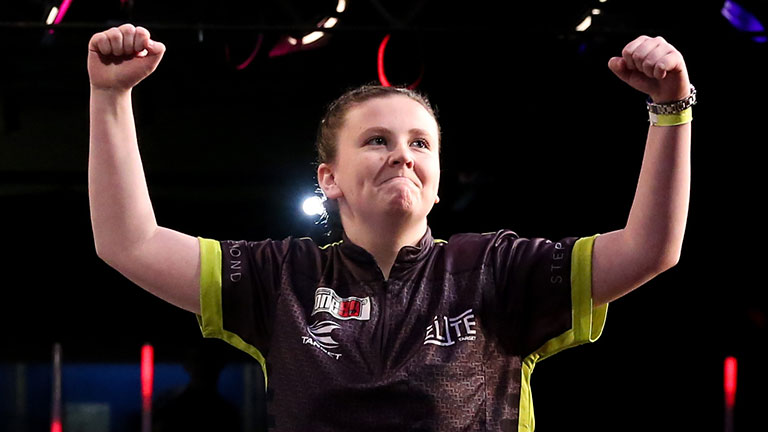 The first month of the leaving certificate year is a time many do not like to dwell on.

From CAO forms to impending Christmas exams, September comes like a highlighter-yellow tidal wave of history notes and biology exams – plunging all sixth-year students into the deep end of their final year of secondary education.

For Katie Sheldon, however, her mind is set on a target of the more literal kind.

As a National Singles and all-Ireland darts champion, the Tallaght native has more than just end-of-year exams to prepare for in the dusk of her teenage years. Between school, homework sessions and the routine trials and tribulations of life as a 17 year old, Sheldon is a regular fixture at both female and male darts across the country – and has been for over five years now.

“I went to my first competition when I was 12 and got to the quarterfinals, which was huge for me at the time, because it was an Irish ranking”, says Sheldon.

But not shortly after, the young virtuoso began to aim for bullseyes on a global stage. Representing Ireland in Japan, Germany, Romania, Holland, Sweden, Turkey, Scotland, England and Gibraltar, to name a few, Sheldon is no stranger to international oches. Nor international titles for that matter.

Between school, homework sessions and the routine trials and tribulations of life as a 17 year old, Sheldon is a regular fixture at both female and male darts across the country

“I’ve had two silver medals in World Cups … my biggest accomplishment is probably winning the World Masters Girls championship in 2019. Definitely my biggest achievement, and most proudest.”

And with such laurels, the teen has soured to heights reached by only one other female darts player on the island: fellow Dublin native Robyn Byrne.

“[Byrne] helped me massively. She told me to go to the Irish Rank, she showed me what to do and where to go”, she muses.

“That kind of pushed me then to keep going to more competitions and so it was great to have another girl with me to show me the way to go about it.”

As a sport so often considered a mere accessory to pub nights for the nation’s men, players like Sheldon and Byrne are reshaping the face of the game in more ways than one: as some of the youngest, and only female players in many of their competitions. Having trained and competed against both men and women for the majority of her tournaments, Sheldon remains unperturbed when it comes to the gender of her opponents.
“I play in a men’s league on a Monday and Wednesday night at the pub, and I’m very welcomed in there. There’s no like: ‘Oh, how come a girl is playing?’ – there’s none of that. And if I’m playing in any competition, I’m more than welcome to play in the men’s competition. So for me personally, I’m very comfortable playing against the men.”

I play in a men’s league on a Monday and Wednesday night at the pub, and I’m very welcomed in there. There’s no like: ‘Oh, how come a girl is playing?’

And comfortable she should be. With all-Ireland youths championship titles under her belt, Sheldon has proved she can throw just as well – if not better – than her male counterparts. And thanks to her fellow female dart-throwing exemplars who are shattering the glass ceiling for women in the sport – the sky’s the limit.
“Now, there’s loads of women players. You have Lisa Ashton, Fallon Sherrock, Lorraine Winstanley as well…you look up to them because they beat men on a regular basis as well. So it’s great to have other women who are beating men as well, to look up to.”

As a pioneer of the sport from the age of nine, Sheldon too may find herself inspiring the young minds of this country to aim for the bullseye. Starring in filmmaker Peter O’Brien’s latest documentary Seven Feet Nine and a Quarter Inches, the rising star hopes to show young women that they have their place on the oches of the world too.

“I’d like to think that maybe in the future, if I keep pursuing it, that someone does take it up because I’ve been speaking about it…I’d like to hope that I’m a good role model to other players, maybe not just girls, but even younger lads as well. You do want to be a good role model if someone is looking up to you”, says Sheldon.

And does the pressure ever get to her? Is it too much to expect such a young player to not only represent her country and her age group – but her gender too?

“I think for me personally I do put myself under pressure because I know how well I can perform, then when I don’t perform as well, it is very annoying”, she says.

And with so few women in her category in Ireland, the pressure to prove many wrong often lies solely on the shoulders of the seventeen year old.

“Abroad, there are a lot of players my age…Over in England there’s a girl called Beau Greaves and she’s my age as well. She’s 17. And she’s very, very good. There are a lot of young women taking it up and playing abroad. And hopefully, a few more over here will start taking it up.”

So with so many external pressures and expectations, many may wonder where the accomplished teen has managed to derive such an irrefutable passion for the red, green and black of darts boards around the world.

“For me, I think it’s my dad. Me and my dad do everything together. We go away together. He’s probably my number one. And all my family are amazing, but me and my dad are really, really close. He comes away with me and makes sure that everything is done for me, and he’s amazing.”

And as not only a father figure, couch and number-one fan, Sheldon’s father, Stephen Sheldon, has encouraged his daughter to pursue the oche from day one.

“My granddad had a dartboard, in his shed. So I used to throw a few darts in there. Then I asked my dad for a dart board one day, as me and him used to watch darts quite a lot in the house. So he then got me a dart board when I was nine and I started playing then basically.”

And thanks to the successes of so many female players beforehand, Sheldon now looks towards a very different world for women in darts.

Following the successes of champions of the sport like Fallon Sherrock – who beat two men at the World Championships, becoming the first woman to win a match at the Professional Darts Corporation (PDC) – as well as years of dedication to the craft from women all around the world, organisations like PDC have begun to turn their attention to promoting their female victors.

Starting in 2020 with four events in the early foundations of the Women’s Series Competition, the PDC has now expanded the competition to a 12-event spectacular, to be played from August to October of 2021. And like many times before, Sheldon finds herself gearing up for gold.

“This is a huge competition … we’re just hoping that the women take control and do their part to kind of push the game forward … it’s kind of up to us to take charge of it and enter the competition because if we don’t enter we won’t get the chances.”

And this may very well be the case. As only the second wide-scale Women’s Series Competition, the future of funding for women in darts is contingent on the ability of players like Sheldon, Sherrock and Greaves to draw a crowd – and so the stakes are high.

For Sheldon though, it’s not always quite so serious. Despite adversity, gender battles, worldwide tournaments – and of course, her leaving certificate – for the young maestro, darts is still as alleviating as when she was nine-years-old in her grandfather’s attic.

“I think for me, it’s kind of my relaxation….For me, I’ve been paying for so long now that I just think it’s, it’s just become a part of me. It’s a bit weird when I’m not playing darts…I also do have a lot of friends from darts so when I’m at darts I’m not just sitting on my own, I’m with people I call my really good friends….I’ve met a lot of incredible people.”

So while for many, the face of darts competitions may currently still be founded in pork scratchings and beer-guzzling, young women in the sport remain the fresh blood in the beating heart of modern darts.

And with a player with the forte of Katie Sheldon? They may have just hit the bullseye.