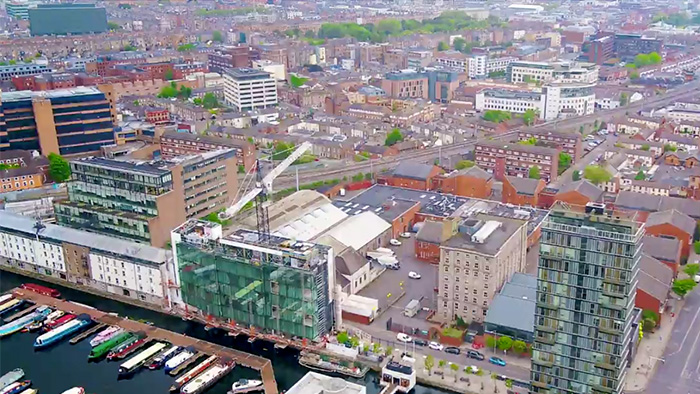 Trinity plans to begin work on the Grand Canal Innovation District’s Innovation Hub in 2021, with a view to completing the site in early 2022, a top college officer has said.

College announced today that it has submitted the planning application for the proposed Innovation Hub, initiating the first phase of the development of the Grand Canal Innovation District.

In an interview with The University Times, Dr Diarmuid O’Brien, College’s chief innovation and enterprise officer, said: “Our hope is that we can begin the works on the site in Quarter Two next year, and it will be finished and open in Quarter One 2022.”

“We’re not building per se, we’re renovating buildings that are already there”, he added.

“It’s a very significant transformation of those buildings but there’s not massive construction going on, so we can deliver it quite quickly.”

The larger area will be developed over a period of 10 years and will cost an estimated €1 billion.

Plans for the district – which will be situated in Grand Canal Quay – include €150 million state funding, after the government backed proposals for the project in January.

According to O’Brien, the government has provided “pretty much half of the funding to support this piece”.

O’Brien said that the move to begin development of the Innovation Hub was a “big step”: “It will really add to the mission and the purpose of what we’re trying to achieve.”

“The big vision for it is to find a way to connect our university – both at a student level and at a research level – better with the city and with the enterprise community and the start-up community”, he said.

“We can then use that to change the perception of Dublin and Ireland as a place where global businesses can do research and innovation.”

“What we want to do with this first project is to really try that at a micro-scale”, he added.

O’Brien also confirmed that the campus’s E3 Research Institute will form the next phase of the development, though its construction is “not imminent”.

“What we’re looking to do is begin planning and construction of that project certainly in the next 18 to 24 months, but it’s not imminent in that sense”, he said.

“We’re working hard to get that business case and that funding in place at the moment.”

The Grand Canal Innovation District will be located in Dublin’s “silicon docks” alongside international corporations such as Google and Facebook. It will be modelled on districts in cities like Boston, Toronto, Rotterdam and Barcelona.

The 5,500 square metre Innovation Hub is set to serve as a space for entrepreneurs, academics, early stage start-ups and innovation teams to convene.

The Innovation Hub will include a new public square with a cafe and seating as well as a landmark tower that dates back to 1862 when the area housed a sugar refinery.