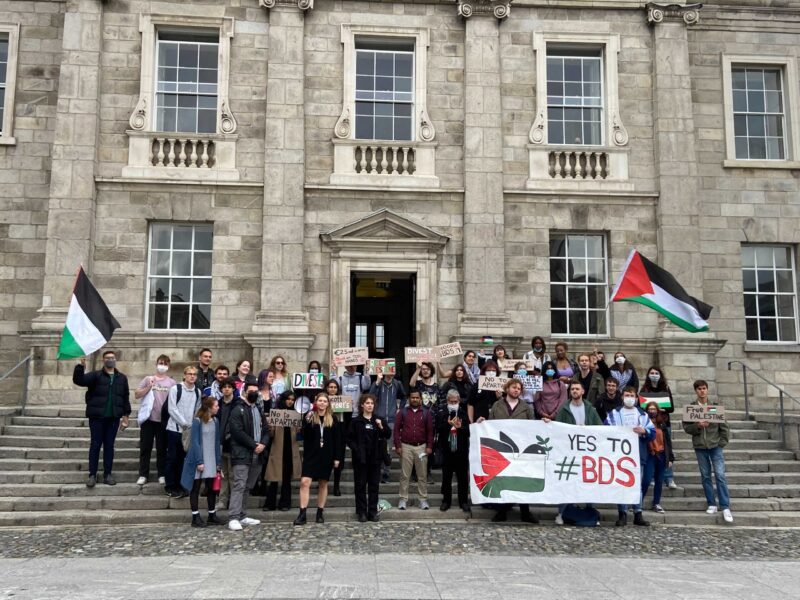 Mairead Maguire for The University Times

Around 50 students gathered at the Dining Hall this afternoon to protest Trinity’s ties to Israel as part of Trinity College Dublin Students’ Union’s (TCDSU) anti-apartheid week.

Representatives from the union and Trinity BDS were present with placards reading “Free Palestine” and “Blood on TCD’s hands”.

Speaking to The University Times, TCDSU President Leah Keogh said: “We’re standing here today in solidarity with Palestine and our Palestinian students to keep up the momentum that we built back in May, because the fight to free Palestine isn’t over.”

“We’re calling on Provost Linda Doyle, we’re calling on the College, to divest the millions they have invested in the arms industry that facilitates the Israeli apartheid regime, and we’re asking them to cut ties with any Israeli universities as part of the boycott”, she said.

“This ask has been made since 2015 and now is the time for change.”

The union’s petition for College to boycott and divest has amassed over 200 signatures. Keogh will present the petition to the Provost today.

Solidarity-People Before Profit TD Richard Boyd Barrett also spoke, saying that “our job is to constantly try and reach out to more and more people, to tell them the story of the terrible injustice that has been done and is being done to the Palestinian people.”

“It’s not a story of two warring tribes, it’s not the story of periodic violence”, he said, in an impassioned speech. “It is the story of a terrible historic crime that’s committed against the palestinian people in 1948.”

Speaking at the protest, Chair of Trinity BDS Clara McCormack highlighted “the oppression that’s happening against BDS campaigns around the world”.

“This is our own government and Department of Foreign Affairs criminalising anti-Apartheid activists”, she said. “For a country that has its own history of settler colonialism, for a country that still has a portion of the island still occupied by those colonising powers, this is a ridiculous barbaric position for our Department of Foreign Affairs to take.”

In June, Trinity BDS occupied the offices of the Department of Foreign Affairs, calling for the expulsion of the Israeli Ambassador to Ireland.

Addressing the crowd, PhD student and People Before Profit member Conor Reddy said that when he first became involved with Students for justice in Palestine, “we were four or five people in a room. We were widely reviled by College authorities.”

“People didn’t see the need for solidarity. People didn’t see how the issue of Palestine goes back to the very deep well of pro-humanitarian and anti-apartheid activism that exists in this College.”

Reddy said of anti-apartheid protests which took placer earlier this year: “It was really heartening to see the student support for those protests … the question now is how to we build on that.”

Reddy implored the crowd to “really push College and the new Provost to take a look where our money is and take a stance”.

“It’s not racist or anti-Semitic to stand up against the state of Israel”, he added.

The Boycott, Divestment and Sanction (BDS) movement is a Palestinian-led campaign which works to end international support for Israel in the context of the country’s treatment of Palestinians.

The long-term policy mandates the union to support the movement and “comply with the principles of BDS in all union shops, trade, business and other union operations” and to lobby College and the government to adopt a policy of boycott, divestment and sanction of Israel.

The long-term policy would also see the introduction of a boycott, divestment and sanction implementation group within the union.