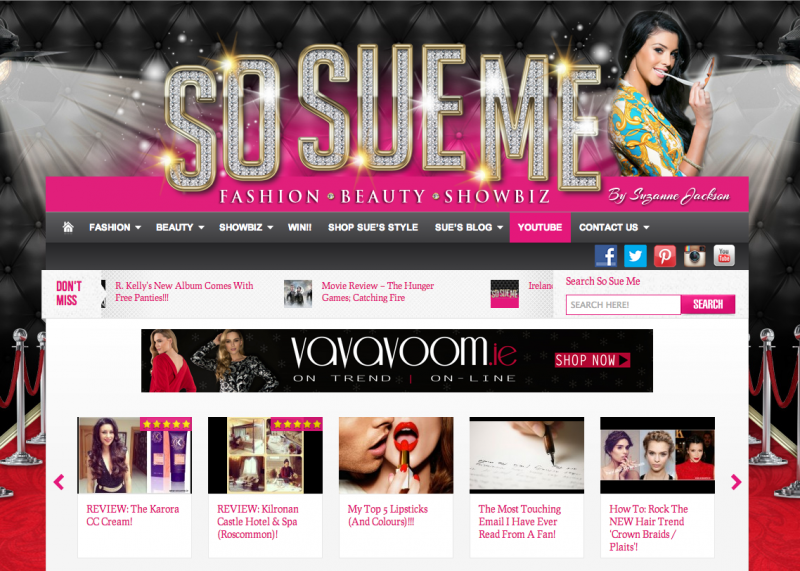 It has become a running joke between me and a few friends that when I see somebody liking or sharing a post from the blog So Sue Me, I slam my fist on the table, throw my head in my hands and let out that wonderfully overused phrase: “This is what’s wrong with Ireland.” I usually continue by reading the blog post out in a really exaggerated high-pitched voice while posing with a hand placed on the left side of my hip. I believe it’s called the “teapot”. For those not familiar with So Sue Me, it is a fashion and entertainment blog, which also happens to be the most popular blog in Ireland.

For the most part, it’s just a joke. I am just trying to rip the piss out of the whole selfie, Instagram, taking-photos-of-yourself-and-sending-it-to-your-friend-for-her-to-upload-on-her-page culture. I mean, self-involvement is fairly easy to make fun of, especially when it’s all over social media. Then again, when I browse through the pages of So Sue Me, the idea that what’s being promoted here is fundamentally wrong seems glaringly obvious.

When you go onto the website it has all the glitz and glam that you would expect from a Bratz dolls music video. The background consists of a black velour wall with a red carpet trailing up the side. As a header, spotlights shine down on the sparkling block capitals: SO SUE ME. The blogger herself, Suzanne Jackson, poses proudly with a pair of glasses tucked into her mouth suggestively. Underneath the title are three words: fashion, beauty and showbizz – because that’s all that there is to life, really.

Apart from the fact that all you can see when you scroll down the page are riveting posts about how to clean your makeup brushes or pictures of Suzanne perched on her white Audi, what really gets me how this stuff is received online.

What the So Sue Me blog is giving us is a woman who eats, breathes and lives as a consumer

Suzanne Jackson is not lying when she describes herself as “Ireland’s most successful blogger” with over 350,000 international readers, 91,000 likes on Facebook, and massive followings on Twitter and Instagram as well. You would think that her blog posts about “What Sue Wore” on nights out in Everleigh Gardens, or YouTube videos on her latest shopping spree in Penneys would be laughed at. Wrong.

On these pages you’ll get comments like: “OMG gorge! xo” or a simple “<3”. Sometimes people ask where she finds her “fab dresses” or else just compliment her perfect figure. A selfie of Ms Jackson with a face full of makeup, her head cocked to the side and her mouth just slightly open is sure to get over 300 likes on Facebook. Of course, So Sue Me replies to the odd comment with the same kind of depthless sentiment and a signature “x”. No banter, no conversation, just really mundane and flat replies.

So what’s wrong with Sue’s mission to share her personal style, or her five star reviews on every salon that she’s invited to? You could easily make the argument that just because some young women aren’t into the content of this blog, that doesn’t give them the right to make fun of those who are. It’s a fair point. However, at the heart of this blog and Jackson’s social media posts is a selective look at womanhood, a restrictive idea of what a woman should be.

What the So Sue Me blog is giving us is a woman who eats, breathes and lives as a consumer. She is nothing more than the value her clothes or her beauty regime holds. A Barbie doll that is quite content living in the isolated confinement of the Dream House. With so few women as opinion leaders in the media, it is disappointing to see that one of the most influential female bloggers is one who conforms to a predetermined concept of “female.”

The conversation is limited to those three themes (fashion, beauty, showbizz) which shine like a beacon underneath the blog’s header and each of them is more obsessed with the acquisition of things than the next. All the Instagrams of her new shoes and all the posts about what beauty products she’s using are completely in line with what women have been marketed as. Sue’s not painting an original image at all, despite how much she might claim to have a unique style. It is simply made up of the ‘Ms Consumers’ that we are exposed to everywhere in the media.

What’s worse is that we’re buying into this. We celebrate the signature poses and “peace and pouts” that have become staples in young women’s portrayals of who they are to the world through likes and comments. The issue with this is that by worshiping self-involvement we are feeding the notion that our worth is only the sum of a number of visuals that we create.

By accepting the image, we accept that it is all we have to offer. Yet, the thing is, women have a lot more to offer than what is in the contents of our handbags – or even what brand that handbag is for that matter. There is a definite need to stop liking these blog posts, stop treating self-involvement as the new black, and realise that your value is much more than than the sum of your selfies.