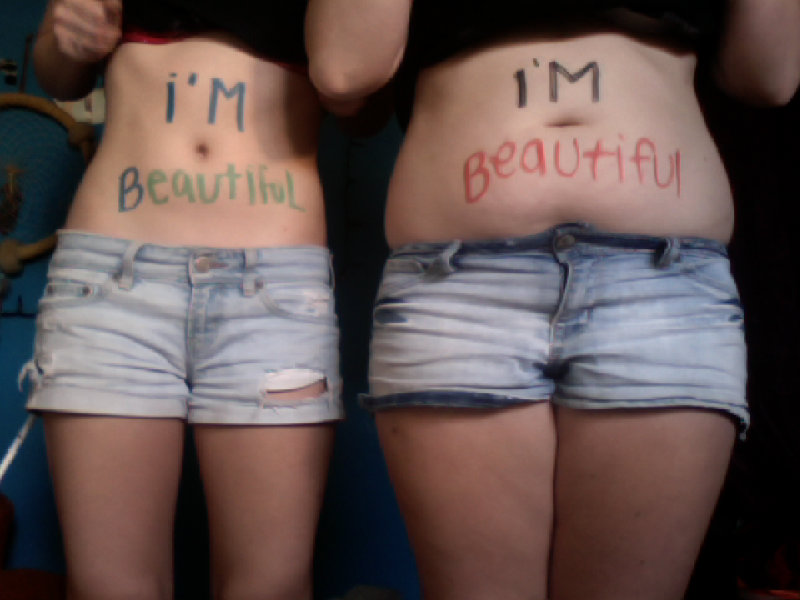 About a year ago a friend of mine was taken into hospital. Severely ill, she found herself bed-ridden for nearly 3 months. Over that time, and due to the nature of her illness, she lost a lot of weight – so much so that, when she emerged from her lengthy hospitalization, she was a shell of her former self. To those of us that knew her, we could clearly see the effects of her illness on her frame – her gaunt cheeks, her ribs showing through her t-shirts, her thin legs.

Yet, what struck me the most was the number of compliments she received, particularly from those who had no idea about her experience with the illness. They congratulated her on the weight loss, commenting on how fantastic she looked. They asked for dieting tips and exercise regimens. It was hard, because the reality was that her illness was an incredibly difficult time of her life. From all the compliments she received she was left with the impression that somehow it had benefited her in some extreme way.

My point in telling this story is to highlight the distressing fact that ‘skinny’ or ‘thin’ has become the ideal, as opposed to a ‘healthy’ body type. Regardless of your frame, your genetics or your dietary needs, if you’re not skinny, you’re simply not good enough – or at least, that’s what seems to be the consensus by many of the main media outlets. We are constantly bombarded with magazines telling us about celebrities who have ‘ballooned’ up to a ‘shocking’ 10 stone in weight, and reality TV shows that are ever more focused on shallow ideals of appearance being the only thing that matters (see; Tallafornia, Geordie Shore or any of the same shows of this ilk).

“If you are healthy and happy with your body, then no-one else has the right to put you down for having the body shape that’s natural to you”

In recent years, however, a new movement has started, driven primarily by social media and the internet – this movement centres around the idea of body positivity. Body positivity is the belief that, no matter what your body type is like, you can learn to be happy with it, and accept it for how it is. The most important point to note about body positivity is that, first and foremost, it is about health, both mental and physical. It doesn’t promote unhealthy eating or not exercising, a common misconception. Instead, it says that if you are healthy and happy with your body, then no-one else has the right to put you down for having the body shape that’s natural to you. Body positivity isn’t about losing weight to fit imposing ideals about what the ‘perfect’ body should look like. It’s about acceptance of one’s own body for how it looks and how it is in its natural state. Women are given tools now that help them to accept their appearance, no matter what shape and size they are. For example, they are given the idea of going to this Bay Area Boudoir Photographer who would take some beautiful shots of them to help boost their confidence and show them that they too can be sexy.

As awareness of this way of thinking grows, more and more celebrities are being heralded as champions of positive body image – comedienne Tina Fey, burlesque dancer Dita von Teese and actress Rebel Wilson have all spoken out against the way many media outlets push a consistent “not-good-enough-unless-you’re-skinny” message. Even people like Tyra Banks, notorious for her status as a presenter on ‘America’s Next Top Model’, where one would assume that promoting negative body images would reign supreme, has spoken out against tabloids that condemn women for gaining any kind of weight.

Body positive figures for men are often hard to come by, as there’s much less pressure on men to conform to ideals surrounding their bodies and the way they should look. However, with rates of eating disorders among men in the 16-24 age group rising exponentially, it’s important that we stress the fact to men as well as women – don’t set yourself unrealistic goals surrounding the way you want your body to look. If you want to go to the gym, do it for yourself, not because you feel pressured by external forces to fit a stereotype, or conform to an ideal.

At its core, body positivity boils down to one overriding concept – that is, that your body is your own. It is the one thing that you have complete and utter dominion over, and you should be able to do with it as you please and, ultimately, to be happy with it. It’s unfortunate that external forces and pressures want to influence the way we think and feel about our bodies, and that they affect us so extraordinarily. However, in the words of comedienne extraordinaire Tina Fey, “always remember the most important rule of beauty, which is: who cares?” Words have never rung more true – don’t let anyone tell you how you should look. As long as you’re happy with your body, does anyone else’s opinion really matter?