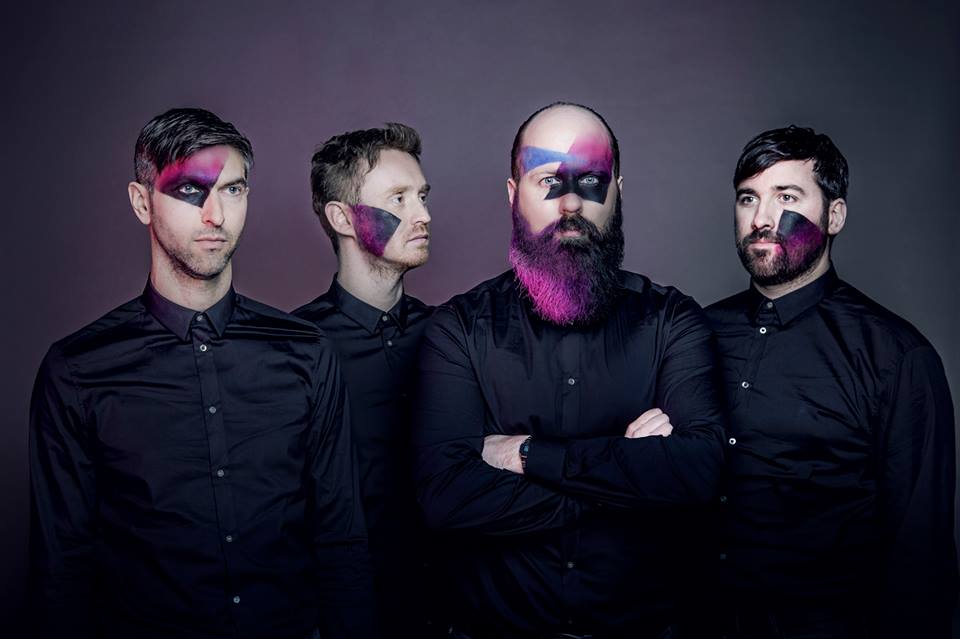 Le Galaxie seem to be enjoying the superstar lifestyle. Meeting them on a glorious Friday afternoon, Michael Pope and David McGloughlin were basking in the sunshine on the rooftop veranda of the Dean Hotel. Keeping up with the superstar mystique, journalists such as myself waited in the lobby until we were brought up to meet them. It’s all modestly glamorous; the water has fresh-cut fruit in it, they have a nice private corner of the terrace and an assistant arrives during the interview especially to deliver a packet of cigarettes to Michael. The lads seem a little humbled by the whole set-up, itching to go talk to a journalist they recognised at the other end of the veranda but worried about breaking the status quo. As many of you will know after their formidable closing set at this year’s Trinity Ball, Le Galaxie are showmen at heart. As such, I have my suspicions that they were enjoying it a little more than they let on.

Once we got talking, lead-singer Michael and bass-maestro David proved to be two of the nicest guys I’ve met in the music industry. They absolutely loved discussing and reliving the production of their upcoming release, Le Club. David told me that they had the pleasure of working with DFA’s Eric Broucek for their latest album. He could hardly hide his enthusiasm while recounting what it’s like to work with a man who has experienced the dizzying career highs of working with LCD Soundsystem. As Michael told me halfway through the interview, everything in their life is about Le Club at the moment.

Presented with a perfect excuse, I had spent the week prior to the interview going back over previous Le Galaxie releases. Undoubtedly, the band have made progress in leaps and bounds since they appeared on the radar about five years ago. When I theorised that they have grown more organic and confident with each new song, David was very quick to agree with me and Michael suddenly started nodding with a renewed enthusiasm. While it hasn’t been a conscious evolution, David told me that they have noticed this progression and accredited it to gathering experience and developing confidence. Even more, they say this is the impression we should expect to take from Le Club when it comes out later this week. They did oblige in offering one scoop about the forthcoming album. ‘Love System’, a song that amazed even them with its success, will definitely feature on the tracklist but not as the song we have grown to love over the past few years.

While they appear wild in demeanour during their performances, Le Galaxie seem incredibly focused and disciplined when it comes to producing new music. Michael, in particular, loved to obsess over every detail, recounting a story about a particular bass drop on the new album. After all of their live shows, the four lads were well used to building it up to a dizzying height. When it came to the studio, however, Broucek informed them that what they wanted to do was simply too big to convey on a record. Michael couldn’t help but grin when he spoke about how much he worked on such a seemingly inconsequential detail before he got it just right. Eventually, he settled on comparing himself to George Lucas, worried about ruining Star Wars with too much digital remastering and hair-splitting. Michael Pope is certainly geeky, but in such a perfect measure that he’s effortlessly cool.

This obsessive showmanship certainly spills over into their live shows, as a large chunk of the Trinity student body can now attest. Personally, I’ve never encountered anyone who has come away from a Le Galaxie show disappointed. In particular, I was keen to hear their take on their recent curation projects such as Laserdisco Nights, Prom Night and, this weekend in the Academy, Le Club. Michael told me that they are pretty meticulous about organising visuals and light shows in advance, a move which gives them a chance to let loose on the night, assured that every eventuality has been anticipated. When I brought up an occasion where I saw them climbing on the light rigs at Electric Picnic, David and Michael broke into massive smiles. Needless to say, that wasn’t preplanned and they smiled like naughty children as they described the hordes of technicians on the side of the stage, yelling at them to climb down. They also offered a few thoughts on how this whole aspect of their musical careers came about. For the band, DJing has always been something they enjoyed and excelled at so it was only a matter of time before they arrived at the idea of incorporating live DJ sets into their shows.

Eventually, the party event of Electric Picnic, Laserdisco Nights, was born. In particular, Michael told me that he has seen a lot of bands perform disappointing DJ sets. While he has no problem with bands spinning the records they love, Le Galaxie wanted to do something more engaging and memorable. When asked why they have such an affinity for ending shows with the Jurassic Park theme song, I just got a grin in response…

As the topic turned towards the Trinity Ball, Michael and David struggled to figure out what it is that fuels students to keep on partying into the early hours of the morning. When I likened it to their now legendary performance on the Body and Soul stage at Electric Picnic in 2013, things became a little clearer. The pair were in strict agreement; they always put on a show that they would definitely attend if they weren’t in the band. Keeping several thousand college students raving until 4am definitely indicates that this is exactly what they achieved this year.

With regards to the other bands, David was most enthused about seeing Basement Jaxx, telling me that he pulled out one of their old records last week and couldn’t believe how well it has aged. For him, this made the stakes very high for this year’s ball. The notion of coming onto the main stage after Basement Jaxx had laid down the gauntlet was intimidating but, at the same time, massively exciting.

Finally, speaking about their recent jaunt to America for SXSW, the lads were humbled by the experience. The best way they could describe Main Street in Austin was by comparing it to Temple Bar on St Patrick’s Day. With kick drums instead of fiddles. Multiplied by ten. They couldn’t quite believe the power of this machine of 1,600 or so bands that descends on the city for one week out of the year. I couldn’t help but ask them who impressed them the most during the week.

Given the sheer euphoric power of their music, I was surprised to hear that they were blown away by the Japanese post-rock band, LITE, who played in a small repurposed cinema. Cameras weren’t allowed inside but David triumphantly announced that he snuck a few videos from the gig! Heading away, I was delighted with my chance to talk to Le Galaxie. I’ve been following them for about three years now but I think I knew what to expect from them from the first time I listened to their music. Certainly, they’re unpredictable and energetic. At the same time, though, they’re clever, focused and, above all else, sound lads.