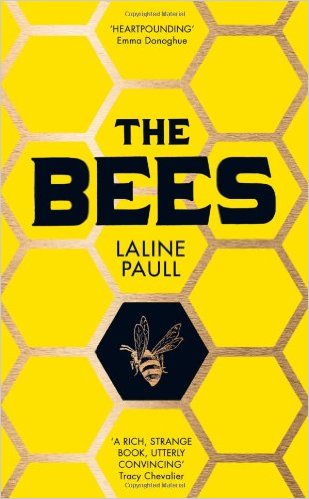 Trying to briefly describe Laline Paull’s “The Bees” in order to encourage people to read it seems like an impossible task. The novel encompasses an incredible scope of themes and topics in its gripping, but winding, plotline, although the knowledge of bees that Paull packs in is impressive. We enter the world of this novel as surprised and disoriented as the protagonist, Flora 717, when she breaks from her waxy cocoon into the throbbing life of the hive. Although Paull attempts to ease us in with a dubious framing device, set on the level of the beekeeper’s son, there can be no true preparation for a totalitarian bee state. This state, we slowly come to realise, although not as slowly as Flora 717 does, is relying on both a chemical and cultish mind control.

I will admit that “The Bees” might not be for everyone. If you can’t suspend your disbelief and accept that bees can make honey pastries and wear a sort of makeup, you may never get picked up by the narrative current of the book. The narrative, while it maintains its grip for most of the novel, is weaker in places.

Despite being a bee, and an ugly one besides according to the other bees of the hive, you cannot help but relate to Flora 717’s struggles as she moves through a society in which she never quite feels she belongs. Her appearance and abilities defy categorisation. While this allows Flora 717 to escape her prescribed lowly job of sanitation worker and climb the social ranks of the hive, it also forces her into being a reluctant rebel and therefore a threat to the stability of the hierarchy.

It is the feudal social structure of the hive, combined with the fanatical devotion to the figure of the queen bee, that contributes to the dystopian sense of the novel. This, no doubt, is why comparisons have been made with Richard Adam’s “Watership Down” and Margaret Atwood’s “The Handmaid’s Tale”. This is also largely due to the gender narrative that runs through the novel. The hive is ruled and operated by female bees, but they are all still, to an extent, subservient to the male drones, who are rather entertainingly caricatured as figures of machismo and misogyny. It is only as the novel approaches its end that we see the inevitable backlash upon the drones for their earlier behaviour. As with many of the other themes raised by the book, our questions as to what Paull might think about this are left unanswered. For some, the lack of ostentatious judgement of the hive, as Flora 717 never seems to escape her devotion to it, could be troubling. However, I would argue that this ambiguity is the best way to provoke serious thought on the most troubling aspects of the hive society.

The abundance of social issues in the novel, and Paull’s attempt at a narrative path that leads us through all the different parts and jobs of the hive, is where it falls down. The story could definitely have benefitted from being a touch more compact, as at some points there is a lull in the grip of the narrative. However, overlooking its possible flaws, “The Bees” is still a triumph in many ways. It is packed with scientific fact interwoven with a sort of magical realism. The beautiful passages of description will show you the world through new eyes, the eyes of the bees.