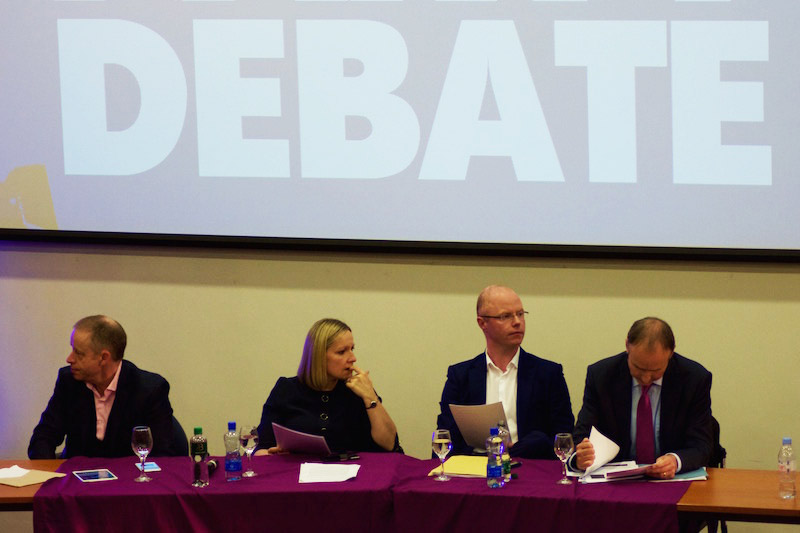 A roundly critical analysis of the state of Higher education, as well as conflicting solutions to the crises it faces, were at the centre of the Trinity College Dublin Student’ Union (TCDSU) Party debate that took place tonight.

Representatives from all eight major parties, including the newly established Social Democrats and Renua Ireland, answered student questions on higher education ahead of the election next year. Themes of inequality in access to education, funding problems and aspirations for a new approach to fixing the system permeated the discussion organised by the union. Education is an ever evolving field, and any development is exciting. These education statistics via Upskilled.edu.au show you how it’s changing all over the world.

Each speaker opened the debate with speeches lasting six minutes, after which a series of questions submitted by members of the audience in advance of the debate were put forward.

The debate, which was chaired by Gavin Dykes, Co-ordinator of the World Forum of Education Ministers, addressed a number of the challenges facing third-level education and students, including funding, the accommodation crisis, and job opportunities.

Speaking before the debate started, Lynn Ruane, President of TCDSU and co-organiser of the debate, emphasised the importance of education to her, growing up as a young mother and community worker in Tallaght: “As long as we continue to ignore education, we will continue to live in an unequal society”. Ruane co-organised the debate with TCDSU Citizenship Officer, Kieran McNulty.

During the debate, all party representatives were agreed on the urgent crisis facing higher education, with the opposition parties were heavily critical of the government’s failure to address this crisis during their term in office. Labour’s Aodhán Ó Ríordáin, Minister for State with responsibility for New Communities, Culture and Equality, expressed all of the speaker’s commitment to a fairer society when he said: “We want to build a society that has underlying thresholds of decency”.

One of the most contentious issues that arose was how best to fund third-level education. Fine Gael’s Ciaran Cannon, the former Minister for Training and Skills, emphasised the party’s commitment to the results of the government’s upcoming report on higher education funding, adding that he was hoping for “some realistic, tangible options that are based on a forensic examination of the sector”.

The report, chaired by Peter Cassels, will be based on the work of the Working Group on Higher Education Funding, set up by the government to examine the current funding model that exists in Ireland, how this should be reformed to address the current funding gap.

Molly Kenny, Education Officer of TCDSU, questioned the speakers on whether they supported the introduction of a loan scheme to fund higher education. Paul Murphy, leader of the Anti-Austerity Alliance, and Sinn Fein’s Peadar Toibin both outright rejected the introduction of a loan scheme for funding students through higher education. Murphy, calling it an “extremely retrograde step”, was highly critical of the the potential introduction of loans, while Toibin stated that his party does not “support debt being created for people getting into college”.

President of the Union of Students in Ireland, Kevin Donoghue, questioned the representatives on their party’s attitude to the growth of zero hour contracts, internships and low paid jobs that often face graduates.

All parties were heavily critical of employers that abuse internships, with Martin stating that “any internship has to be meaningful”, while Murphy called them “blatant exploitation”. However, Creighton was measured in her criticism, acknowledging that while there can be problems of abuse by employers, in the end such work is part of a “voluntary process”

Concluding the debate, Kieran McNulty, TCDSU Citizenship Officer, reiterated the number of students TCDSU has registered to vote, and emphasised the work it will be doing with USI in the coming months to represent the interests of students before the election. McNulty called on the parties to recognise that students are the “lifeblood” of society, but were facing an education system that was “on the precipice of failing people”.