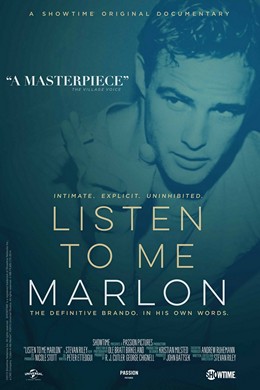 Listen to me Marlon begins with the face of Marlon Brando appearing as a computer-generated hologram, reciting a Shakespeare sonnet. His eyes convey no life, his lips move jaggedly to the rhythms of his monotone words. We eerily observe a man pontificating passionately from beyond the grave. A self-professed imperfect actor on both the stage and in life, his words reverberate coldly, as he cruelly demeans the profession. The renowned performer condemns his craft simply as “signifying nothing”. Such bitter revelations define Steven Riley’s documentary as a raw, honest and exploratory portrayal of Brando’s life in his own words.

Devoid of the biased commentators that plagued the actor throughout his career, Listen to Me Marlon succeeds in granting Brando a new lease of life eleven years after his death. Hundreds of hours of personal recordings are meticulously categorised, revealing his struggles of constant existential questioning and pondering, exposing the inner demons of a perpetually tortured man.

The desolate landscape of the American Midwest in Omaha, Nebraska is the setting for Marlon Brando’s beginnings. The film enters brief periods of self-hypnosis, audio tapes filled with Brando’s self-comforting mutterings. Often he reminds himself to close his eyes and return to his home-town, willing himself to walk “down the sidewalk in Omaha”. Born into a self-destructive family, the young Marlon’s internal conflict began early in life. His mother “the town drunk” passed away too soon. His memories of her are limited to being comforted by the smell of liquor from her “sweet” breath. The unconditional love for his mother, coupled with hatred for his abusive father, were the makings of his renowned spectrum of emotions portrayed on screen.

Marlon deeply despised the Hollywood microcosm, refusing to succumb to the nameless, faceless powers of authority he continued to scorn throughout his life. Brando refutes adoration of his mastery in acting, contending that we as humans are all actors. He describes acting as merely a “survival mechanism, a social unguent, a lubricant”, in truth, an unfeeling opinion of his craft. He claims the reason for the darkness within the confines of a movie theatre is because the viewer is “there with your fantasy”, refuting any credit for his involvement in bringing characters to life. He claims the inexistence of artists or good movies, and consummates his defilement of cinema with a disheartening defiance that “it’s all bullshit”.

As Marlon’s monologue continues, his voice juxtaposed against the images of his world-famous performances, one cannot help but wonder why arguably the most influential realist actor maintained that everyday acquisition of social roles is on par with his own legendary acting.

As Brando’s star intensified, his eccentric behaviours escalated. Riley documents the composed young man that accepted his first Academy Award for Best Actor in On The Waterfront in 1954, with dignified grace thanking those directly involved for his being “so very glad”. His boyish smirk and refined charm disclosed nothing of his antagonistic behaviour to come. In fact, it was in stark contrast to his second Oscar for his role in The Godfather when he shunned the Academy’s honour in favour of demonstrating the misrepresentation of American Indians in the film industry. While Marlon despised the industry itself, his raw energy on screen garnered mass attention from women.

Listen to Me Marlon charts Brando’s tribulations in a life marred by misfortune and resentment. He sporadically exclaims “Mar, Listen to me” throughout, willing himself onwards. The mere existence of these recordings demonstrates a longing for his internal frustrations to be heard. While Listen to Me Marlon is uniquely insightful, the documentary lacks a compelling structure, as it floats aimlessly on. Even a life as extraordinary as Brando’s cannot be expected to hold a film of its own accord, with Riley’s documentary severely lacking in direction. In addition, it must be noted that a film based solely on the personal recordings of an individual infamous for his muttering, only accentuates the ill-fitted format of the film, as recordings are frequently inaudible.

This biopic succeeds in excavating insights of the man we never truly knew. Marlon Brando was acutely aware of his talent to deploy his acting instruments, but thought nothing more of it. Any deeply held appreciation for his mastery is cruelly eclipsed in this film, as he degrades a talent he clearly took for granted. To hear from the horse’s mouth, a heartless demeaning of a natural talent is almost fraudulent, tarnishing the magic of his roles. Throughout we witness a stark portrayal of a man desperately trying to make sense of his thwarted reality. He wanted to rid audiences’ delusional fantasies that he was somehow special, insisting that “anyone really could have been a contender”.

Through his mutterings in the film, Brando’s demons overcome him, callously taking the magic out of his performances.  Marlon wanted to remove all mystique, and return to a reality where dreams do not exist. He wanted people to stop believing in him, because Marlon never really knew what to believe in. So if you believed in Marlon, perhaps you should stay at home.