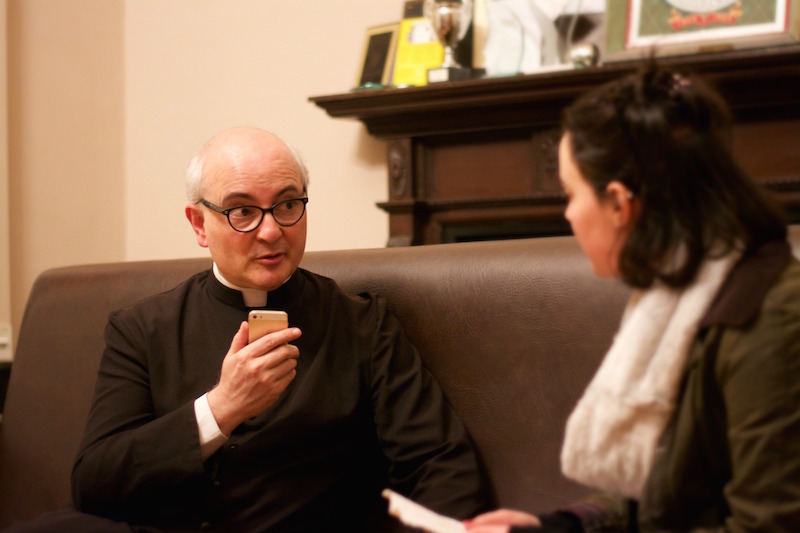 It’s not unusual to see lengthy queues outside the Graduates Memorial Building (GMB) as famous celebrities come to speak to students in the College. Yesterday evening, however, the queue served as testament to the interest that the darker side of the Catholic Church holds for many, as Father Jose Antonio Fortea, one of the world’s most renowned exorcists and experts in demonic possession, addressed the Theological Society (Theo).

The tension in the room was palpable throughout the talk. After a short introduction by Aisling Crabbe, Auditor of Theo, silence filled the room as he entered. He started off apologising for his voice which was very quiet. However, this only added to the atmosphere as everyone eagerly leaned in to better hear what was being said.

The talk focused on the nature of evil. However, his view on evil was now what you might expect from an exorcist. He spoke about how, ultimately, the evil in the world is determined by God. He spoke of briefly how he tackles the attractive side of evil – the side people avidly seek out. However, he focused on a discussion of theology rather than physical manifestations of evil. If you had come to hear about demonic possession, speaking in tongues and levitating bodies, you were likely to be sorely disappointed.

Fortea does not believe that hell is a place where someone is made to suffer by God. For him, the pillars of hell are made up of the hatred within a person. These theoretical reflections, he says, are manifested in a tangible way in exorcisms. Usually those afflicted by a demon will not spit out glass or nails, or even speak in different languages. He reiterates that these are just people with a negative presence within them. When he begins to pray they just become furious and cry, sometimes biting and lashing out in anger. Usually when he blesses someone, nothing happens. He only sees about six actual demonic possessions a year, if even.

He told the room of of one experience he had when he was praying for a possessed lady and it began to rain. As the rain intensified it turned into hailstones and wind, and got stronger and stronger until it took part of the church’s roof off. He claimed he was more rational before this moment, but that these events changed how he saw the world.

“If someone were to return to a university from Latin America with a new species of bird, no one would question its validity”

Speaking to The University Times, he spoke about an experience he had when visiting Rome to deliver his thesis on demonology. After half an hour of walking he felt that someone was pulling down on his briefcase. His first thought was that he was suffering from a brain hemorrhage. It was only later he considered that it could have been a demon.

Father Fortea did not always want to be an exorcist. When he began his studies he wanted to focus on the history of the Catholic Church. However, his mentor encouraged him to focus on demonic possession and this is what he wrote his thesis on. He explained that, even after he began to practice, it took him years to accept this was going to be a facet of his life.

Even in his first case he did not want to tend to the woman. He told me that he would have sent her to someone else if the closest option wasn’t Rome. He planned on stopping until he realised that the experience was so beneficial to those he was helping.

Fortea believes that a thread of rationalism has formed within the Church, in which priests try to be as scientific and rational as possible in order to be taken seriously. This, he claims, is why many priests don’t believe in the Catholic teachings of exorcisms. He claimed that people dismiss the spiritualism as its “bah, a question of religion”. In contrast: “If someone were to return to a university from Latin America with a new species of bird, no one would question its validity.”

He argued that you can’t rely on science to tell us if demons or mystical presences exist. Instead, you need to rely on someone who has seen dozens of cases and examples. This cannot be dismissed because it’s seen as superstitious or unmodern: “If this spiritual world exists, it does. And, if it doesn’t exist, it won’t just because we say it does”. He has come to the conclusion that this spiritual world full of demons and mystical presences exist, and that it’s not a backwards thought that is inherently anti-scientific.

Fortea says he can’t help but be pessimistic on the role of the Catholic Church. He believes that Europe is on the path to forget about the Christian faith: “I think that society will become increasingly aggressive towards the Catholic Church. Not that we will be thrown to the lions, no, but we face a legal prosecution and through law the Catholic Church will be pushed to accept society’s views on specific issues. And if not, they will be fined”.

He does, however, express some hope: “I believe that there will be a huge purification throughout the Occident. God will act so that Europe will return to the teachings of Jesus but first a purification must take place and this will be done through castigation. This is really just my humble opinion”.

During the Q&A session, one audience member asked Father Fortea to exorcise the room. However, he said that nothing would happen in the room as it’s not the right audience for it as they were not religious and they were not in a spiritual setting. He said that if he was with a religious audience in Latin America a group exorcism would be more likely to often manifest in several demonic possessions.

However, before we left he asked myself and our photographer if he could bless us. He asked us individually if we felt a warmth coming down through us and we had to admit that we did. Before we left he assured us this is because we are both free of demonic presences as, if we had been, our reaction would have been very different.