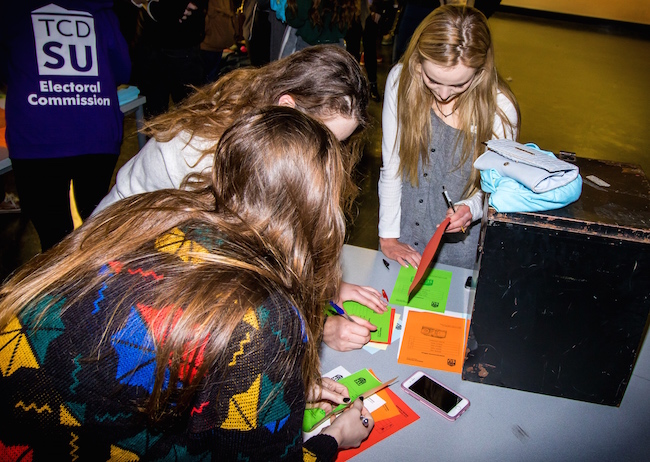 Only 3,894 students voted in this year’s Trinity College Dublin Students’ Union (TCDSU) elections, an 18 per cent decrease from last year.

Last year, 4,765 votes were cast in the TCDSU election, with 4,690 votes declared valid. Arguably, this large turnout could have been down to the large public profile of current TCDSU President, Lynn Ruane.

While turnout at the numerous hustings across the two weeks was high, a large proportion of the audience was made up of campaign teams.

Indeed, at Dining Hall hustings on February 8th, the first day of campaigning, the crowd was noticeably smaller than last year.

Additionally, last year’s race was much closer, something which may have helped contribute to increased turnout. The University Times’s three-day in-person poll of 1,007 students this year predicted a landslide victory for Kieran McNulty, with 50.9 per cent of first preference votes, which may have made students less inclined to vote.

Last year however, The University Times three-day in-person poll of 857 students put Lynn Ruane and Conor O’Meara at 42.7 percent and 34.5 per cent of first-preference votes respectively. The two other candidates, Gabriel Adewusi and Nessan Harper, were predicted to get 11.9 per cent and 10.9 per cent respectively.

When both Adewusi and Harper had been eliminated, the poll predicted 53.7 per cent and 46.3 per cent of the vote for Ruane and O’Meara respectively.

While the actual election results put Lynn on 2,335 votes and O’Meara on 1,939 votes on the second count, this small difference in the polls between two popular, but very different candidates, may have contributed to the large turnout, in comparison to the rather more muted response of the electorate this year.