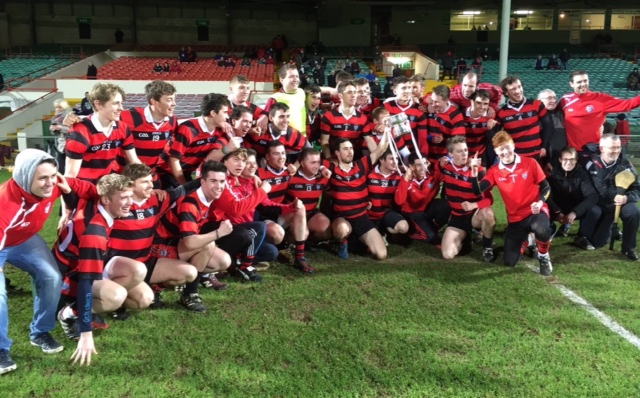 After ending a fifty-year wait for their first-ever Ryan Cup success last year, the Trinity hurling team have developed an appetite for silverware. Their will to win was thoroughly tested over a weekend of hurling hosted by Cork IT. First up was a match against a much-fancied IT Tralee side in a semi-final fought out in freezing conditions. Even though the neutral Cork venue meant that Tralee enjoyed most of the benefits of a home advantage, the Trinity hurlers arrived on Friday in a confident mood having topped their Ryan Cup group earlier this month.

In fact, of more concern to Trinity was the weather, as players were struggling to keep warm in the wind and rain even before the ball was thrown in. Fionn O’Riain Broin had clearly decided he wasn’t going to hang around a moment longer than necessary when he scored the first point of the game within moments of the referee doing the honours. The bright start was followed by a succession of wides as numb fingers made simple mistakes, with Trinity in particular guilty of compromising on accuracy in the cold.

Still, the team worked hard playing into the wind to keep in touch with Tralee. The half-time score 0-5 to 0-4 in Tralee’s favour meant that the game was finely poised for a nail-biting finish. By now it was apparent that these were the competition’s two top prospects fighting for one spot in the final, and so the stakes could not have been higher. But the players were probably too cold to think beyond the next pass, the next shot. Such was the concentration on display here that even when they were moved to another pitch because of the conditions, the player’s focus did not break. Both teams were running themselves into the ground for every point.

With about ten minutes still to play, Trinity equalised to bring themselves level at 0-6 to 0-6 for the first time since early in the opening stages. Then, rather than wilt under the mounting pressure, they never looked back. Eoghan McNamara came off the bench to put Trinity back in the driving seat before one more point and the final whistle saw Trinity through to the the final, 0-8 to 0-6 winners.

The next day Trinity faced Queen’s University Belfast in the final. This time the weather was much improved, a situation that certainly suited Trinity well as they stormed into a 0-6 lead in matter of minutes after some great play from O’Riain Broin and Thomas Mitchell. Queen’s were allowed the space to grab some scores, but Conor O’Carroll saw their two points and raised them a goal in a frantic period of play. Eoghan McNamara came on after his semi-final heroics for Cian O’Dulaing at corner-forward after the latter was clattered in a tackle. The sides traded points before going in 1-10 to 0-3 at the break.

O’Carroll picked up right where he’d left off once the sides changed ends, cutting inside and lashing the ball into the net for his, and Trinity’s, second goal of the game. The Queen’s defence could not handle O’Carroll’ movement and when two players went to him there was space elsewhere on the pitch for Trinity to capitalise on. From these pockets of space Trinity kept taking their points relentlessly, stretching the lead to 2-14 to 0-7. If it is the mark of champions to keep scoring right to the finish, even with the win secured, then Trinity seemed intent on crowning themselves in more ways than one.

Ciaran Fagan came on for Cillian Heeney to keep things moving in the late game. In the last throes O’Carroll found the time to provide icing for the cake and complete his hat trick, leaping to catch the ball before turning and burying it in one smooth motion. Cue delighted Trinity celebrations both before and after the full-time whistle, with the winners well deserving of the 3-16 to 0-7 score line.

Now the question must be asked, is the team ready to move up to the top division in the country, the Fitzgibbon Cup, next season? This success for the second year in a row, along with the convincing nature of their win, would suggest they are ready, but every year sees a slightly different approach as players old and new have to gel before they can reach their potential. Whether Trinity hurling will take the plunge remains to be seen, but for now they’re happy to celebrate another impressive cup victory in their customary low-key fashion.