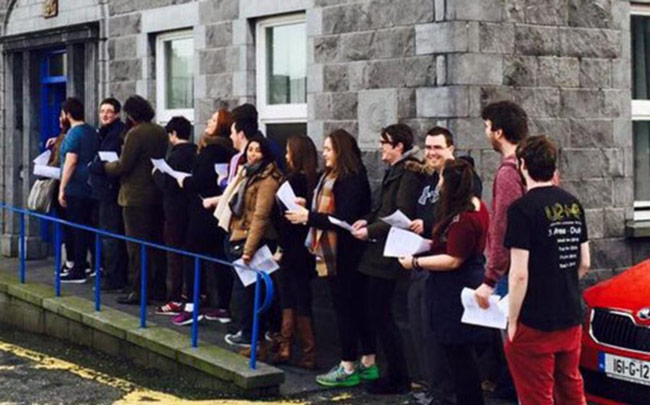 To question the timeless character of Yeats’s assessment of Ireland – “No country for old men” – is to reject the striking reality of the nation’s demographics. Ireland is a country with an extremely young population. The Central Statistics Office (CSO) estimates that 42 per cent of the population are under the age of 30, with 400,000 people between the ages of 18 and 25 years. Compared to any other country in an ageing Europe, Ireland is a country of the young. Naturally, the scope of interests and backgrounds that define Ireland’s youth is very broad, but nevertheless, it is possible to find some common characteristics amongst this group. In a striking deviation from European trends, the majority of people aged 18 to 22 in the country are participating in higher education of one form or another. This majority of young people who are attending third-level institutions make up a very significant proportion of the 173,000 people in full-time higher education in Ireland, according to the Higher Education Authority.

However, despite the sizeable stake that they hold in Irish society, young people have traditionally been less engaged in political activity. Indeed, as much as 30 per cent of 18- to 25-year-olds are not registered to vote, compared to just 10 per cent of the whole population, with many more registered voters besides that absenting themselves from the voting booths on polling day. However, young people that are registered are more likely to actually cast their vote than average, with 54 per cent of 18- to 25-year-olds on the electoral register turning out to vote, about 12 percentage points more than the whole population. This data gives us a very clear message about the obstacles to youth engagement in politics. The problem lies in getting young people to register, not with the participation of registered voters, at least not in comparison with the population at large. This does not prove surprising, particularly considering the majority of young people in Ireland at present are in third-level education, and a great number of these are likely to be living away from home for the first time, finding their feet in a new home and indeed a new electoral constituency. These findings can inform how we reform the electoral system, perhaps by having automatic registration upon turning 18, as is the case in Germany. “Simple changes to registration laws and greater use of postal voting would increase voter turnout in general, particularly the young”, suggests Gail McElroy, the head of the School of Social Sciences and Philosophy and Professor of Politics at Trinity College Dublin. Such a system would undoubtedly have a greater impact on the youth turnout in targeting the principal impediment to their participation.

Thus, a young electorate may be one that is more willing to focus on a party’s policies and ignore their historical baggage.

However, there are signs that change is looming ahead with this election. This past year has seen perhaps the most dramatic mobilisation of the youth vote in the state’s history. The marriage equality referendum was the focus of an array of voter recruitment drives by the Union of Students of Ireland (USI) which resulted in the registration of some 10,000 student voters in a single day. The increased mobilisation of young voters following these registration drives is apparent. Kevin Donoghue, President of the USI, told The University Times that he recalls how students “would come up and sign up themselves and then take away 30 or 40 forms to sign up their class as well”. These developments have seen young voters begin to overcome the major barrier to achieving the full extent of their electoral influence, in registering in greater numbers. The same-sex marriage referendum has perhaps created a more positive and participant attitude to politics among young people. “So many people are registered from the marriage equality referendum and now people feel as though they can actually make a difference,” Lynn Ruane, President of the Trinity College Dublin Students’ Union told the The University Times, adding that “there’s also cohort of people who became involved in the protests against the water charges who’ll vote”. This, combined with the students’ higher propensity to vote once registered, is likely to give the young electorate a magnified impact on the upcoming general election.

What effect can this ever more engaged youth electorate have on the general election? If young people vote in much the same way as the rest of the population, then there is little reason for political parties to take much notice. A uniform increase in the youth vote could very well leave no party with any electoral gain relative to the others. However, there is evidence to suggest that the young people of Ireland diverge slightly from the population at large in terms of their political preferences. “They’re a diverse group. They’re not a monolith”, suggests McElroy, nevertheless conceding that “there may be a slight centre-left bias”. This bias is supported by the findings of the the National Youth Council of Ireland, who note that at the European and local elections in 2014, those aged 18 to 25 voted disproportionately in favour of Sinn Féin and Independents by six and nine percentage points respectively, relative to the rest of the population. Furthermore, Labour and Fianna Fáil benefitted from an extra percentage point each from the youth vote. The increases in the support for each of these parties among the young people of Ireland came largely at the expense of Fine Gael, suggesting that young people may be somewhat disillusioned with established parties and are seeking a new movement on which to focus their political support. The increased preponderance of small parties, particularly those that have formed in the lifetime of the 31st Dáil, such as Renua and the Social Democrats, may give young voters a potent outlet for this disillusionment. In addition, Red C opinion polls from this month continue to demonstrate that Sinn Féin is the party that commands the highest levels of support among youths. However, while some peculiarities of the youth vote clearly emerge, it is certainly not the case that young people vote as a cohesive block, and it is perhaps this that limits their electoral influence. The difficulty in placating the diverse interests and preferences of the youth reduces any potentially decisive impact on the policy calculus of political elites.

Furthermore, it may be the case that young voters approach elections in a manner altogether distinct from previous generations. Individuals develop habits and routines over the course of their lives in relation to voting, patterns of behaviour which are remain undetermined in student the student electorate. “What is distinctive about young people voting for the first time is that they aren’t in the habit of voting for anybody in particular”, Michael Marsh, Professor of Comparative Political Behaviour at Trinity told The University Times. This may give an advantage to the numerous smaller parties, many of whom have only formed since the last general election, who will compete on a more even psychological footing in the minds of first-time voters.

In addition, the preponderance of history in Irish politics is clear, with the principal divide upon which elections have been fought – that is between Fianna Fáil and Fine Gael – being based on the Civil War and nationalist politics of the 1920s, not on ideological grounds. It may be the case that young voters are less attuned to the historical meanings and symbolism associated with the established parties. “Young people don’t vote necessarily for who their parents vote for”, Donoghue told The University Times. “Young people will vote for what a party stands for rather than what it stood for a hundred years ago.” Ruane argues that, in particular, “students vote based on social issues”, also pointing out the differences in the means with which students engage, noting that “we’ve seen a lot of interaction recently with social media and Smartvote about the election”. An in-person poll of 1,007 Trinity students conducted by The University Times last week confirms this theory, with over 30 per cent of students saying that social issues were the single biggest motivating factor behind their first-preference vote. Thus, a young electorate may be one that is more willing to focus on a party’s policies and ignore their historical baggage. This may grant manifesto promises and the substance of party commitments well-deserved centrality in this election campaign, particularly regarding higher education. Indeed, Adrian Kavanagh of Maynooth University has noted that Irish political discourse is beginning to reorient itself along the more conventional political lines of the right and the left rather than the nationalist politics of years gone by. Perhaps this is a sign that our political system is already adapting itself to the novel preference distribution of the emergent and engaged young electorate.

This issue goes to the heart of students’ interaction with and access to higher education and is likely to command the attention of the newly engaged student electorate.

Though their specific viewpoints might not be totally unitary, higher education is undoubtedly going to be at the heart of the concerns for a young cohort, the majority of which are studying at third-level institutions. The focus on policy substance that young people are likely to be affected by means that political parties may need to give more attention to their approach to this aspect of our education system in order to capture an electorate that is perhaps less constrained by the established loyalties and party identification. The increased engagement of young people can only incentivise politicians to deal with the funding crisis in higher education in a meaningful way and to go well beyond the cursory dismissal thereof that was painfully evident at the last election.

In this regard, students are faced with a difficult decision. On the right, Fine Gael and Renua offer income-contingent loans while Labour in conjunction with most of the parties in opposition, from leftist Sinn Féin to the traditionally centre-right Fianna Fáil, are advocating for reductions in the student contribution charge of varying sizes. This issue goes to the heart of students’ interaction with and access to higher education and is likely to command the attention of the newly engaged student electorate. However, students’ engagement is also likely to centre around the issue of funding for universities. Greater funding to the universities has been promised across the the political spectrum, but it may be the case that such an issue is likely to be have greater appeal to middle-class voters than to the more disadvantaged strata of the electorate, perhaps committing parties like Labour, Fine Gael and Fianna Fáil that bit more to such a policy.

Although students and the young population more generally are poised to exercise a greater influence on the approaching general election campaign than ever before, this influence may become torn between two issues upon which the political establishment diverges in a manner that fails to provide an adequate fit for what might be thought of as the ideal scenario for students: lower fees and increased exchequer funding for universities. Forced to choose between these two outcomes, the priorities of students may begin to differ and there may be further scope for the fragmentation of the student vote.