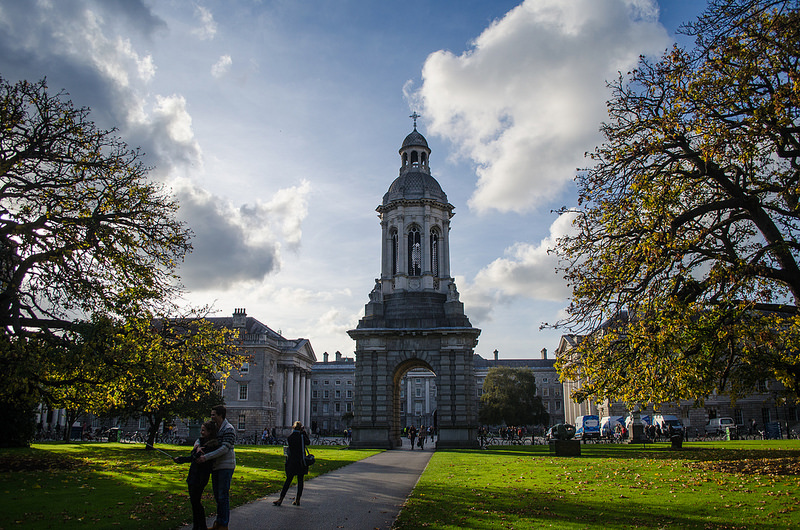 The opening sequence of Inside Trinity declares: “This is the year in the life of a campus that dominates the city’s landscape but somehow remains hidden.” For over 400 years, Trinity has stood as a 50-acre fortress in the middle of Dublin. The RTÉ documentary aims, over four episodes, to explore inside the walls of the university and talk to the people who work, study and play within its hallowed halls. The series follows students and staff throughout the year as they go about their daily lives, giving those around the country who may have heard of Trinity but never interacted with it the chance to learn things they might never have learned otherwise and to give its students, staff and alumni a different perspective on where they’ve spent much of their lives.

Speaking to The University Times, Ronan O’Donoghue, the documentary’s director, said he was eager to take what people already knew of Trinity and explore it a bit deeper: “I was kind of keen to take what I figured were the perceptions of Trinity and explore them because you can make a year in the life of any university and it would be interesting, but Trinity just has so much more.” From the Book of Kells to the Science Gallery, Trinity has a diverse range of attractions suited to every person. “My main idea was the balance between tradition and progress”, explains O’Donoghue. While it would be impossible to capture every aspect of the college year, Inside Trinity looks at the college year through the eye of the four seasons and explores different key events associated with each term. The first episode begins in Autumn as Trinity welcomes a batch of new first-year students to the college.This pattern continues throughout the documentary as the film crew follow students through Trinity College Dublin Students’ Union (TCDSU) elections, sporting triumphs, academic achievements and a vibrant social scene. Addressing first years in the first episode, Provost Patrick Prendergast reminds them that: “Your time in Trinity will determine how you view the world and how you view yourself.” This serves as a reminder to all students past, present and future of the influence that one institution, especially one as prestigious as Trinity, can have on your life.

It was kind of a natural progression to come back. You wouldn’t turn down a request like that without thinking very hard about it but it was a pretty easy decision

The project came about after the success of another Trinity-based documentary, A Parting Gift, which looked at the donation of corpses to medical science and education. Filmed over 18 months, the two-part narrative followed the bereaved families coping with their loss and the first-year medical students benefitting from the generous donations. Loosehorse, the production company responsible for both A Parting Gift and Inside Trinity, enjoyed relative success at home and abroad with the series. Nominated for an Irish Film and Television Academy (IFTA) award and the prestigious Prix Europa, the company saw the potential for a follow-on series focusing on the entire university. The college was happy to co-operate with the company on another project. Speaking to The University Times, Tom Molloy, Trinity’s Director of Public Affairs and Communications, who joined Trinity’s team after the series was given the green light, says that the College was happy to work with a company who had proven themselves to be adept at what they do: “They showed to us that they could deal with sensitive topics sensitively, and then it was kind of a natural progression to come back.” The decision to allow Loosehorse to film the documentary wasn’t a difficult one. “You wouldn’t turn down a request like that without thinking very hard about it but because there was form it was a pretty easy decision”, explains Molloy.

The actual process of researching, filming and editing the series took several years to complete. According to O’Donoghue, producers spent 18 to 24 months researching the project before a single camera was set rolling. Over the course of a year, the film crew spent 50 days in Trinity shooting everything from scenic drone shots to one-on-one interviews with various figureheads and students in the college. “We were reasonably focused in what we did”, explains O’Donoghue. “You can’t control certain things. So its keeping track of where you’re at and making sure that something you film in August 2015 is going to have some kind of connection to something you film 12 months later.”

To ensure the correct representation of students, Trinity appointed a steering group who had access to rough cuts of the documentary before it aired. Prof Patrick Geoghegan, who lectures in Trinity’s Department of History, was appointed to this committee, which consisted of academics, administration, representatives from TCDSU and various other people from around College. Speaking to the The University Times, Geoghegan says that it was their responsibility to ensure that everyone was fairly represented: “We had to a duty of care to the students. You didn’t want anybody to suffer embarrassment or distress because of anything that might be done.” Both Trinity and the production company were also cautious that the documentary didn’t turn into a promotional video of the college. “We sent out calls to the college community if they knew of things that were happening during the year to let us know”, explains Geoghegan. “Occasionally, you know, we would pitch them ideas, but the production company were independent and that was important for them.”

The College, however, did still maintain control over where the film crew could shoot and when. All commercial filming on college grounds must go through the Office of Public Affairs and Communications, and Molloy, along with the rest of the office team, acted as a liaison between the College and the production company. “We would help them, set them up and kind of pave the way or, of course, say no”, explains Molloy. “We tended not to as there’s a law of diminishing returns.” Once the project was filmed, there were more opportunities for the steering group to ensure that nothing was taken out of context or was factually inaccurate. Geoghegan remembers one incident early on involving former TCDSU President, Lynn Ruane, and the other members of the union. Footage shown to the steering committee appeared to show the advocation of drugs use rather than the safe use drugs policy that they were actually discussing. They pointed out the error, and the scene was edited to accurately reflect events. “It was more kind of an occasionally advisory thing”, says Geoghegan of their role.

The documentary has received a warm welcome from students, graduates, academics and those with no affiliation to Trinity whatsoever. “I think people want to believe there is universities full of boffins”, muses Molloy. “You know that somebody is in charge. They don’t really believe in the church anymore or the politicians, and maybe they want to believe there are academics out there who are thinking about our problems.” Geoghegan hopes that the documentary will encourage prospective students and their parents to consider Trinity as a place that is open to people from all backgrounds and interests: “I think what the Lynn part showed was that people can have this wrong attitude to Trinity, and it actually showed that we have people from all over.” Molloy believes the proof of the success of the documentary will become clear when the CAO figures for next year come out: “We’ll see the number of first preferences from the CAO next year, and if that’s risen, I’ll be delighted, and if it’s fallen, I’ll scratch my head.” The overall reaction online to the documentary has been a mixture of wonder and nostalgia with #InsideTrinity trending on Twitter during the first episode.

There’s no denying that there’s a certain fascination with Trinity and the mysteries that surround it. There is also a fascination, however, with college life. “Just how people fill their day was kind of fascinating, and the different things they do in the same place which is essentially about you know teaching and learning”, says O’Donoghue. “I think it gives you a flavour of Trinity”, says Geoghegan. “It’s not everything, but it gives you a flavour of some of the things that go on and some of the people that work here. But there are so many more great people who work here who are involved in so many things that aren’t covered.”