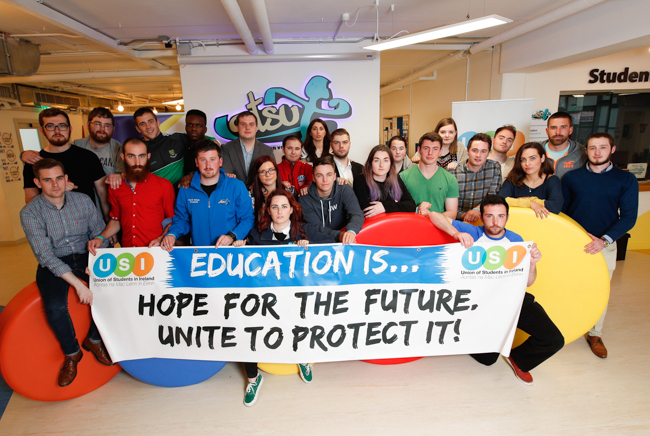 Students often suffer from two popular, if seemingly mutually exclusive, stereotypes. The first is that they are passionate activists, rarely seen without a placard and megaphone in hand. The second is that students are also Netflix-loving slacktivists, more likely to stay in bed and tweet than engage in any real societal change.

The Union of Students in Ireland (USI) March for Education, which is taking place this afternoon, might try and challenge the latter idea. The march will attempt to highlight the challenges facing the third-level sector, which since 2011 has faced a significant decline in state funding. Now, as the Oireachtas Education and Skills Committee sit down to deliberate on a new funding model for higher education, USI are hoping that upwards of 5,000 students will march on Dublin today to make a vocal argument for the value of a publicly funded education system. The union is also hoping to have a more broad-based grassroots presence at the march, with representatives of various campaign groups and unions in attendance, from the Irish Federation of University Teachers (IFUT) to the Irish Rugby Union Players Association.

Such a figure relies on students making an effort to turn up. The signs, so far at least, do appear positive. For the last few weeks, students’ unions across the country have been campaigning and encouraging their students to make the trip to Dublin for the march, with some unions going to more extreme lengths than others to get their students to attend.

Maynooth Students’ Union (MSU), for instance, are offering to pay one student’s contribution fee for a year if over 500 NUI Maynooth students attend the march today. Speaking to The University Times, MSU President, Dillon Grace, admitted that the offer was “one of the more unique methods out there”.

“We’re going out tomorrow to show our support for publicly funded higher education, and I thought it would be an appropriate tool that if students were supporting free education, that Maynooth Students’ Union would try and support one of its students attending college next year, and to try and reduce the barriers and the burdens that students face”, he said.

The offer seems to have worked. As of last night, around 550 NUI Maynooth students have bought bus tickets for the march. “Students were excited at the fact that the union was trying to help out with the burden that going to college can be”, Grace said.

Dublin Institute of Technology Students’ Union (DITSU) are also trying to make their union stand out from the crowd, and is encouraging all of their students in attendance to wear black. Speaking to The University Times , DITSU Vice President for Education, Kieron Pierson, said: “We’re aiming for high numbers, very high numbers, so we want to show that DIT students care about this issue, it’s an issue that affects them. And even if it doesn’t affect them, it’s going to affect someone coming after them.”

USI have been working with individual unions across Ireland in an attempt to help encourage attendance at the march, and had set a target for every union to recruit 10 per cent of its student population for the march.

President of the Galway-Mayo Institute of Technology Students’ Union (GMITSU), Amy Kelly, is confident that her union has met that target. Speaking to The University Times, Kelly said she expected approximately 630 students from the institute to attend the march. Pointing to an obvious “appetite” for the protest, she said: “People are just really anxious to go, and we’re still getting texts and stuff and people are hoping to get tickets tomorrow morning at the bus.”

GMITSU’s approach, according to Kelly, has been comparatively simple compared to other colleges and universities. “Once we explained the reasoning behind it, it kind of spoke for itself”, she said. “The biggest thing is that if loan scheme did come in, there’s no evidence that grants would be there, so a lot of our students in GMIT would be on grants, so it would really affect them. So they really want to stand up for that as well, and make sure they have something in the future as well.”

A number of students’ unions have taken to producing videos to get their message across. The video produced by Dublin City University Students’ Union (DCUSU), has been seen by 11,000 students, according to DCUSU Welfare Officer, Cody Byrne. Speaking to The University Times, Byrne said the level of interest in the march has surprised him. The union is expecting 800 students to attend, and according to Byrne, people are “excited by it”. The union has also organised their union’s class rep training to coincide with the end of the march, in order to encourage more students to attend. Producing videos can be a good way to get people interested in what is going on. Using companies like ASL Productions can help with getting out that message.

IT Tralee Students’ Union (ITTSU) have also launched a video. Speaking to The University Times, the President of ITTSU, Steve Clifford, said: “We wanted to show a visual representation of what a publicly funded model would look like and what a loan scheme would look like.”

The video shows Clifford struggling against two bouncers, representing fees on one side and loans on the other. Over images of disappointed, frustrated students, Clifford warns that the introduction of a loan scheme would mean “the place becomes dull, lifeless and the student engagement and experience that was once alive in college has simply disappeared”.

“We need to be united in our fight for a restoration to appropriate levels, so the universities can function”

Clifford said the video has had a big impact on students: “We put out the video on Sunday, and we filled another bus in two days.” The union, he says, is hoping 100 students from IT Tralee will be present at the march today.

Most unions have found it unnecessary to go much further than warn about the impact of loan schemes, and the importance of publicly funded education. USI Vice President for Campaigns, Daniel Waugh, echoed this sentiment: “This campaign is an easier sell. The idea of, ‘Do you want fees increased from €3,000 to €5,000, and you’ve a loan to take it out?’ People are kind of like ‘Oh no, not really’.”

Waugh praised the co-operation between students’ unions across the country: “Student unions are helping other student unions, and that’s great, and I suppose that’s what USI is all about.”

One of the biggest events organised to attract students to the march has been the gig organised by Trinity College Dublin Students’ Union (TCDSU) in conjunction with Metropolis. Since Freshers’ Week, the union has been promoting the march to first and second year students. TCDSU President, Kieran McNulty, said: “I think we’ve got our message across, and I’m happy with it.”

Like other unions, TCDSU will be handing out t-shirts and goodie bags to students who attend the march, and McNulty is confident that the union has done enough to see over 250 Trinity students attend the march.

Trinity’s Graduate Students’ Union (GSU) have also been making efforts to get their students to attend. An email sent out to all postgraduate students, signed by GSU President, Shane Collins, and McNulty, called for them to make their voices heard at the march. Speaking to The University Times, Collins emphasised that “we need to be united in our fight for a restoration to appropriate levels, so the universities can function”.

TCDSU and the GSU, however, have been lucky in some regards. Not only is Trinity in the centre of Dublin, just a stroll from where the march will begin, but the university has also done its best to facilitate students missing class to attend the march.

“From the Provost down, the response has been very, very very positive, that something needs to happen and the issue needs to be kept in the media”, McNulty said.

Trinity isn’t the only university to show such support to student activism. Speaking to The University Times, Letterkenny Institute of Technology Students’ Union (LYITSU) President, Dylan McGowan, said the college has agreed “to free up critical academic work so students can actually attend”. McGowan, who is expecting the largest turnout at a protest in the union’s history today, has organised a barbeque upon return to Donegal for all students who make the trip to Dublin for the march.

Kelly too pointed to the support her union has received from GMIT’s senior management: “There’s no assessment, labs, mandatory classes, nothing like that on tomorrow, to facilitate people going.” University College Cork (UCC) have also made attempts to support students attending the march. Speaking to The University Times , Kate Moriarty, Deputy President and Campaigns Officer for University College Cork Students’ Union (UCCSU), said that the College had told staff not to count students as absent who attend the march.

Such enthusiasm isn’t replicated across all universities and colleges. Byrne said that after little response from the DCU, the union “took it on ourselves as a union to let the college know”. After emailing various schools and lecturers within the university, Bryne is confident that most of the staff within the university support the march.

While senior management of Dublin Institute of Technology (DIT) have taken no official position on students attending the march, Pierson is confident that the support of staff will help improve turnout. The Teachers Union of Ireland (TUI) have asked their members in DIT to “let students off class and push any assignment deadlines that happen to be on the day”. Pierson is “cautiously optimistic” that the union could see between 1,000 and 1,500 students from the college attend the march.

Waugh thinks unions have got better at activism in recent years: “There’s a real determination. Everyone has their own video, their own t-shirts, everyone has been making placards the last two or three days. There’s a sense of community, and everyone has banded together.”