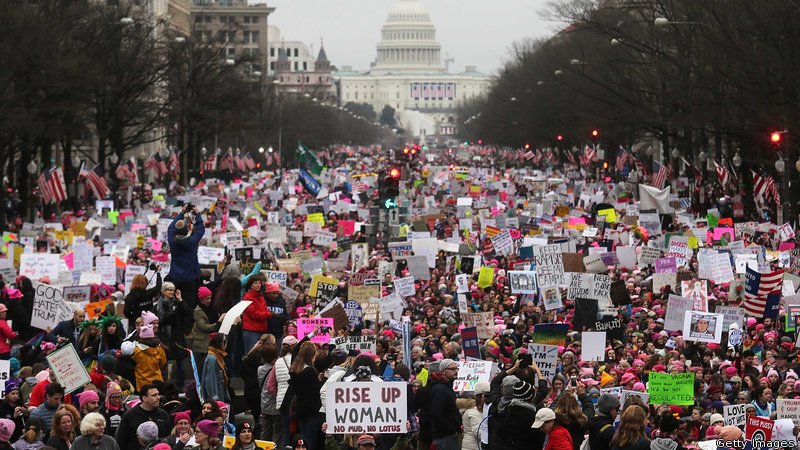 When I initially set out to write this article, it was going to be a rebuke to protests held in Dublin on Friday against the inauguration of Donald Trump. Despite maintaining the position that minor rallies held on Ha’penny Bridge and outside the Central Bank were futile and largely self-fulfilling, my views on the wider issue of protesting aspects of Trump’s ascension to power have changed over the weekend. This was a result of the hundreds of Women’s marches that took place across the globe on Saturday.

Like most, I find the new president a pretty deplorable character. His short and divisive speech on Friday in which he proclaimed his country’s mantra from now on will be “America First” resonated almost exclusively with his loyal band of supporters. Over the weekend we have seen the first signs of what a Trump presidency will look like with his press secretary, Sean Spicer, attacking mainstream media outlets and falsely claiming that last week’s inauguration was “the largest audience to ever witness an inauguration – period”. His cabinet appointments – the least diverse and most elite selection in living memory – are also set to be approved later this week. For someone who claimed he would “Drain the Swamp” during the campaign, the hypocrisy of President Trump is already beginning to shine through.

Nonetheless, I felt that since he was democratically elected, his inauguration should be respected. The peaceful transition of power in a democratic society is a pillar of how that society functions. Indeed, those rioting in parts of the US on Friday by smashing shop windows and setting bins and cars alight should be condemned. The protests that took place on Saturday, however, were much different.

Women’s marches were held in over 670 cities around the world. The largest was in Washington DC with an estimated attendance of between 500,000 and one million people. The New York Times cited crowd-scientists who concluded that the attendance at this particular march was three times bigger than Friday’s inauguration. The march in Dublin – organised by groups such as Amnesty International Ireland and the Abortion Rights Campaign, and supported by the Union of Students in Ireland (USI) – saw thousands descend on the streets of the capital, while cities such as London and Boston saw crowds in excess of 100,000.

These worldwide marches were held as a show of solidarity against Trump’s rhetoric during the presidential campaign that demonised and threatened women and minority groups. Instead of attempting to delegitimize Trump’s election, however, the marches very pointedly made clear that now Trump is in the White House, they won’t sit idly by and watch women’s and minority rights be eroded. At a time when the political narrative is becoming increasingly sinister and divisive around the world, this show of solidarity across demographics and borders for the promotion of human rights is certainly encouraging.

The marches also promoted an increase in political engagement. The organisers of the main Washington march now plan to get American citizens to send floods of postcards to their representatives in Congress to fight Trump in the House of Representatives and the Senate and are encouraging women (and men) in other countries in which political tribalism has become commonplace to get more involved.

The large number of men present at these marches is also a positive sign. Now, more than ever, men must play an influential role in promoting the rights of women and refute Trump’s rhetoric that bragging about sexual assault can simply be cast aside as “locker room talk”.

The policy decisions President Trump makes and the tone in which he leads by will have repercussions not only in America but around the world. Although these marches most likely won’t make any difference to the new president or his administration, what they will do is change how the world reacts to him. Defiantly but peacefully, they have shown that engagement and not apathy is now the order of the day.