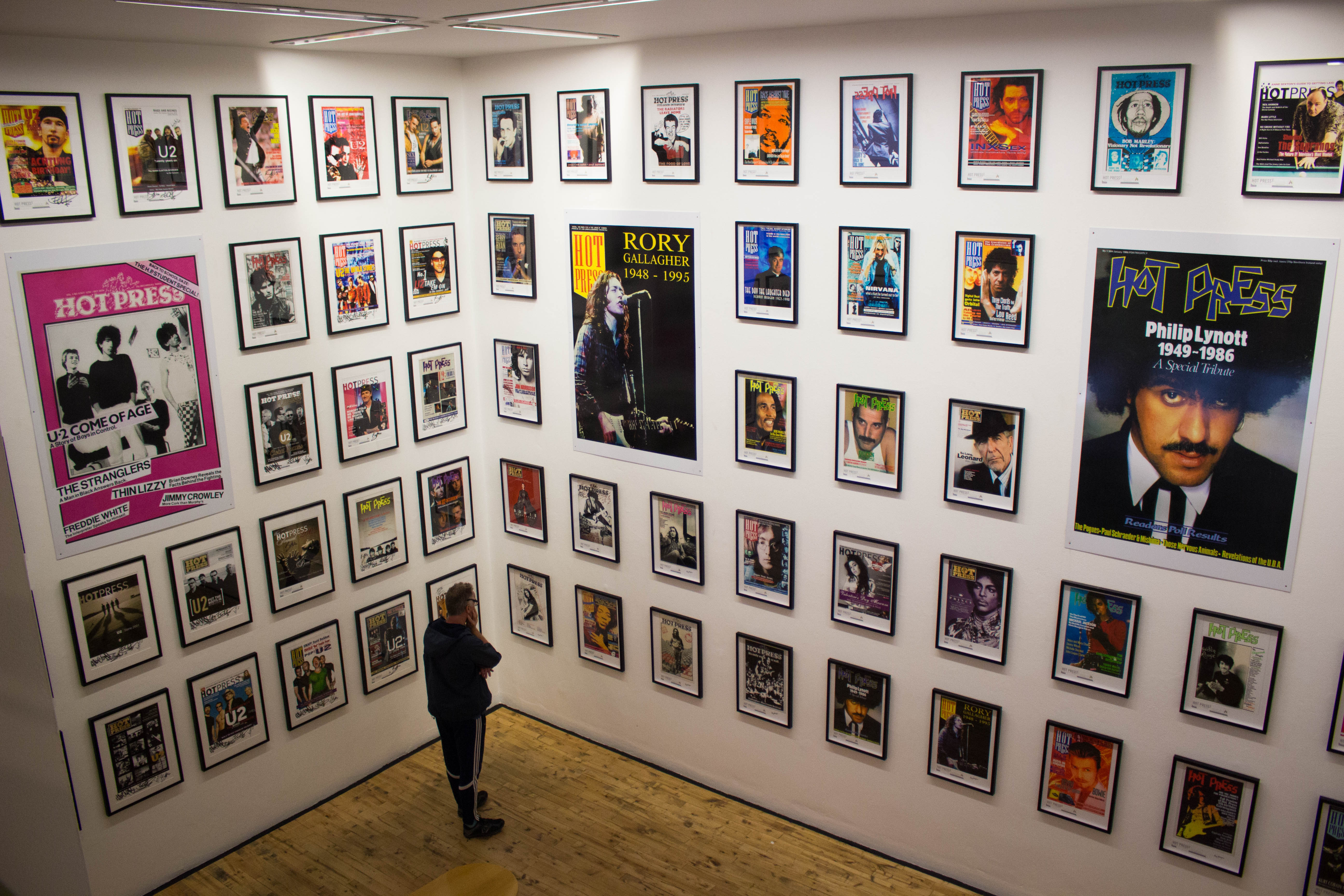 In the heart of Dublin’s most musical quarter, the Hot Press Covers Exhibition comes from Hot Press themselves to mark the 40th anniversary of the influential fortnightly music and politics magazine’s first issue. Located in the National Photographic Archive in Temple Bar’s Meeting House Square, the exhibition serves as a testament to the venerable pop-culture magazine with a display of their front covers throughout the years.

Curated in sections, the exhibition covers the various facets of Hot Press’s history. We learn of the story behind the publication’s conception in the 1970s, as Ireland established itself in the world music scene, and of various additions to the magazine over the years as it became the cultural force in Ireland. At each section, the ways in which the magazine developed is outlined through attached covers, helping to illustrate how the magazine shifted and changed to cover the world around it. The exhibition serves not just as a retrospective on Hot Press, but as a timeline of Ireland’s contemporary cultural growth, showing the newest acts and most influential people at the time of each printing.

From the first issue released in 1977, featuring a black and white photograph of Rory Gallagher ahead of his headlining set at the Macroom Festival, through to the present day, Hot Press has reported on many cultural and political touchstones. These stories can be seen in colourful chronology on the exhibition walls, with hundreds of magazine covers in high-quality gloss print.

Directly across from the front door of the exhibition is a room with high walls, bearing hundreds of Hot Press covers. On the opposite wall hangs arguably the most interesting collection of covers, dedicated to artists who have passed away. Phil Lynott, Rory Gallagher and Elvis Presley peer out from their frames, as do recently deceased musicians such as David Bowie and George Michael. Through a fascinating window into the past, we experience both the reaction to the deaths of music’s idols as well as the celebration of their lives in real time. The true value of publications like Hot Press is clearest on this wall: the staff of the magazine are music lovers and they encapsulate the reader’s thoughts and feelings like no other.

A map of Ireland details where cultural icons like Shane McGowan, Michael Fassbender and Rory Gallagher hail from, helping us witness the evolution of all aspects of Irish culture as Hot Press took the minutes.

As the name suggests, cover hangings make up the bulk of the exhibition. Monotony however is well avoided, with walls dedicated to artists like Van Morrison and Bjork, or a wall devoted to U2 in its entirety – Hot Press and U2 are shown to have a unique relationship, the magazine being one of the Dublin band’s earliest supporters – one cannot help but find themselves enthralled throughout. Upstairs come more covers, now signed by the depicted artists. Hozier and Imelda May feature, with more signed covers from the likes of Beck, REM and Robert Plant to be added as the exhibition is updated.

Information boards explaining Hot Press’s history tie each section together into a single narrative, ensuring the celebration of the magazine is not lost among the artists. While one comes away with new-found knowledge about some of the world’s greatest musicians, the show serves most importantly as a reminder of the role Hot Press played in a cultural reflection of Ireland over the past 40 years. From launching the careers of Irish bands, branching into other areas of Irish life like sports and politics and being a progressive voice on hot social topics like women’s rights and LGBT rights, the image of Ireland that Hot Press has painted throughout the years is a fascinating look into both the modern history of the country and the commendable and outspoken ways in which the publication presented it.

The Hot Press Covers Exhibition runs until the end of September and is free entry.