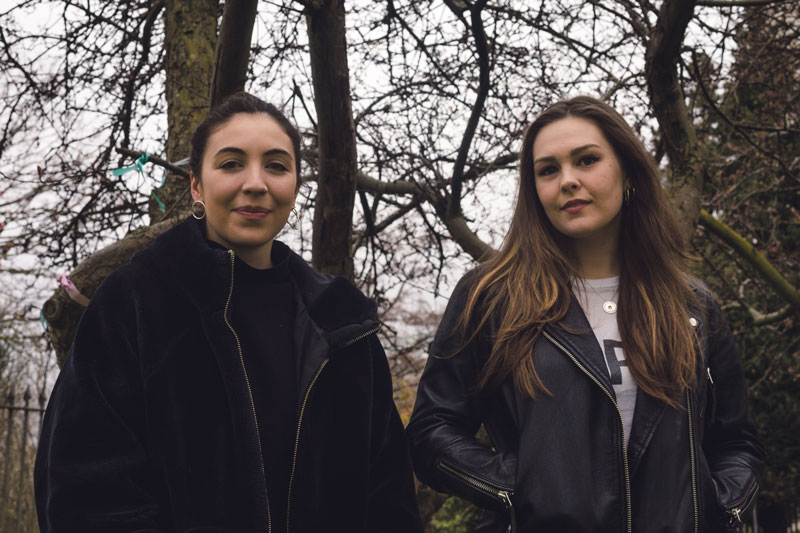 The two members of Saint Sister have been impressing audiences and critics for years.
Ivan Rakhmanin for The University Times

When an old classmate makes it big, it must be strange. You never quite get accustomed to seeing an old friend’s face in a magazine or hearing their voice on the radio. Sometimes you can pick them out early – it’s the person at the front of the class with all the answers. Other times, they surprise you with a talent you never knew existed until it brought them success.

Trinity has never fallen short of producing fearless, trailblazing graduates. Notable alumni of past centuries include Oscar Wilde and Edmund Burke. The 20th century produced Samuel Beckett and Mary Robinson, while in recent years, Ruth Negga and Jack Gleeson count Trinity as the place they first forged their careers.

Now, a crop of Trinity graduates are making names for themselves. Briony Somers, a history and politics graduate, was in third year when she created FRANC magazine with Lauren Henshaw as part of Trinity’s entrepreneurial accelerator programme LaunchBox. A fashion fanatic with an eye for detail, Somers managed to combine her two main interests to produce the fashion magazine.

Reflecting on how her time at Trinity set her up for the demanding and unruly nature of life beyond Front Arch, Somers said: “My time in college is a bulwark against the chaos of the ‘real world’.” While at Trinity, it was mentors and lecturers such as Ciarán Brady whose “rigorous originality”, Somers explained, inspired her to make her voice heard by asking the tough questions and adding an academic touch to the otherwise pop-culture dominated topic of fashion.

Somers’s achievements most certainly have not gone unnoticed and were undoubtedly well-earned. Having had to take time out of college following a series of bereavements and personal crises, Somers returned to Trinity to pioneer a project she hoped would push the boundaries of both fashion and academia. Somers’s journalistic achievements have carved out a space for her on Dublin’s cultural scene that stands as a reference point for many aspiring historians, writers and Vogue-lovers alike. With FRANC’s upcoming plans to head to New York and designs to launch a podcast next month, Somers shows no signs of staggering her rapidly accumulated momentum.

Oisín Fagan, an English and French graduate, has firmly established his reputation as a strong force in the literary world. His most recent book, a collection of short stories titled Hostages, has been subject to significant critical acclaim. Asking the young writer about his experience at College, Fagan wistfully spoke of his time at Trinity as he reflected on his journey since graduating. “Looking back, it strikes me as crazy that I was just allowed to read for four years. I still feel very lucky I was given that opportunity.”

Fagan said that the sheer number of texts he was exposed to over his four years at College informed the way he writes today and have been fundamental to his success. Alongside reading, Fagan explained how the undemanding hours of his course allowed him to develop his predilection for writing, fostering the interest and honing his skills and ideas. His advice to any aspiring writers today is to “write, write and write”. Fagan values the abundance of inter-lecture hours spent developing and articulating his ideas, and he encourages similarly ambitious, creative students to do the same. “You will have to be an apprentice for a long time, writing hundreds of pages before you find what you want to say, so don’t let yourself be discouraged at the start.”

Claire O’Reilly, a blossoming theatre director, echoed Fagan’s advice to persist in the face of discouragement as she mused over her first year being out of college. Presented with the ever-daunting prospect of forging a successful career for herself in the world of theatre, O’Reilly reflected on those first few months when she found herself deprived of the safety and security of Players’ Theatre. “We all know that College is a bubble and when the bubble bursts you are suddenly out there and it’s a bit scary. If you feel a bit of a drought in creativity that is so normal.” O’Reilly, an active member of Players as an undergraduate and a passionate drama and film student, remains grateful for the influential foundation that Trinity has provided her with for her career. 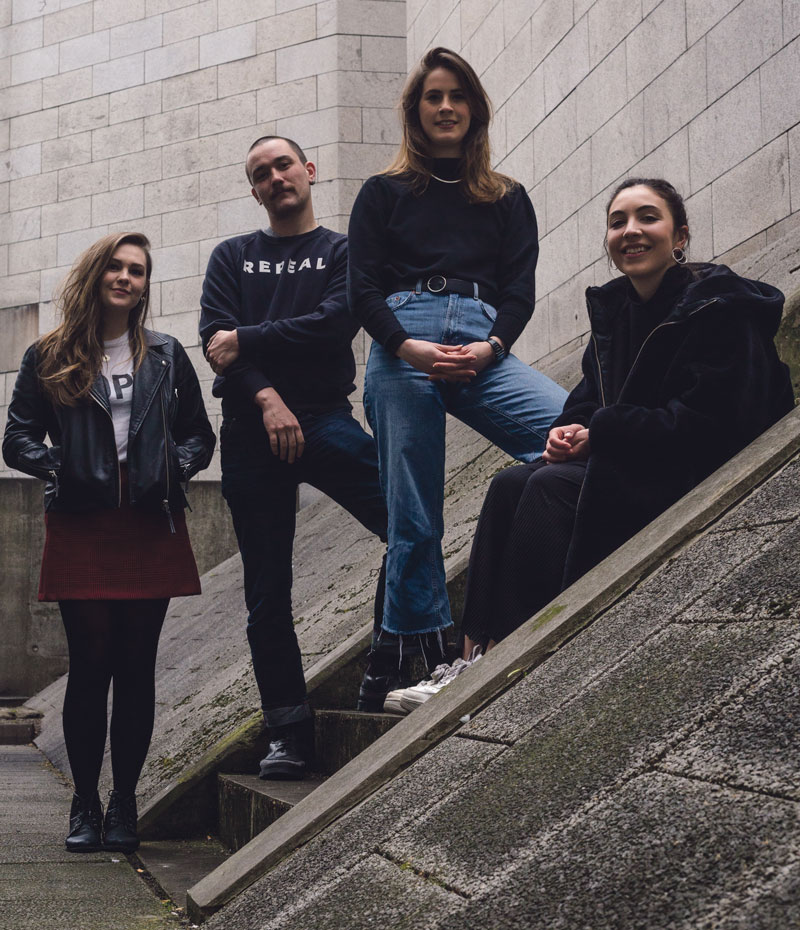 “You will have to be an apprentice for a long time.”

Not only did her course allow her time spent acting and directing with Players, it gave her the opportunity to develop connections with the people she met while studying here. In fact, O’Reilly joined forces with a group of her fellow Trinity graduates, including Dylan Coburn Gray, to set up the Malaprop Theatre company – its meteoric rise to success has been noted by critics at both the British Theatre Guide and the Irish Times.

Indeed, Dylan Coburn Gray, having studied music at college, has somehow found himself alongside O’Reilly at Malaprop, staking out his territory as an innovative and daring playwright. As a music student who admittedly wasn’t enthused over the prospect of joining any society such as Players, Coburn Gray has had quite a singular experience when viewed alongside those of his Malaprop colleagues. Pondering how his time at Trinity influenced his journey to becoming a flourishing writer, Coburn Gray concluded: “I just felt my undergrad was this amazing gift where it was just four years where my job was to be interested in anything and everything.”

Coburn Gray remarked upon the tremendous pressure on writers today to “be interesting”, but implored aspiring playwrights and theatre fanatics to “be interested”. Coburn Gray credits much of his success to simply “being awake”, to keeping his eyes and ears open and using his creativity as a medium to articulate universal problems, feelings and experiences.

Addressing the oddity of his path from school to college and then career, Coburn Gray laughed as he explained: “I was never a good musicologist but being a not-very-good musicologist made me a much better writer.” By taking the best of what he could from his course, by observing, maybe even eavesdropping and definitely cultivating his talent and interest in theatre, Coburn Gray garnered a varied experience that continues to inform the content of his writing today.

Gemma Doherty of Saint Sister, a fellow classmate of Coburn Gray, similarly concluded that her course “undoubtedly shaped the way I write and think about music, for better or for worse”. Doherty, a music student, and Morgan MacIntyre, who studied history and politics, met having just graduated from Trinity. Similar to O’Reilly, Doherty reflected on this period as a “strange” time in her life, and one which she felt “completely unprepared for”.

However, once the two newly graduated and enthusiastic musicians found each other, MacIntyre explained how they both understood “that we had something to offer the other and that making music, doing what we love, would be easier together”. Four years later, the pair are preparing for the release of their debut album at the end of this year, coming off the back of the whirlwind success of their EP, Madrid. Named by readers of the Irish Times as the “Best Irish Band” in 2016, the duo’s future career is undeniably and excitingly promising.

Nevertheless, the pair are still modest about their achievements: “We’re just very aware of all the work that we have still to do. It’ll be a long time yet before we look back at college from any successful ledge.” With a performance at the National Concert Hall and a tour with Lisa Hannigan now also under their belt, it’s hard to think it will be all too long before the duo will comfortably bask in the glory of their achievements.

Just as Doherty and MacIntyre wished to wave off any mention of success in relation to their career, their fellow leading lights responded similarly. Having spoken to each of these groundbreaking graduates, each played down their success so far.

For Fagan, “I really don’t feel successful. I feel very lucky that there have been a few people who have liked me enough to publish me.” And maybe this is exactly what the key to success is: an absorption in your work and a passion that prevents you from not working.

Coburn Gray simply laughed as he contemplated his journey from college to today. “I just think people take me a lot more seriously than they did him”, he concluded. Or, as O’Reilly put it: “I don’t feel like I’ve ‘made it’ necessarily”. The pair both have big plans ahead with their company embarking on a new endeavour into the film and TV industry.

Both Malaprop members were eager to give advice to those looking to follow their footsteps. Contending that Trinity has produced many of the most active people in the theatre industry at the moment, O’Reilly explained that she herself inevitably followed the path laid down by so many before her, “there were always people from Trinity just a level ahead of me, or 10 years ahead of me, or 20 years ahead of me—there was a clear trajectory that could be followed.”

O’Reilly has not only followed but confidently pursued this path, and firmly encourages others to do the same. Meanwhile, Coburn Gray offered indispensable advice to aspiring playwrights as he spoke of his once habitual inclination to second-guess himself and his ideas as he started out on his writing career: “What I am saying is the artistic equivalent of ‘be yourself’. Insist on the validity of your point of view.”

This idea resonated in Briony Somers’ advice to students looking to pursue ambitious and creative cultural plans: “Trust yourself”, Somers asserted, “and have people in your life who aid that and do it for something outside yourself”.

Within a few years of leaving Trinity, these graduates have already installed themselves as ones to watch. Remember their names – they’re likely to become increasingly familiar in the years to come.