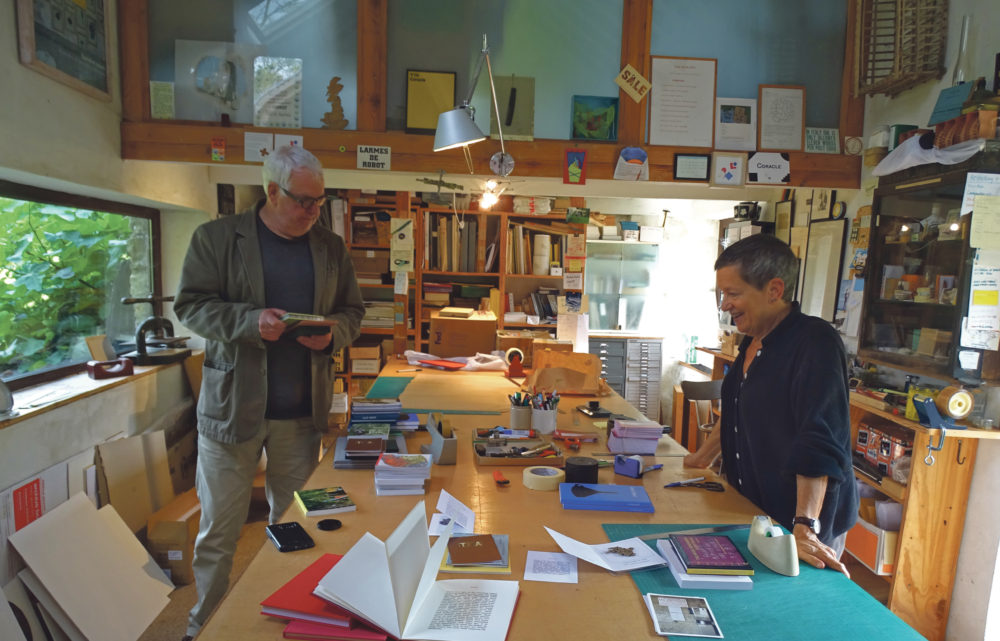 In Rural Tipperary, a Printing Press Led by Curiosity, not Cost

In the hills of Tipperary, Simon Cutts and Erica Van Horn challenge artistic conventions with their Coracle printing press.

To the naked eye, Erica Van Horn doesn’t seem like an outsider. The US-born artist and writer, who runs a small printing press called Coracle with her British husband Simon Cutts, appears to fit perfectly into her home in the hills of Co Tipperary. And, having lived in Ireland for more than 20 years, she has a fair claim to the title of local by now.

In her online journal, Some Words for Living Locally, which was published as a book in 2014, Van Horn writes that “a blow-in can be someone from 3,000 miles away or it can be someone from the next village”. For her, the term “is not exactly negative but there is the implication that this person will not stay and will most likely blow out again”.

Van Horn and Cutts, though, don’t show any sign of blowing anywhere. Their house is built on a hill, tucked in behind the large farmhouse of their neighbours. The remoteness of their home is accentuated by the grass that lines the middle of the road leading up to it. It’s from here that they operate the small-scale Coracle Press, established by Cutts in 1975.

But if the couple have made Tipperary their home, they very much see themselves as outsiders. This, Van Horn says, allows them to maintain their roles as impartial observers of the community they live in. Whether or not Van Horn is a blow-in, she works with the impartiality of one. She’s not desensitised to her surroundings, and not bound by the anxieties of trying to conform to local conventions. She detects the strange customs and habits of those around her that might go unnoticed by the average community member. “There’s something for me very stimulating about being here”, she says. “We just spent a few weeks in England, and within half an hour of being back here, I always have something that I have to note down. It’s still fresh and new for me.”

I can’t stop being American. I am always going to be where I came from, so that for me is a very interesting point

Fresh and new is one thing, but being an outsider also allows Van Horn to work free from the literary tropes that often burden Irish writers. “Every time you read an Irish person writing about Ireland”, she says, “they are giving everybody what they know. They’re giving it back. And sometimes, someone like Edna O’Brien, she’s giving an uncomfortable truth of that time. On the whole, I find even American writers who have an Irish background and come to Ireland find what they expect to find”.

When Van Horn came to Ireland, she says, “I didn’t know what I was coming to – so I just found what I found”. Her work has no agenda, no predestined audience and no desire to place itself within the Irish literary canon. “I can’t stop being American”, she says. “I am always going to be where I came from, so that for me is a very interesting point.”

Aside from nationhood, however, Van Horn can’t remain an impartial observer, because it’s her who must decide what is included or excluded from her journal. As she sifts through her day to focus on one event, person or turn of phrase, quiet humour creeps into her work. Often, she says, what she notes are absurd comments or the odd customs of the people she meets.

Van Horn’s curiosity doesn’t end with people: she’s also drawn to objects, like the farmyard tools she found when the pair were renovating their home. These objects have been claimed by Van Horn and now hang on the outer wall of the building in which she writes. She has drawn their silhouettes, and they surround her notes in Living Locally. 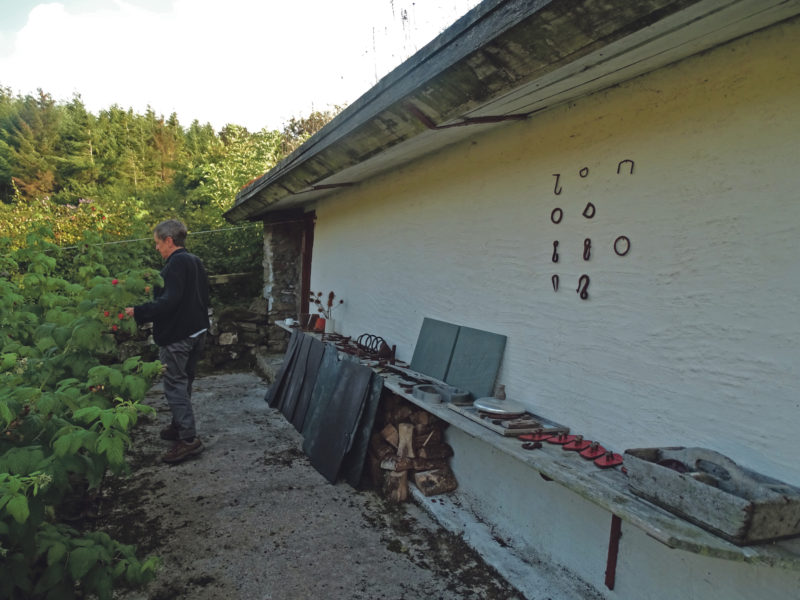 Tucked in behind the large farmhouse of their neighbours, Coracle is hidden away in the hills.
Martha Kirwan for The University Times

Cutts says the drawings are “like little tailpieces in an encyclopaedia”, and Van Horn says it’s these types of everyday objects that give her inspiration, not monuments or objects of grandeur: “I go to a wonderful museum or a wonderful church and I have absolutely no desire to draw anything, and then I’ll come back. I am interested in the things that are physically close to me, and when I look at huge grand things, they’re nice and I love looking, but I don’t feel that intimacy.” Inside the couple’s library hang walking sticks found in their barn. Van Horn says that it was their shape and silhouette that caught her attention rather than any notion of sentimentality: “I wasn’t trying to be nostalgic. It’s about reclaiming them – but on my terms.”

It seems Coracle does everything on its own terms, including the attention that Van Horn and Cutts pay to the physicality of the books they publish. Living Locally, with its beautiful cover and Van Horn’s drawings, is one instance of this, but it’s an ethos that she says extends to the publication of every book produced by Coracle. For Cutts, “the material book for Coracle is the work in a way. It’s almost like sculpture. Its characteristics are all physical. The presence of the book is almost like a platonic thing on the table, in a room”.

In some cases, the materiality of the book is everything. Van Horn shows me a book called Cuckoo that was created by Yoko Terauchi, and published by Coracle in 1992: it opens out to form what looks more like a sculpture than a book. Van Horn says it forces us to reassess what a book can be: “Is that a book or is it a sculpture, or is it an instillation? If she were to do this as an artist in a physical space, it would be the room.”

Books like Cuckoo are what make Coracle an important, even vital, entity within the publishing world. Unlike major publishing houses, where literary prizes and bestsellers are often the focus, Coracle leads with curiosity. If the book is not intellectually or creatively stimulating, then it will not be published. Coracle is also not regimental about the type of work it publishes. Cutts suggests that they have “no category”. The bright, sun-lit room in which they store their books is filled with an array of artist’s books, postcards, pamphlets, invitations and other books that are difficult to define. Their diversity ensures that the increasingly devalued art of writing does not become stagnant or stifled.

We have books on the Coracle backlist that, if you could find one, are worth thousands of dollars to buy now

If Coracle seems almost impossibly niche, hidden away in rural Tipperary, it has still managed to capture attention. Trinity’s Dr Julie Bates, who lectures in the College’s School of English, says Coracle operates by its own self-established mandates: “Coracle has been quietly expanding the possibilities of publishing in Ireland for decades”, she says. “They produce beautiful books, cards and ephemera that play with their material qualities as objects in their own right rather than neutral containers for words. The attractions of this aesthetic refinement and conceptual play are immediately obvious when you hold a Coracle book in your hands.”

But Bates says that for her, “a huge part of the appeal of Coracle is their marginal and contrarian disposition. Working in rural Tipperary, in collaboration with a network of fellow poets and artists and editors, based for the most part outside Ireland, who are similarly interested in questioning the potential of publishing, they deliberately operate outside the institutional and commercial mainstream”.

Back in Tipperary, Van Horn and Cutts work away in a cluster of beautiful buildings – Van Horn calls it their “little shanty town” – that took years to cultivate. It’s an interesting backstory. During a trip to Ireland following two residencies at the Irish Museum of Modern Art, Van Horn and Cutts were walking in Tipperary when “it started raining, so we started hitching. We were somewhere between Clonmel and Fethard and this guy picked us up. We told him that we were kind of looking for a place but not really. I was sitting in the front and there was rubbish up to my knees and this guy said, ‘I have this bungalow I want to sell’. Simon was punching the back of my seat saying ‘we don’t want to look at this bungalow’. The road was completely overgrown and this place was a total tip. It was really dark and they had a fire going on an August day as it was freezing cold inside, and the windows were falling out. And then Simon said, ‘right, we’ll buy it’. We worked on it for about seven years”. 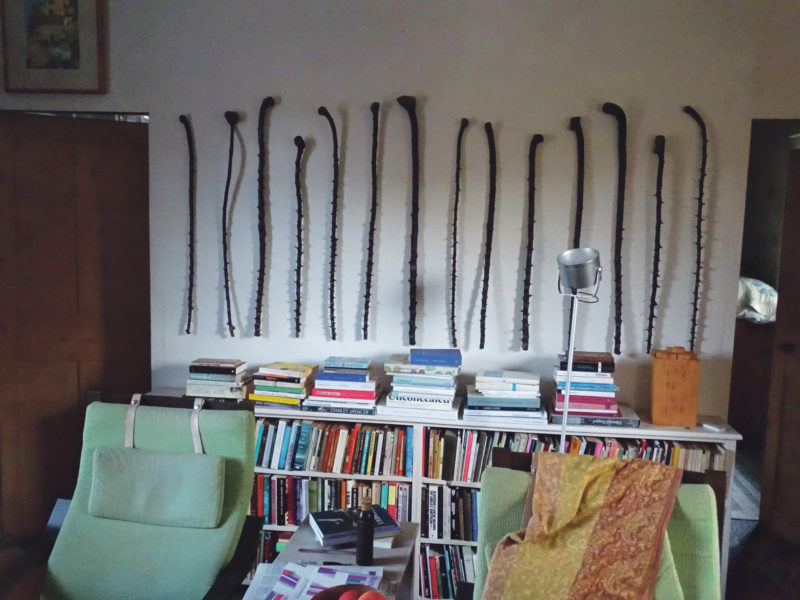 Walking sticks, originally found in their barn, hang in the couple’s library.
Martha Kirwan for The University Times

The hard work has paid off: the house is now created in their image. The walls of the bathroom display a poem by Cutts, which Van Horn says makes it into a makeshift page and extends the idea of the book further than its truncated format would normally allow. It also catapulted Cutts onto the contemporary art scene, which he says was “a good economic solution, because there is never any money in this small press publishing, but there is in art. Visual art is expensive. Publishing works on a different strategy. It’s much more long-term”.

But for Van Horn and Cutts, money is certainly not the objective – it can’t be. Small presses are not often a lucrative business so to establish one is to devote oneself to the act of publishing good work, even if it does not sell. Often, their books do not get any significant attention until they have been on the market for a number of years. “It’s a long-term strategy”, Cutts says. “You work from your backlist. We have books on the Coracle backlist that, if you could find one, are worth thousands of dollars to buy now. But we never have any of those. It’s the dealers that are moving the prices around.”

“A new book might do nothing for five years”, Cutts says. “If it’s a book of poetry, for instance, we might do 300 copies, 500 if it’s an exceptional idea and that will last us maybe six or seven years.” Despite the unreliability of their work, Van Horn and Cutts are confident in their knowledge of what is a beautiful piece of art and what is an important book of writing.

Van Horn and Cutts have never been afraid to produce unconventional work – even in the early days of Coracle. “I went back to my infant school”, Cutts says, “and I had done this book about the calendar of the year, and the birds coming out, the first flowers and the swifts coming in, and all this stuff. And I re-edited some childhood work as one of my first books, which was called A Child’s Backend of the Year. This whole process of re-editing is what I tend to do. I tend to re-edit other people’s work. I am interested in the idea of editorial as a process and reduction through editorial”.

Since its establishment, Coracle has undercut the agendas and directories by which major publishers operate. Cutts says Coracle is “much more about collaboration and dialogue than it is about submission, prizes, all that kind of shit that the world seems to run on now”. Its mission is not money or elitism – instead, the sincere interest in art and writing of Van Horn and Cutts is the driving force behind a small press that continues to push the boundaries of publishing from its secluded world in Tipperary.