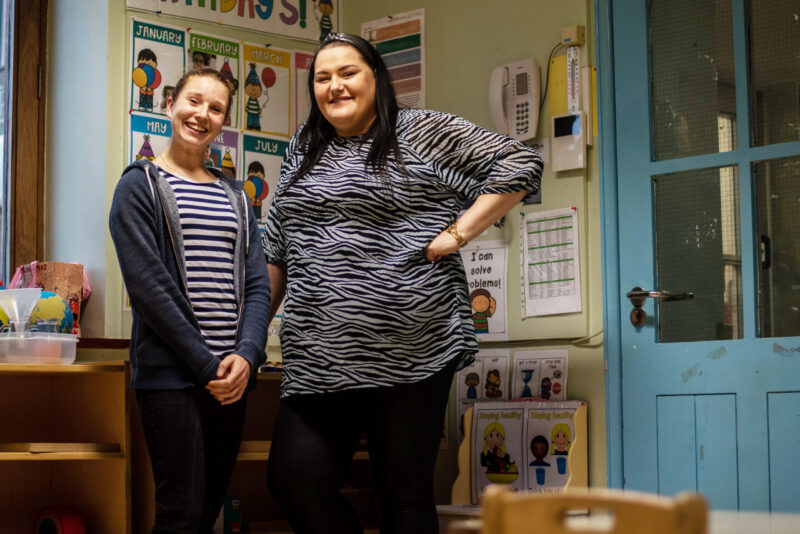 “Why is it that parenting appears to be in such a seething antithesis to the participation in higher education?”, she asks me. “Furthermore, how can we create a more inclusive university?”

Student and staff parents across the country are asking the same questions. A PhD researcher on the GEOFIN project at Trinity, Benceković is one of many student parents in Ireland who continues to face restricted access to higher education – excluded because they have to look after their children while juggling their studies. While there are no official figures available on the number of third-level students with children in Ireland, there does appear to be a growing number of “non-traditional” students, like Benceković, in our colleges.

While some students struggle to make 9am lectures because they spent the previous night drinking vodka and cokes in O’Reilly’s, student parents face a strikingly different – and less glamorous – situation: they are more likely to miss research and class time due to “unforeseen plights, such as teething, fever, or anything else that makes a baby stick to [you] for the rest of the day”, Benceković says.

Indeed, with this growth in student parent numbers comes the need for growth in inclusivity in our colleges, where the responsibilities and priorities of student and staff parents that differ from the rest of students are accommodated for. Looking after a teething child while juggling assignments and exams is nearly impossible – this is where colleges need to step in and provide assistance.

The reaction of the higher education sector to this imperative has been mixed. Colleges across Ireland have responded to student parents’ needs by providing on-site creches such as University College Cork’s Creche Cois Laoi and NUI Galway’s Spraoi, not to mention Trinity’s day nursery, which last December celebrated its 50th anniversary, making it the oldest on-site workplace creche in Ireland.

Meanwhile, some higher education institutes have opted to support parents financially. Technological University Dublin has a childcare support fund that provides financial support of €2,200 to parents who are full-time students with children in a creche or registered childminder. Mary Immaculate College (Mary I) in Limerick has Ireland’s only dedicated student–parent support service, providing students with access to emotional and practical support in the form of one-to-one appointments, weekly networking spaces and workshops.

While Mary I arguably leads the way in student–parent support services in the country, Trinity is not far off. In 2013, College released its Policy on Supports for Student Parents, Student Carers and Students Experiencing Pregnancy. The policy’s introduction says: “At the heart of all the College’s activities is our commitment to the intellectual and personal development of our students … to this end College is committed to creating and sustaining equality of opportunity for an increasingly diverse student population.”

Among its support for parents, the policy highlights Trinity’s day nursery and creche, its breastfeeding facilities and the Trinity La Leche League breastfeeding group. Led by Elizabeth McCarthy Quinn, this meets every fortnight in the Pavilion Bar. It also contains guidelines on accommodation that student parents can avail of at university and at home, including family-friendly timetables and facilities for students with young children.

Clodagh Brook, an associate professor of Italian and the College’s associate vice-provost for equality, diversity and inclusion, says the policy is an important part of Trinity’s commitment to equality and diversity among its students: “The university believes that caring responsibilities should not stand in the way of a student’s ability to complete their studies, and is committed to being as flexible and reasonable as possible when it comes to accommodating such students and their commitments outside Trinity, while still maintaining academic standards.”

But while the policy is undoubtedly a positive measure that shows that Trinity is committing itself towards addressing student and staff parents’ unique circumstances, it is not without its faults. Benceković argues that while it does exist, “so few people knew about it, let alone about how to implement it”. She says: “With the policy, Trinity is clearly taking a moral stance, but it doesn’t feel like much research has been made in it, or sound like student parents were asked about their thoughts or experiences.” 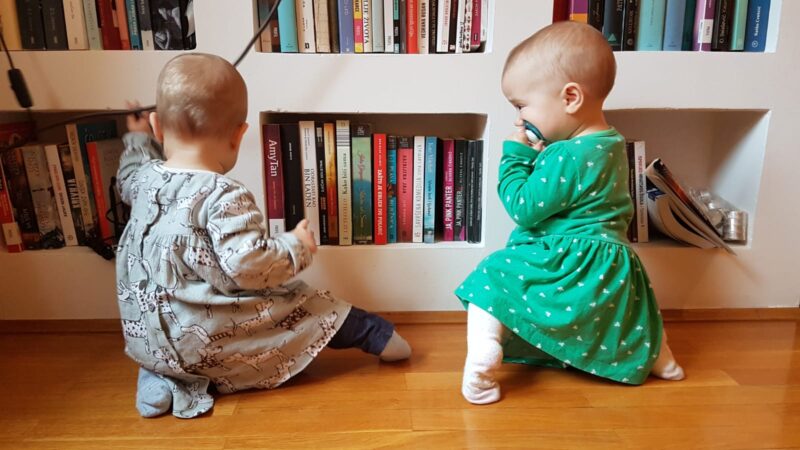 Sara Benceković is a self-professed “PhD mum”. She gave permission to use this photo of her children.

A clear example of this is Trinity’s breastfeeding facilities.

Despite College’s long-held status as a breastfeeding-friendly campus, only three breastfeeding rooms actually exist – in Trinity’s Biomedical Sciences Institute, D’Olier St and in the day nursery. Brook says that there are “two more under development”, but this comes nine months after Tony McMahon, Trinity’s director of diversity and inclusion, first publicly announced the introduction of a new breastfeeding pod in the Arts Block, and a total of four years after the spaces were first mooted. Since then, the breastfeeding spaces have still yet to be introduced. In fact, McMahon admits that there was no exact timeline for the breastfeeding pod implementation, with issues as to location and price meaning it “may take some time”. In the meantime, mothers are left with few designated spaces to breastfeed – just another irritating impediment to education for people who already have a lot on their plates.

While this is certainly a poor reflection on Trinity’s commitment to accommodating the needs of student parents on campus, the day nursery is a sparkling example of where the policy has succeeded. The creche, set up in 1969, currently cares for up to 52 children between the ages of three months and five years old and is safely tucked away, opposite the hustle and bustle of College Park and around the corner from the Business School, in a quiet oasis perfect for kids to play in and feel safe from the busyness of Trinity.

During a recent visit to the facility, I met with Aoife Cox, the full-time manager of Trinity’s day nursery, and two of her staff, Lina Deegan and Jennifer Brennan, both of whom have their children in the nursery. This, they tell me, is unusual for most on-site childcare facilities, and reflective of the nursery’s ethos of providing “a home away from home for the children”.

With the policy, Trinity is clearly taking a moral stance, but it doesn’t feel like much research has been made in it, or sound like student parents were asked about it

Cox stresses the strategic importance of the day nursery for the College, especially in supporting women in accessing education and continuing working in their areas of expertise. She says: “One of the biggest barriers for tackling gender imbalance is access to high-quality affordable childcare. By providing 50 years of childcare to the Trinity College community we were ahead of the pack in supporting not only women’s access to education and employment but also in supporting the whole family unit.” If a parent has nowhere to leave their child when they need to be writing an essay in the library, higher education becomes extremely impractical.

While college is expensive for the vast majority of students with fees, rent prices and public transport costs increasing each year, it is even more costly for student parents. The Higher Education Authority reported that in 2017, childcare – after rent, utilities and transport – was the fourth-largest category of expenditure for the Student Assistance Fund, an emergency source of funding available to colleges.

Ireland is currently facing a “childcare crisis”. Frances Byrne, the director of policy and advocacy with Early Childhood Ireland, the leading membership organisation in the early years sector in Ireland, says in an email: “The early years sector in Ireland is at a tipping point.” Irish parents are not being given the vital supports they need to thrive in society – never mind in university.

Commenting on Ireland’s investment of approximately 0.2 per cent of GDP in the early years (the lowest amount of any country in the OECD, where average investment is 0.8 per cent GDP) she says such low funding is “at the root of issues with affordability and sustainability in the sector in Ireland”, where ultimately, “the knock-on effect of this under-investment is that parents, providers and staff are left to pick up the pieces”. The extra money that should be coming from the government’s coffers ends up coming out of the pockets of cash-strapped parents.

The knock-on effect of this under-investment is that parents, providers and staff are left to pick up the pieces

Fortunately, Cox says the additional support the nursery receives from Trinity has helped buffer the service from some of the wider issues across the childcare sector. However, with fees set at €223 euro per week for staff and €145 for students, this means that the cost of childcare for staff is still a considerable sum of €10,927 per year for staff and €6,670 per year for students. To remedy this, Cox says: “As a service provider, we are conscious that costs of childcare can be the difference between a person starting college and graduating or dropping out due to financial pressures and so we have signed up to various childcare subsidies schemes to help further reduce the financial burden on parents. These include the Early Childhood Care and Education, Community Childcare Scheme and the new National Childcare Scheme.”

According to Cox, these programmes have had a massive impact on the service users, and in particular, students. Because it is based on the social welfare benefits received by the parent, the Community Childcare Scheme can cover up to €145 per week for 52 weeks of the year, meaning that some student parents pay nothing for childcare.

While there is no denying that Trinity’s day nursery provides a vital service for student and staff parents in college, that is not to say that Trinity as a whole is one big playground. Commenting on the inaccessibility of some of its other services besides the shortage of breastfeeding facilities, Benceković says she has never used the nursing rooms on campus as they are quite far removed from any university building she uses. Carrying a hungry baby to a faraway building is usually not feasible. Benceković goes as far as to argue that these sorts of problems make children invisible on campus, and ultimately, make Trinity a child-unfriendly space.

Indeed, despite being seven years into the Policy on Supports for Student Parents, Student Carers and Students Experiencing Pregnancy, Trinity’s follow-through on basic parent support services still seems wobbly. Although the day nursery and La Leche League breastfeeding group provide strong examples of Trinity committing itself to addressing student and staff parents’ unique circumstances by setting up infrastructures of care, and while the introduction of schemes such as the National Childcare Scheme will go a long way in reducing childcare costs, greater strides need to be taken by Trinity and indeed all institutions of higher education and learning if they want to suit the needs of the entire college community.