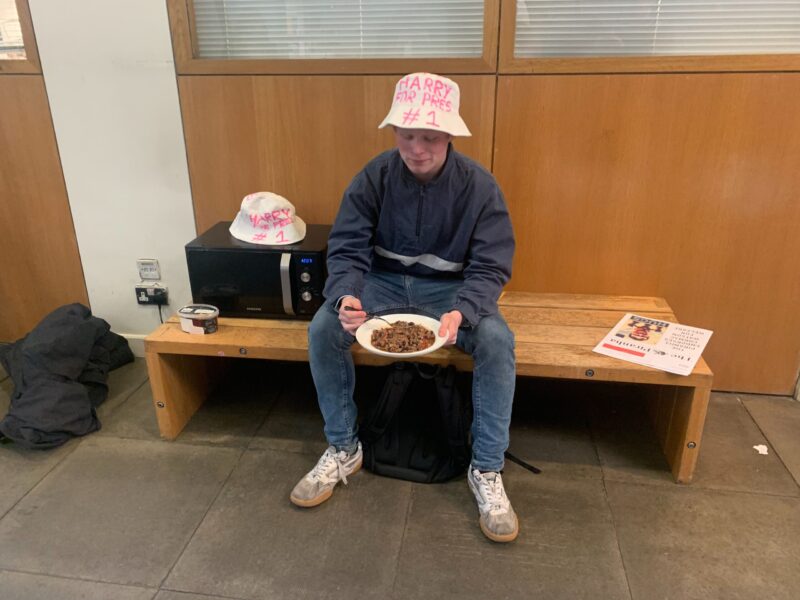 Williams tucked into a "a nice mild chili con carne", which he heated in a microwave he brought himself.
Emer Moreau for The University Times

Harry Williams, one of the three presidential candidates in this year’s Trinity College Dublin Students’ Union (TCDSU) elections, carried a microwave into the Hamilton building this afternoon to highlight his pledge to lobby for more microwaves for students in the building.

Williams is running on a platform of bringing the union’s focus back to the needs of students and moving away from involvement in national politics. He is also advocating for a referendum that could take TCDSU out of the Union of Students in Ireland (USI).

Williams enjoyed a portion of chili con carne while surrounded by his campaign team. Livestreaming the stunt on Instagram, Williams took the opportunity to talk about problems within the Hamilton Building.

Speaking to The University Times, Williams said: “I’ve just enjoyed a nice warm lunch in the Hamilton, [and] showed how easy it is to bring a microwave into the Hamilton.”

“I think the Hamilton is somewhere that gets forgotten about by the students’ union”, he continued. “Why aren’t there microwaves in the Hamilton?”

“I’ve just enjoyed a nice mild chili con carne, and I think other students should be able to do the same. And if I’m elected, that’s what I’ll do. I will get things done, instead of talking about things.”

Williams said that by leaving USI – one of the more controversial points of his manifesto – the union would have more money to purchase microwaves for students. 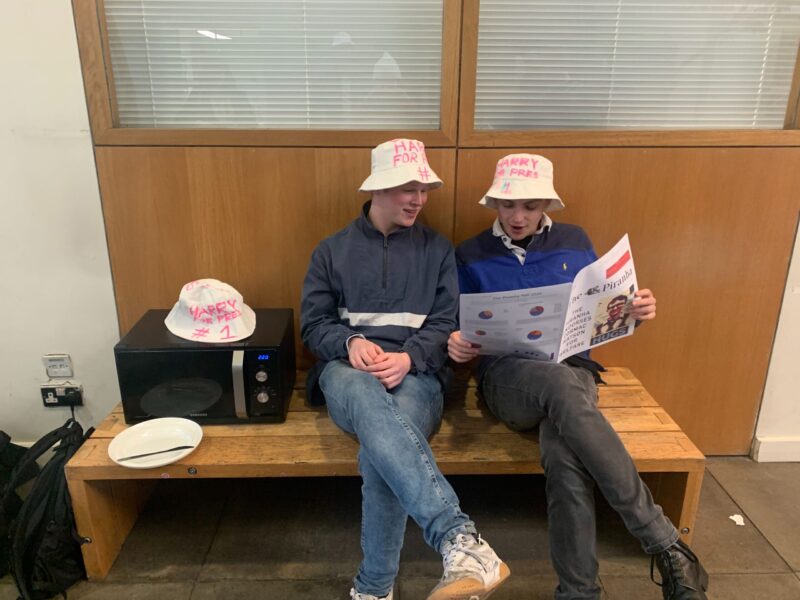 Williams perused the Piranha while enjoying his lunch.

Gesturing to his copy of the Piranha, he said: “You can have a nice warm lunch, read the paper and enjoy yourself and take a break from a long, heavy day.”

As the campaign enters its final days, Williams will be trying to build campaign support across campus – targeting one of the most often cited issues for Hamilton students – access to microwaves.

Williams’s counterpart Eoin Hand has also made sourcing microwaves for the Hamilton a core part of his campaign. He launched his own stunt today, carrying a microwave of his own around the campus.

The 10 TCDSU candidates will tonight take part in the last hustings of this year’s campaign, which will take place in Halls. They’ll be hoping to ram home their manifestos to first-year students in attendance.

For Williams, the pressure is on – polling conducted by The University Times, published today, puts him in last place. Some 20.1 per cent of students indicated they would give him their first preference when voting starts tonight.