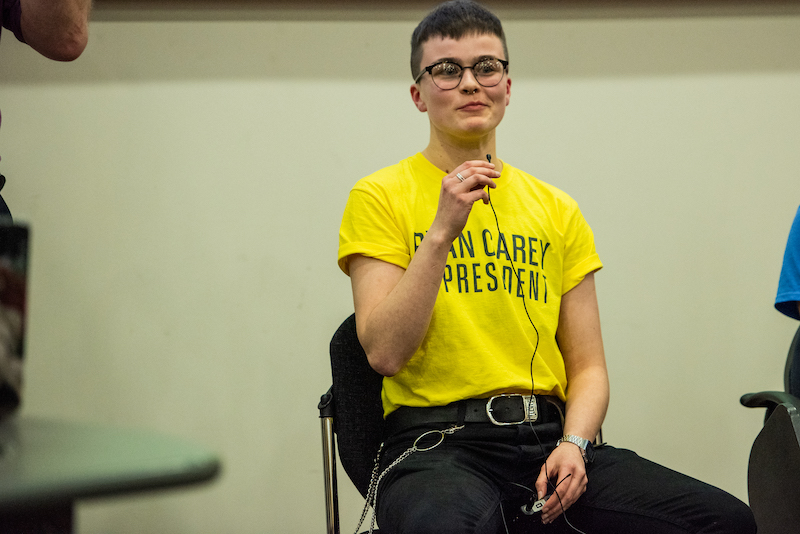 Carey’s campaign team is forbidden from canvassing for one hour tomorrow, from 10am to 11am, as a sanction.

Campaign teams are permitted to move their lunch hour from between 1pm and 2pm to another time, but if any canvassing takes place in St James’s Hospital or Tallaght Hospital, on-canvas canvassing must stop for two hours instead of one.

Speaking to The University Times, Carey said he and his team “didn’t realise” they were required to take a two-hour break from canvassing on campus, “because it wasn’t made clear at the candidate briefing”.

Carey, the current TCDSU gender equality officer, is emerging as the most orthodox of the three presidential candidates. His counterparts, Harry Williams and Eoin Hand, have no TCDSU background in comparison. Speaking on Trinity FM today, though, Carey admitted that the union is suffering from a “lack of change”.

Carey said he can relate to students who feel disengaged from the union, as he was not involved himself for his first two years of college. “I’ve really tried not just to be the ‘SU candidate’”, he said, before arguing he has worked to make his manifesto inclusive: “When I was writing my manifesto, I spent a lot of time talking to students who felt outside the union. I’ve really tried to be proactive.”

He also criticised this year’s sabbatical officers for not engaging enough with part-time officers, in a pitch that hinted he’s beginning to move away from emphasising his own role in TCDSU.

Carey was more willing to acknowledge the union’s problems today than at Tuesday night’s Council and Equality Hustings, arguing that previous presidents have spent too much time on campaigns to focus on “passion projects” rather than the issues that matter most to students.

Yesterday, Megan O’Connor, the sole candidate for education officer, received a two-hour ban from canvassing on social media, after it emerged that a student who was not a member of her team posted in a Facebook group wishing her luck.