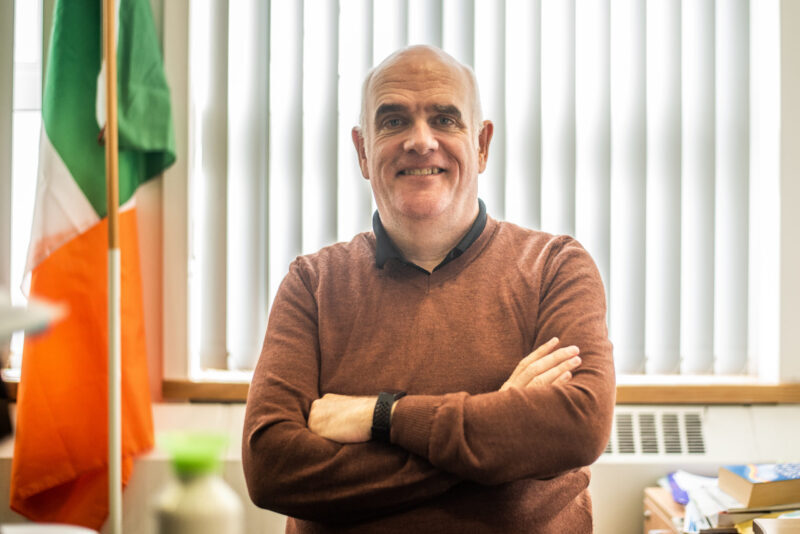 Language is a powerful tool for expression. All languages have the same purpose – to communicate thoughts – and every language has a unique way of allowing us to express ourselves.

Sign language is one of these modes of expression.

Today, with coronavirus and health warnings rapidly spreading across the globe, we are being forced to consciously think about and reassess how we use our hands in our everyday lives – whether through communication such as hand-shaking, or through general hygiene like hand washing. For many of us who don’t “sign”, this may be a new experience.

Much of how we communicate is purely subconscious, particularly when it comes to body language and gesture. From the friendly handshake to the enthusiastic high-five, there are many simple and effective ways of sending messages to one another without the need for vocalisation.

According to most recent figures, there are over 7,117 languages spoken in the world, with the number of languages – and the languages themselves – in a constant state of flux. Language, a living and dynamic mode of communication, is shaped by the different communities that interact with it.

If a child was caught signing, they would be punished – I would have been punished for it

And while words are generally the first thing that spring to mind when we think of language, it’s accents and pronunciation – the sound of language – that give languages a unique ring, helping us to distinguish Spanish from Portuguese when our junior certificate Spanish fails us.

But this isn’t always the case. After all, not everyone speaks the same language. For members of the deaf community, this fact speaks volumes.

But while the Deaf community considers itself a “linguistic minority whose language is a valid tool for expression of equal standing to spoken languages” according to Dr Lorraine Leeson, Trinity’s associate dean of research and professor in deaf studies, Ireland – particularly in its education system – has only until recently begun to recognise the language’s validity.

After a decade of campaigning and lobbying by the Irish Deaf Society and other organisations, Trinity’s Centre for Deaf Studies was finally established in 2001. Now in its 18th year, it provides the only bachelor degree of its kind in the country. 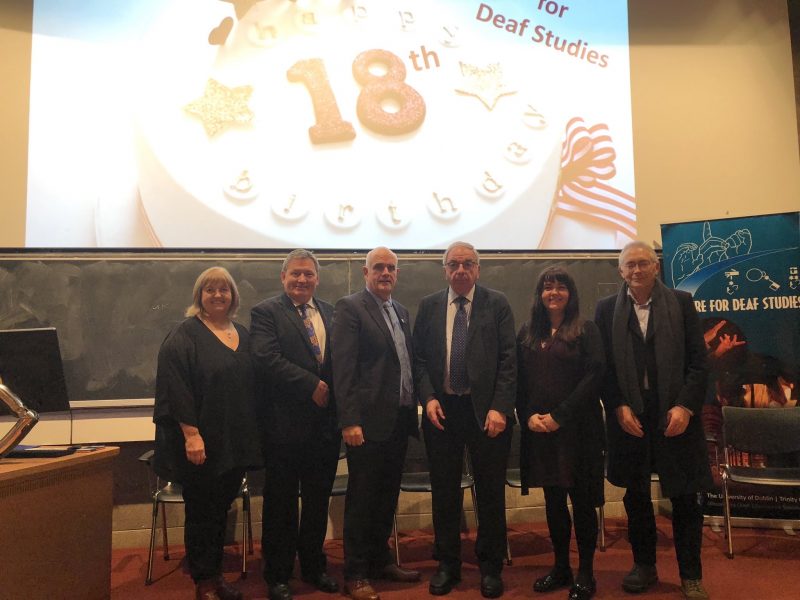 The aim of the Centre for Deaf Studies is to encourage the use of Irish Sign Language and to ensure that more people are aware of Deaf culture. It also promotes research and education in the area of Deaf studies. To date, more than 70 students have graduated from the degree and have become interpreters or teachers of Irish Sign Language or lecturers in Trinity’s centre.

For Dr John Bosco Conama, an assistant professor and the centre’s director, its existence is more than symbolic – it’s personal. “When I think of my life and my education, there was always a very low expectation in the schools because of society’s view. They felt like deaf people can’t do this, this and this in the future.”

As a person from what’s known as the “hearing world”, my first experience of the “Deaf world” – and the obstacles that come with it – comes in conversation with Conama. Through Ciara Grant, an Irish Sign Language interpreter, and with the aid of Katie Cannon, a fourth-year interpreting student, I’m able to “see” Conama describe from his “book” of obstacles his navigation of the Irish education system as a young deaf person.

“The schools at that time banned sign language. It was very much underground that you signed to other students. If a child was caught signing, they would be punished – I would have been punished for it. That’s the system we were dealing with at the time.”

As I watch Conama speak, and listen to Grant vocalise his harrowing story, the force of his words hits me. I am mesmerised. His hands form shapes with enviable dexterity while he moves his head, shoulders and upper torso, maintaining eye contact with Grant to convey his emotions and tonality to her – and, ultimately, to me, the “listener”. Grant’s task – embodying an entire persona and projecting the signer’s thoughts and feelings – is enormous. In many ways, she has to achieve the impossible: capturing the essence of language itself.

There are a lot of things that we don’t even think about. We do stupid things to attract someone’s attention, like calling them names or making noises

Conama is acutely aware of the demanding nature of the profession, and stresses the importance of degrees like Trinity’s for creating interpreters for the future. But what about teachers?

Dr Elizabeth Mathews, an assistant professor in DCU’s School of Inclusive and Special Education, tells me that the degree – which she founded – is “immensely important”. She says: “In the Deaf education sector in Ireland, for deaf children in classes, most – the overwhelming majority – are taught by hearing teachers who started off not knowing Irish Sign Language, and may be at a level below the children they are teaching.”

The best way to remedy the “immense difficulties” that this causes, Mathews says, is to “make teachers fluent so there is more seamless access to education for deaf students”.

And improving deaf studies in universities may be just the beginning. For Elaine Grehan, the Irish Deaf Society’s advocacy manager, “these courses are all great for raising awareness”, but they’re only part of the journey. In an email, she writes that “there needs to be more awareness within everyday society” if we’re to properly break the barriers of discrimination.

Indeed, considering many hearing people don’t see the Deaf community as they see themselves, bridging the gap between the two worlds is vital if we want to create a society that’s more inclusive. In University College Dublin (UCD), it was thanks to demand from hearing students for Irish Sign Language classes two years ago that this gap is slowly but surely shrinking. 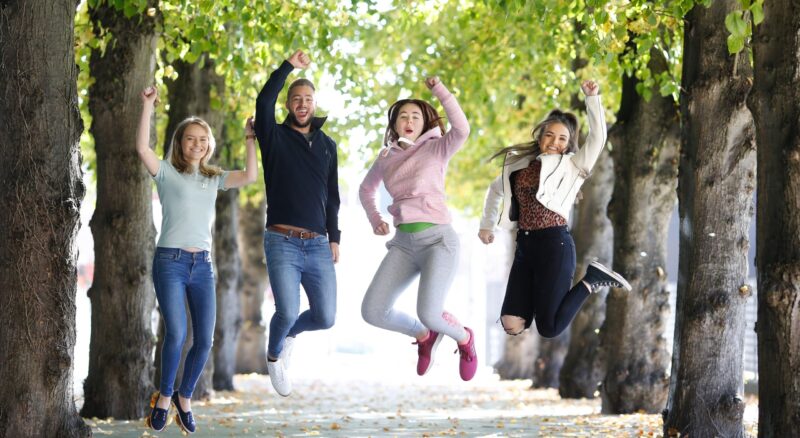 Dr Anna Nunan, the deputy director of UCD’s Applied Language Centre – which offers 12 languages to over 1000 students each term – is full of excitement as she tells me about the “tremendous” success of the Irish Sign Language elective. “If it wasn’t for availability,” she says, “we could fill two or three more classes a week on top of the existing three”. Pointing out the importance of learning Irish Sign Language as a hearing person, Nunan says: “There are a lot of things that we don’t even think about. We do stupid things to attract someone’s attention, like calling them names or making noises – we don’t realise these things so it’s really good to be aware.”

Encouragingly, Nunan isn’t the only one who’s noticed an improvement when it comes to the status of Irish Sign Language. Courtney McGrath, the disabilities officer of Trinity College Dublin Students’ Union (TCDSU), tells me that “people are becoming more aware that sign language is a language”. She points out the lessons that can be learned from the revival of the Irish language among young people.

Indeed, Ireland’s recognition of the Deaf community has come a long way. In 2017, the Irish Sign Language Act gave the language legal protection, and Conama tells me he is the first deaf person in Irish history to run for the Seanad. “It’s a good time to be a deaf student”, says Mathews.

As I wave goodbye to Conama and leave his office, I am reminded once again of how powerful language – in all its forms – can be. While language is and can undoubtedly be used as a communication tool, it is only when Conama reflects on what language means for him that I realise: it is the Deaf world’s – not the hearing world’s – words that resound most loudly: “For me,” he says, “language is part of humanity. It’s part of being human”.