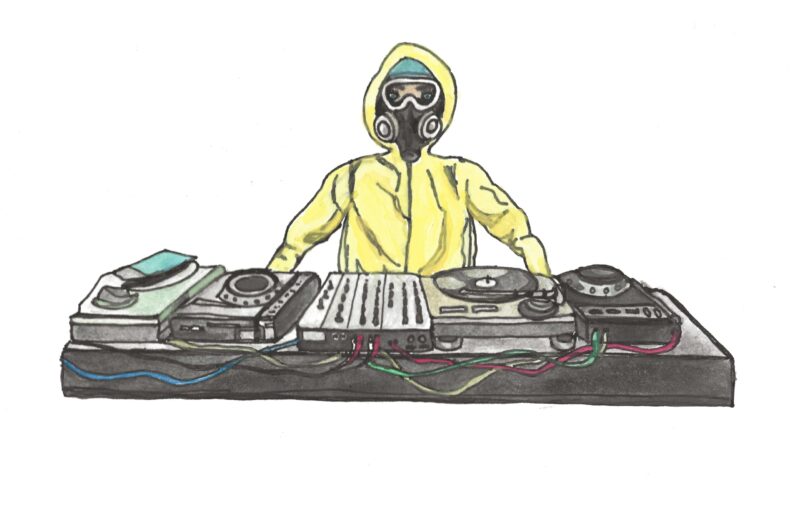 Amanda Cliffe for The University Times

All of us have come into contact with – if not been friends with – a self-proclaimed DJ. And, much like the coronavirus, the desire to become one appears to be highly transmissible. I don’t want to scare you, but you have probably been exposed to more than one DJ already, especially if you find yourself spending the majority of your time in the arts block around people who wear Doc Martens and beanies.

If only avoiding them was as simple as washing your hands.

Welcome to Trinity, where literally anyone can join the growing ranks of the aspiring Disc Jockeys and, upon buying one’s own slick DJ deck, proceed to desecrate real artists’ music with the pretension of someone who has composed a chart-topping work of art. You don’t need to have a sense of rhythm or even any musical talent – all you need is to master the knack of affecting said qualities. Oh, and it also helps if you dress like it’s 1982 and Wes Anderson is your dad.

There is no known cure for those afflicted, no sound-proofed quarantines to hide them away until they detoxify their systems of notions, so we have no choice but to let them roam free to spread their illness across campus.

The epicentre of this outbreak is located in the nightclub, where what some are calling Tiesto syndrome has grown virulent due to the influx of trendy live DJs on the scene, many of whom have ascended to stardom and set the standard for all other pretenders to emulate.

Having said that, I know that a club’s success can, in fact, largely hinge on the talent and ability of its resident or guest DJs, a mixmaster who can read the energy of an audience and provide a soundtrack that will have the house doing a collective boogie. Naturally, there are talented DJs out there, and DJing is a broad plane upon which endless variations can emerge – there are radio DJs, turntablists and club DJs, to name a few – and a rare few individuals actually do deserve to be lauded for their ability to mix, produce and create original content.

But the title itself bears no inherent distinction between the tone-deaf softboi studying philosophy who made a mix of two crap techno songs on SoundCloud, and the likes of Avicii or Calvin Harris. It’s like the college “activist” who goes to a single march and calls himself a pioneer of morality and change. What we’re dealing with here are the types of people who run around giving themselves titles to build an identity that they believe, either subconsciously or overtly, will bring them popularity and prominence on campus. So, in other words, posers.

A lot of DJs in Trinity dabble in the world of techno music, that repetitive electronic dance beat that sounds the same in almost every supposedly new interpretation. Techno is, in my mind, a bastardised version of house music. It trickled down from disco, which it also ruined.

Techno music is the soundtrack for inebriated twats who call themselves advanced in their taste, when in reality they just had a trippy experience hearing techno for the first time while yoked up and now perpetually refuse to acknowledge that techno is truly terrible, out of abject reverence for that original, transcendent moment of ecstasy in a dank basement with strobe lights and incessant electronic noises that mimic the dangerously fast-paced beat of their overworking hearts.

Sweetie, that is not good music. That is an excuse to do more drugs in more crusty clubs amongst equally mindless crusty individuals, and call yourself cultured.

But, by all means, enjoy. Just don’t call it good music. And when this “love” for techno manifests itself in a burgeoning desire to become a DJ yourself, to feel the thrill and power you’ve imagined those DJs in Hangar always felt, please remember your origin story, and that your taste in music is bad, and that proclaiming yourself to be a DJ does not make you interesting, and that I hate you.

I can already hear 14,000 of Trinity’s 17,000 students coming for my throat. (The DJ population has well and truly gotten out of hand.)

It may be too late for me. The mob may be coming for me with their pitchforks and Pioneer Pro turntables but for those of you who haven’t fallen prey to this contagion, my message is to protect yourself. Keep listening to your original artists and scoffing at titles that mean nothing. I don’t call myself a singer because I howl along to Joni Mitchell in the shower sometimes, and I don’t call myself a chef for cooking a stir fry every other night. Just be. Don’t throw titles around for the clout.

And if I hear one more person tell me they’ve become a DJ, I think it’ll officially be upgraded to the status of a pandemic.