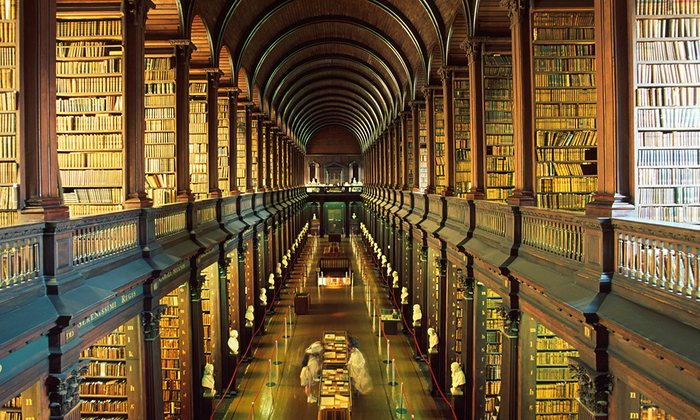 Trinity has received a grant of €2.7 million from Fáilte Ireland, Ireland’s government body for tourism, towards the overhaul of its Old Library.

The reconfiguration of the 300-year-old building is part of a College strategy to improve the conditions in a library that houses some of its oldest manuscripts and book collections, The University Times reported last September.

Speaking to The University Times last week, Trinity’s Bursar Veronica Campbell said that the refurbishment will be funded by a “tripartite model” of the grant, a loan and
philanthropic donations.

“We’ve got three lines of funding that we’re aiming for”, Campbell said. “Philanthropy is one, government funding is one – we already have €2.7 million from Fáilte Ireland, which is obviously a government body – and we would be making a case for additional government funding for that project.”

“Then there’s Trinity’s own resources, so we have our tripartite funding model which is what we’re pursuing in the business case”, she continued.

“Trinity’s own resources, particularly associated with what we sell in the shop et cetera – that will be kind of Trinity’s contribution, and then we’ll be looking to raise a loan for that, and then funding it through the ticket price and the visitor expenditure in the shop.”

Campbell confirmed that research collections currently housed in the facility “will remain accessible to the research community” during the refurbishment, but may be moved to a different location.

“From a logistics perspective, and library operations perspective, it might be a bit different, so the logistics team are working through how best to make sure that those materials can be made available during the construction works.”

The actual start date for construction work is not yet decided, Campbell said.

Last month, TheJournal.ie reported that Trinity could stand to lose out on up to €3 million in revenue over the coming months due to the closure of the Book of Kells exhibition, housed in the Old Library, due to the coronavirus outbreak.

The exhibition, reported to bring in around €12 million a year, is currently closed to the public due to social distancing restrictions.

There is no indication of when the exhibition – which shut down alongside the Science Gallery and Douglas Hyde – will re-open, and even three months’ closure could cause Trinity to lose out on up to €3 million ahead of tourist season