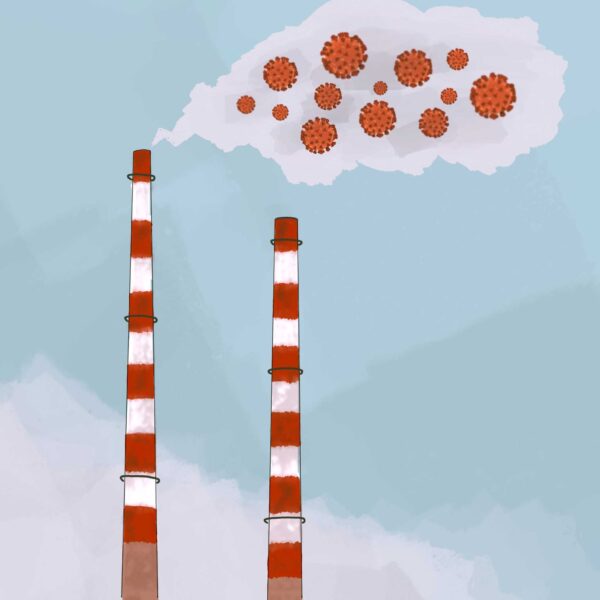 As the spread of the coronavirus led to a global pandemic and interrupted daily life as we know it, many speculated that the pandemic would have an immense impact on the environment – for better or for worse.

Some anticipated the return of wildlife to previously human-dominated, bustling urban landscapes which were emptied during lockdown. Some predicted a decrease in global greenhouse gas emissions which would improve the ongoing battle with climate change.

Opposing this, some hypothesized an infinitesimal reduction in carbon-intensive industrial practices, which would result in the assumption that those industries, rather than consumers, were to blame for the reckless pollution of the world’s biomes.

Months into the pandemic, scientists and researchers say we can now reflect upon how the pandemic has impacted the environment and the climate crisis and how it has played a crucial role in demonstrating the relationship between human society and the natural environment – but it doesn’t end there.

“Once the pandemic plays itself out in whatever way, there is still the enormous problem of climate change – which is very much the product of human hubris and the consistent marginalisation, neglect, and exploitation of the non-human world.”

Professor Michael Cronin is the director of the Trinity Centre for Literary and Cultural Translation. In an interview with The University Times, he says that the environmental implications of the current pandemic are deeply intertwined with culture.

The common divide between culture and science, he says, existed long before the pandemic, and feeds into how we, the general public, understand the pandemic and its impacts. The coronavirus has exacerbated this divide, with many scientific experts and medical officers speaking about the pandemic as a purely biological or scientific phenomenon.

One aspect of scientific communication that has been demonstrated through cultural responses to the pandemic is the inefficacy of using factual evidence to incite change or action in people.

For example, compare mask-wearing to climate action. During lockdown, there was official advice from medical experts for people to wear masks in public to decrease the spread of the coronavirus. Experts supplied the public with factual evidence as to how mask-wearing would limit transmission of the illness, and yet many continued to go mask-less. This, Cronin says, is “remarkably similar to many public responses to climate change.”

If medical advice isn’t working, then,what is? The answer Cronin provides is rather surprising: storytelling.

Cronin argues that it is not an “endless recitation of facts” which will sway crowds in favour of change, but rather, it is the use of stories, literature, and narratives which will help people best understand what needs to be done by “making the abstract concrete”.

Failure to do so, Cronin says, will only lead to the continuation of the ecological crisis and exacerbation of climate change.

Indeed, one narrative which the pandemic is telling is how the current relationship between human and non-human is destructive, environmentally and in other ways. This pandemic, Cronin says, and ones before it, have held a sort of “mirror” to the afflicted society.

In terms of the coronavirus, we have been shown that “we have sky-high levels of urbanisation, with increasingly large numbers of people packed together, with forms of global production and consumption that are systematically and relentlessly destroying animal habitats and creating life-threatening illnesses and diseases”.

In fact, according to a 2008 study, Cronin says that between 1970 and 2004, new epidemic diseases appeared, demonstrating that “not only are we failing to deal with a number of pandemic diseases, we are also, as a result of our perverse ecological practices, creating new ones all the time.”

Prior to the spread of the coronavirus, there was a continued “excessive, humanocentric hubris” which has allowed for our immense weakness to non-human agency, such as the coronavirus. “Unless we take the agency of other entities with whom we share the world seriously”, says Cronin, “then we are in dire straits”.

Another hot topic of discussion regarding the environmental implications of the pandemic is that it has been shown that it is largely industries and corporate bodies, rather than individuals, which are responsible for widespread environmental damage.

However, “the blame game is much more complex” says John Sweeney, an Emeritus Professor at Maynooth University who has served as President of the Irish Meteorological Society, the Geographical Society of Ireland, and An Taisce, the National Trust for Ireland.

The reduction in emissions which was observed during the lockdown is through a reduction in individual transport and personal mobility. However, this does not mean that the fault lies with individuals forced by house prices to commute three to four hours per day to city centres.

Instead, Sweeney says, the blame lies with “the planning system that has separated individuals so much from their workplaces”.

As many people have been stuck at home during lockdown to work and study remotely, there has been a significant increase in the use of streaming services and online conference platforms such as Zoom, and a decrease in our carbon footprint, which can be calculated thanks to companies offering carbon tracking services.

However, one footprint during lockdown that is less discussed is the energy footprint generated by data centres, which store all the data produced by the internet. This is not a nice footprint.

Speaking to The University Times, Dr Patrick Bresnihan, a lecturer in the Department of Geography at Maynooth, explains that many data centres are located in Ireland – in fact, Ireland is Europe’s data centre capital, with 54 centres in total and another 10 under construction – due to its cool climate. However, such centres use a large amount of fossil fuel-generated power.

“An interesting fact to consider,” Bresnihan says, is that “the energy consumed in the streaming of Tiger King in the US over 10 days in March was the same as the entire electrical consumption of Rwanda in 2016”.

This spells bad news for our environment: Ireland is one of the EU’s worst carbon emission offenders and with the data centre industry booming in Ireland, this means a further increase in emissions. So, it is good for business but bad for the environment.

But it is, as they say, not all bad. Rather, it is all about perspective.

With the lockdown, there has been what Prof Sweeney describes as a “re-orientation of perspectives” on working remotely or working from home. This has demonstrated “our capability to function without over-dependence on cars and to a lesser extent on face-to-face contact at meetings and conferences”, thus rendering cars and other carbon-intensive forms of personal transport rather unnecessary.

The take-away message from the lockdown seems to suggest then that the transition to a low-carbon society post-lockdown should be feasible.

Dr James Glynn, a research fellow at the Environmental Research Institute at University College Cork (UCC), also focuses on a reduction in personal mobility and daily commutes. He says: “One of the things that may stick is that people commute less and they work from home more. You would presume that emissions would be less.”

However, just like the situation where emissions produced from data are high even when transport emissions are low, it is unfortunately not that straightforward. “The flip side, Glynn says, “is that people are scared to take public transport and they do not want to. If they can afford to do it, they are driving”.

The upside to this in a post-coronavirus world, then, I wonder?

An increase in people using alternative forms of personal transport, such as cycling and walking, Glynn predicts. “Carbon emissions in transport is more a function of speed than it is of distance”, he says.

Although cycling from home to work may take three times as long as a car journey would, it produces zero carbon emissions to travel that same distance. “It is the speed by which we live,” Glynn says, “which is why we are producing so much carbon dioxide emissions”.

As the lockdown has allowed value systems to shift priorities, thus disrupting the status quo, the lasting impact of the pandemic may allow us, as Sweeney puts it, to “see more clearly the alternative ways of reaching a more balanced, sustainable future than was possible during the headlong rush to globalization and neoliberal economic policies”.

Bresnihan agrees: “The lockdown has shown just how entwined our individual consumption is with global supply chains,” he says. “If we can start to make these supply chains – and how unequal and environmentally destructive they are – more visible, perhaps there will be more support for the policies required to degrow our economies, including a shift toward more localised, sustainable, and equitable economic systems of production and consumption.”

And it appears that there is support for greener, more sustainable policies at an international level.

On May 28th, executive vice-president of the European Commission for the European Green Deal, Frans Timmermans, said that in order to achieve a so-called Green Recovery, European municipalities require green investments.

The EU plans on doubling its investment in sustainable infrastructure projects, with roughly €20 billion worth of investments. Such green investments include putting money into clean energy technologies, transport and industries.

As we emerge from the most dramatic and difficult stages of the pandemic, we must stay attentive to global recovery patterns and the immensity of the environmental implications of that recovery. Because ultimately, regardless of the pandemic, the fight against the climate crisis continues.