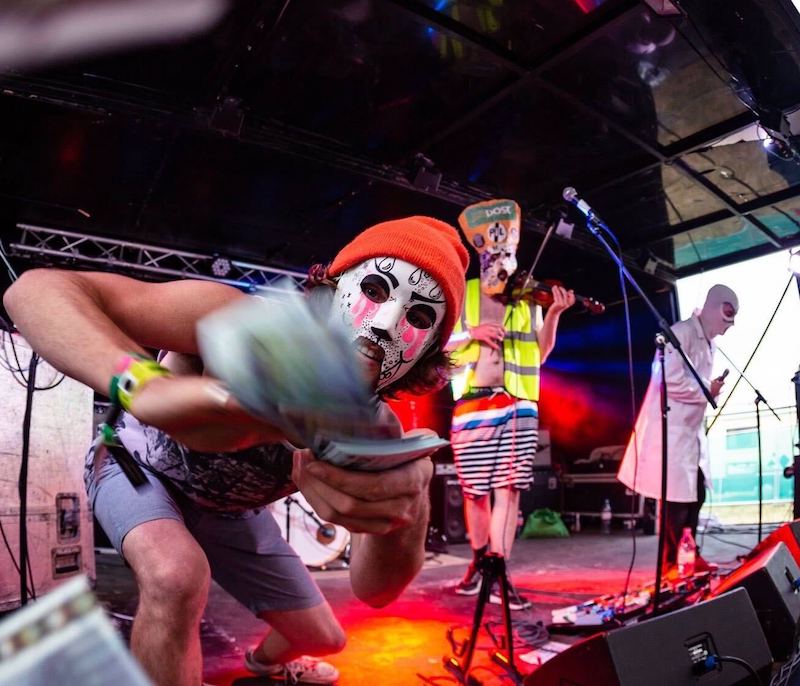 As one of Limerick’s many emerging musical talents, Post Punk Podge has been true to his name, releasing experimental tracks that weave together aspects of traditional instrumentals and modern electronic sounds. Due to his politically charged, anti-establishment lyrics, he risks coming across as preachy and self-indulgent – however, Podge’s satirical and humorous outlook succeeds in finding a balance, and is steadily securing him an underground cult following.

Similar to his musical style, Podge’s appearance epitomises the man’s unconventional approach to the art. His signature look of an An Post envelope – clad with stickers of local legends – pulled over his head, had a spontaneous and organic origin. When recording the track “Post Punk Election Party” alongside fellow Limerick native, Naive Ted, he needed an equivalent to Ted’s Japanese wrestling mask to wear on stage.

Acting not only as a means of anonymity, the disguise accentuates the artist’s confidence when performing: “When you’re the biggest looking eejit in the room, it makes it a lot easier to embrace the feeling and go along with it.” Drawing obvious similarities to Blindboy, Podge believes the plethora of masked Limerick artists with a surrealist approach to music can be explained by “a feeling of escapism due to the city having been oppressed for so long”.

When you’re the biggest looking eejit in the room, it makes it a lot easier to embrace the feeling and go along with it

In late September, Podge had two new releases. “Hard Man” was recorded with Micheál Keating from Bleeding Heart Pigeons and explores the doubly toxic and fragile nature of the male bravado. “I wanted to write something that was a comedic look on machismo”, he explains. “Basically, we’re all soft behind it all, despite how hard we claim we are.”

The inspiration that set the track in motion however, came from an unsavoury moment. “While busking in town, I was walking up the road to Tesco with a bucket of change and some lad tried to rob the bucket off me, acting pure hard in front of his girlfriend”, Podge remembers. “I was so angry after that, I went home and started putting the song together.”

Podge then reached out to Dundalk group, TPM, looking for lyrics on the same theme. Together with Graham Patterson, friend of the group, a music video was recorded and is now available on YouTube. The track and video succeed in capturing those comedic elements that Podge was seeking out, while also depicting the frangible tough guy aesthetic, giving “Hard Man” an added layer of sincerity.

Through powerfully vivid lyrics and daunting instrumentals, Podge takes a look at our country’s scarred past in “Haunted by History”. Following on from his focus on current issues like the housing crisis and political corruption, he “wanted to try and write something from a historical perspective”. Then, once he heard the dark-sounding beat, he had the overwhelming sense that “this has to be about the famine”.

What is striking is the song’s reference to colonialism, and its deep-rooted presence in today’s society. With lyrics like “it’s not that we speak too fast. It’s their thinking that’s too slow”, you get the sense that Podge is striving to break free from the self-deprecation that clings to Irish people. While taking these strong stances, Podge identifies “a growing nationalism amongst Irish artists”.

During our conversation, Podge also references an album that is currently in the works and will be released around January.
Podge’s ability to intertwine his earnest and passionate views with his beautifully bizarre sense of humour, means that you never really know what the next track will be about. However, you can guarantee they will be powerful, wild, and very much his own.
Post Podge’s two latest singles “Hard Man” and “Haunted by History” are available to stream from all major platforms now.