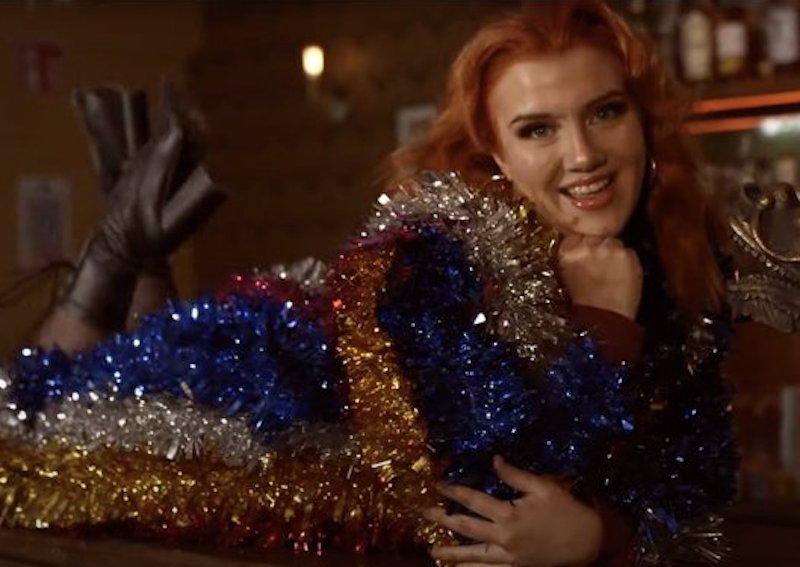 It’s starting to feel like every gig review these days must begin with a eulogy for the Dublin city gig circuit of yore. A moment’s silence is undoubtedly needed for sticky floors, missing support acts, watered-down pints, crashing into ghosted lovers in the pit and trying to contain yourself on the Nitelink home. Although, if there’s anyone that can emulate this chaos and transport it to someone’s living room, it’s Dublin artist CMAT.

Despite her eclectic online presence as a bimbo troubadour, and self-identification as a “Global Celebrity Teen Pop Sensation From Ireland” just three singles in, Ciara Mary-Alice Thompson, who performs under the moniker CMAT, is nothing to be sneered at. Formerly of the duo The Bad Sea, she blends meticulously crafted doo-wop hooks with a wryness that is both candid and wise. Dropping both universal truths and club bathroom confessionals, she has honed her unique left-of-centre pop sound with an aesthetic recalling of Dolly Parton and the best of 1960s camp.

From a series of promotional videos, Thursday’s online event, CMAT’s Very Nice Christmas, seemed closer to a bizarre riff on 1970s Top of The Pops than a live performance. For one night only, Whelans was transformed into somewhere between the Black Lodge, the Late Late Toy Show, and a rodeo. With zany hijinks between performances, alongside drag queens and acoustic sets from some of the capital’s best musicians, it was truly an unforgettable night.

With zany hijinks between performances, alongside drag queens and acoustic sets from some of the capital’s best musicians, it was truly an unforgettable night.

A jokey introductory monologue by Osaro of the Fried Plantains Collective, a project that organises social events for the LGBTQ+ and African communities in Dublin, kicked off the night. Once she had minced words about tax evasion and Fortnite, CMAT teetered onstage, looking prim and proper.

She performed her heartbreak hit “Another Day (kfc)” as her opening number, complete with impressive bellows and trills, and her trademark sense of humour. “This is where the saxophone solo goes but I couldn’t afford that so I have two drag queens instead”, she told her virtual audience, before calling Dublin performers Viola Gayvis and Maura Darragh onstage.

Next to take the stage was Rachael Lavelle, Rosa Nutty, and Maija Sofia, performing together in a balancing act that united the mellow with the saccharine. Their hushed harmonies maintained the space between yuletide melancholy and effortless coolness.

Following this was Lemoncello, whose reserved acoustic raucousness showed off their performers’ best qualities. Lemoncello’s expert harmonies, off the back of CMAT’s immaculate falsetto, made them the Vandellas to CMAT’s Martha – the HAIM sisters of everyone’s dreams.

Next, drag artist Maura Darragh performed a parody cover of Mariah Carey’s “All I Want For Christmas Is You” which was both parts X-rated and delightful, encapsulating what makes the Dublin drag scene so joyous and distinct. Then, for her own song “Rodney”, which is about what happens when someone you admire just doesn’t respect you, CMAT rocked up, tinsel-gowned, with all the panache of a 1990s hip-hop music video. Suddenly, a first-rate piece of alternative pop was made even better.

The night embodied festive melancholy, but with an array of musical talent that could only inspire hope.

Junior Brother’s “Hungover at Mass” then took centre stage. A series of comic but awkward vignettes, the performance was framed by the Kerry musician’s stirring talent. An ode to drink and the fear of God, the song was ruled by his guitar, muted and plucked harmonics softening the blow of its lyrical embarrassment.

He joined CMAT to perform their new original song, “Uncomfortable Christmas”. Encapsulating everything that “Baby It’s Cold Outside” is not, the folkish duet waxed lyrical about how small town Ireland can suffocate – and hating the smell of someone else’s winter jacket!

Arguably the highlight of the night was Pillow Queens’ stripped back performance of “Liffey”. With bassist Pamela Connolly fronting the song, they needed no instrumentals, no bright lights or brash live show, just the glittering backing vocals of drummer Rachel Lyons and guitarist Cathy McGuinness. Owning their sense of pride of place at a time when it’s needed most, their personal brand of strength through vulnerability was made even more potent.

Written long before lockdown, CMAT’s “I Wanna Be A Cowboy, Baby!” is nothing short of a perfect closing act – frankly, I don’t think any statement embodies the inertia and loneliness inferred on us by 2020 better than “always the cowboy, never the cow”. Junior Brother and Lemoncello joined the songstress, who was wrapped up in a stunning emerald-green tulle, for cascading instrumentals and vocals.

As the crowd and performers collectively yearned for greater freedom than we’re currently experiencing, this was the closest thing to a death knell for this shambles of a year. The night embodied festive melancholy, but with an array of musical talent that could only inspire hope. It’s what we wanted, needed, and deserved.