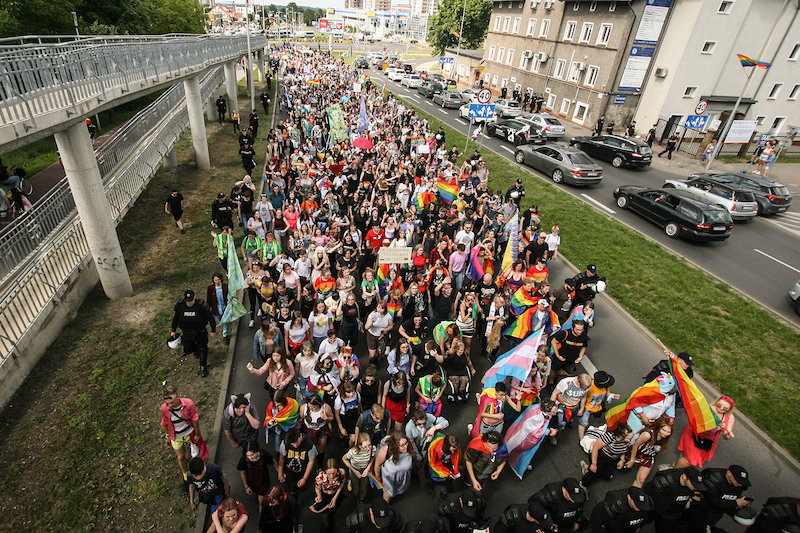 In recent years, Poland’s LGBTQ+ community has faced a staggering rise in homophobia, reckoning with waves of discrimination that it has been fighting against for generations. Since 2019, regions in Poland have declared certain areas “LGBTQ+ free zones”. These are areas where so-called “LGBTQ+ ideology” is not allowed or welcome, with a view to preventing LGBTQ+ marches or other events.

Since then, about a third of the country has become anti-LGBTQ+. These restrictive measures over such a vast geographical area, coupled with discriminatory statements from politicians, have turned Poland into an unsafe space for those who identify as LGBTQ+. Homophobic rhetoric extends to the highest office in Poland, with Polish President Andrzej Duda claiming that the “LGBT ideology” is worse than communism. Another Polish politician, Jarosław Kaczyński, claimed that Poland would become like Ireland, stating that Ireland is now a “Catholic desert with LGBT ideology totally out of control”.

Asia Kłos, who came out as bisexual last year, lives in the city Zielona Góra and is one of many young people throughout the country negatively affected by this increased display and institutionalisation of homophobia. Kłos says that “the anti-LGBT sentiment makes other people think we’re sick because of our sexuality – sometimes it gets dangerous out in public.” Although she finds support in her university peers and the Institute of Equality in her city, with which she is an activist, there is the constant fear of backlash because of her identity. “I would avoid holding hands with my girlfriend when out in public because we were scared someone would attack us”, she says.

This anti-LGBTQ+ sentiment follows students onto campuses, even though these are generally accepted as the safest spaces for them. “It also gets difficult when our professors make homophobic ‘jokes’ and I have to stop myself from getting into a discussion because I’m afraid this professor could fail me for standing up for myself”, Kłos admits.

The conflicting nature of wanting to be proud of their country while also wanting to be accepted for who they are is a struggle that many LGBTQ+ people in Poland face, Kłos explains. “I’m trying to still love my country, but the radical right wing makes it really hard. I really hope people will understand that LGBTQ+ people are people – not some insane individuals, not criminals, not rapists or perverts.”

“I want us to be seen, I want people to be more educated, and I really hope Polish LGBTQ+ people will be able to have the same rights as straight cis people do”, she adds.

A student who has worked in the Polish fashion industry for many years now agrees that the current attitude against the LGBTQ+ community is worrying, not least because people refuse to be educated. “Lots of my friends are homosexual and I can see how hard it is to feel free, to be saved, to be patient when the current situation is as it is.” He says that the government is not doing anything to protect people in this community from hate crimes, and that the police do not have the ability to do anything about it.

“The government must be changed or move on”, he says. “Those are people with big complexes and very limited ways of thinking so there’s no hope that they will change their decisions. New people and new political opinions are needed for rights that are LGBTQ+ friendly.”

Another Polish student, Magda Faszyńska, has many friends who are part of the LGBTQ+ community and feels increasingly uncomfortable with the current reality of homophobia in the country. “Poland has never been accepting of those in the LGBT community, but at the moment many in the Polish government are supporting these ‘LGBT-free zones’, and the Polish president claims that LGBT people are following an ideology instead of being themselves”, she explains

Many young people also question how this homophobic attitude fits in with Poland’s place as part of the international community, particularly as an EU member state. Faszyńska says that the government’s blatant discrimination “makes people scared about the future of Poland and their places in the nationwide community”. The prejudice of the government hasn’t gone unnoticed at an international level, however. In September, President of the European Commission Ursula von der Leyen said: “I want to be crystal clear – LGBTQI-free zones are humanity-free zones. And they have no place in our union.”

Olga Grodzka, a medical student in Poland, has the support of many around her but is fearful that the position of the LGBTQ+ community in Poland is at a breaking point. “I consider myself as a pansexual, and I am in a relationship with a woman. I am surrounded with awesome, open and broad-minded people. However, there is a lack of dialogue between the government and the LGBT community”, she says.

“Violent hate speeches, creating ‘LGBT-free zones’ on a third of Polish territory, complete impunity of politicians breaking LGBTQ+ rights every single day – all of these things have startled a lot of people”, Grodzka insists. Indeed, the rise of intolerance in the Polish government and throughout the country has been matched by a rise in support for the LGBTQ+ community. This has especially been seen in the form of protesting and activism, which has been moved primarily online due to the pandemic.

Kacper Kubiak, an avid activist for the LGBTQ+ community in Poland and the President of Instytut Rownosci (Institute for Equality) which helps to provide support for those in the community, describes the torrent of hate and lies that the LGBTQ+ community are facing in the country. For Kubiak, education is also central to activism. “Through educating everyone about the community and showing them that we are just like everyone else, we aim to change the current image that’s being painted of the community in the media and the minds of the Polish people committing these hate crimes and creating these anti-LGBT zones”, he says.

Kubiak adds that discriminatory rhetoric causes wide-spread damage that doesn’t just limit itself to physical attacks but also impacts mental health gravely. ”These claims and continuous restrictions made against the LGBTQ+ community in Poland are extremely harmful – they make them feel as if they don’t belong to society”, he says. “This is what causes the high rates of suicidal thoughts and depression in the LGBTQ+ community in Poland, some of the highest in Europe.”

The effect of this sentiment towards the LGBTQ+ community has spread beyond those living in Poland. Maria Pachowicz, a Trinity student born in Poland who identifies as non-binary, is extremely concerned by the issue. “We don’t have to look far to see the horrific effects that hatred and prejudice have, especially when it is legitimised by those in power”, they explain. As the former fundraiser officer of DU Amnesty, as well as the co-founder of LGBTQ+ Solidarity Ireland, Pachowicz has become an activist in Ireland supporting those in the LGBTQ+ community in Poland.

“We’ve heard of so many young Polish LGBTQ+ people taking their lives in recent years, and in all cases, this can be traced back to the violence they experienced as a result of their identity”, Pachowicz adds.

Julie Dory, liaison officer for Trinity’s Q Soc, says that “this issue needs to be confronted and talked about internationally, and the movements currently happening around the world are making people confront their governments and issues that are going on in their countries, as well as other countries”.

Universities are generally considered tolerant spaces: as bulwarks against discrimination, where education combats prejudice. It is, after all, students such as Kłos, Faszyńska, Grodzka, Kubiak and Pachowicz, who are energising the far-reaching movement for LGBTQ+ rights in Poland.