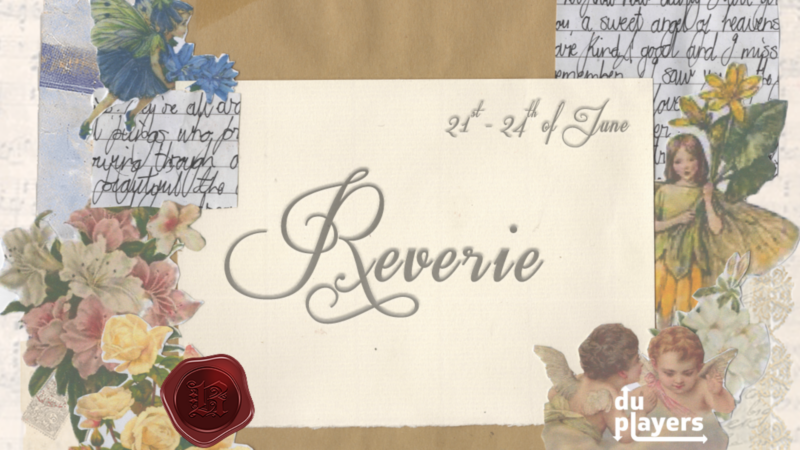 Introduced as “the festival of your dreams”, the ethereal woodland aesthetic underpinning Reverie, DU Players’ summer festival, promises an enchanting week of productions. Speaking to The University Times, two contributors to Reverie, Robyn Gill and Imo Redpath, summarise the festival as “cottagecore vibes”.

An outgoing drama and English student, Gill has co-written and co-directed a short film called Grianstad along with third-year English and Irish student Seirce Mhac Conghail as part of Reverie. Although the pair have collaborated on many projects within DU Players in the past, their final project together demonstrates their intention to do something “bigger and more ambitious” than before, as well as experimenting with the medium of film.

Grianstad, which marks Gill and Mhac Conghail’s short film debut, was inspired by conversations and ideas the pair had about using the Irish language while “taking inspiration from Irish history and mythology and incorporating elements of movement and dance”, Gill explains. Using these points of focus, she notes that Grianstad was ultimately inspired by the dreamscape of Reverie. The film is also set on the summer solstice, which coincides with the festival’s opening.

Despite the time constraints of only having a month between the film’s confirmation within the Reverie programme and its premiere, Gill believes that this pressure gave the production momentum. Although coronavirus restrictions and the challenges of filming in the Dublin mountains also impeded the production process – especially the amount of midges (“wear insect spray!”, she warns in retrospect) – Gill emphasises that in-person filming was a highlight of the production.

The back-to-nature elements of Reverie are central to Grianstad, which tells a classic coming-of-age story but is “a bit more sideways” and includes a “much more mysterious, magical element”, the pair explain. The show promises an enticing and mystical watch for audiences at 6pm tonight.

Imo Redpath, an outgoing drama and French student, is the creator of Swallow’s Nest, which she describes as a “comedy-drama radio play in three parts”. The play follows a 29-year-old woman named Olive who decides to leave Dublin for the English countryside and moves into a cottage left behind by her late aunt. For Redpath, the piece encapsulates Olive’s search for companionship away from the rat race, while uncovering the secrets that her aunt left behind.

As creator of the show, Redpath guided a team of seven writers through a two-week writing process as they pieced together the characters and storylines for Swallow’s Nest. She then edited the script they had written to fit the intended tone of the play.

Redpath credits the burst of pandemic-driven innovation from DU Players that resulted in experimentation with a range of new formats, such as radio plays, for giving her the inspiration to create her own radio play. She also confesses that she finds the radio play a highly “liberating medium to write in”.

Audiences can expect “a comedy-drama set in the Cotswolds with predominantly Irish characters”, she adds. Her goal for Swallow’s Nest is to confront the tensions between the city and the countryside as well as companionship and loneliness. These thematic strands are tied together, she explains, by a focus placed on “a love for birds, cups of tea and great literature”.

Reverie promises a myriad of different takes on the festival’s ethereal theme, ranging from the enchanting mythology of Grianstad to the cosy cottage aesthetic of Swallow’s Nest, and much more.