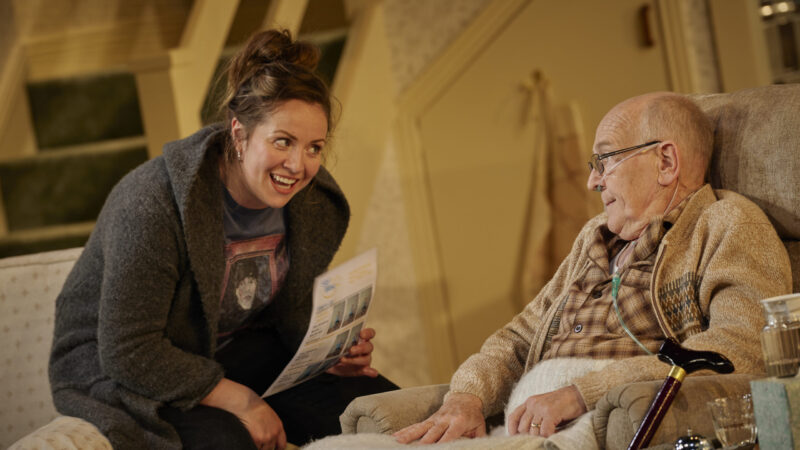 I’ve been very lucky during the pandemic – my family gets along relatively well, though naturally we don’t always see eye to eye. As I sat down to watch One Good Turn, I found the show a breath of fresh air and a fairly accurate portrayal of living with family. Despite its simple plot, One Good Turn succeeded in its simplicity through compelling characters and balancing harsh realities with comedic levity.

The show followed the McKenna family over the course of a single day from the moment Brenda, played by Catherine Byrne, appeared in the kitchen to the moment Bosco Hogan playing the chronically ill Frank stumbled upstairs to bed. Despite each family member having their own issues in addition to the pressing problem of Frank’s chronic illness, there were moments of comedy that helped paint a portrait of how messy and yet uplifting family life can be.

The opening scene featured Brenda, the ever-worried matriarch, as she wandered around the kitchen setting up for the day. Byrne’s fussing with the radio playing in the background reminded me of scenes that occurred around my own kitchen table, especially on busy school mornings. This was amplified after Fiona (Liz FitzGibbon) appeared in the kitchen and slated the radio presenter for his distinct lack of empathy and seemingly exclusive interest in the negative, something my siblings and I have often remarked on.

One of the few criticisms of the play became evident after this scene in that it seemed like the actors were not used to performing onstage in an ensemble cast after a year of socially distanced theatre. While the actors did eventually settle into their roles, I got the sense that they weren’t always sure how to play off each other and at times this resulted in acting that felt over the top and even a little kitschy.

Small objects such as a ruined pan acted as vehicles for larger confrontations between characters, mirroring the ways in which these arguments happen in real life. Aoife (brilliantly played by Aoibhéann McCann) made a Baked Alaska in one of Brenda’s favourite pans and badly burned it, which led to a bigger argument about how irresponsible and careless she was in comparison to Fiona. These little moments reflected not just the difficulties of family life, but also the tendency to use smaller objects in an almost allegorical representation of a larger issue.

Something that truly stood out to me was the slightly dysfunctional dynamic between sisters Aoife, home from London for a wedding, and Fiona, unemployed, living at home, and unsure what to do with her life. Although they bickered with each other and mocked the other’s life choices, the sisterly bond between them was clear and the two always made an effort to reconcile after each argument.

Much like real sisters, they argued to no end, but they stood together when it mattered most. The play was at its best when these two shared the spotlight as their dynamic really spoke to the ways siblings inadvertently hurt each other while also deeply caring for one another.

One particularly tender moment between the two sisters was when Aoife, concerned for her sister’s mental state, suggested Fiona might become a writer. While Fiona dismissed the idea, it showed a fondness between them that anyone with siblings would recognise. These two women are given the space to grow as characters over the course of the hour-long play, and I got the sense that both understood the other better by the end.

Despite the themes of death and illness weighing down even the brightest comedic scenes, the play never felt unbalanced, and ended on a brilliantly played comedic beat between Aoife and Frank. The show revealed how imperfect family living is, especially when dealing with trauma, while also showing the audience how important a simple word or gesture can be. Overall, the play was a highly engaging breath of fresh air amidst the chaos of the pandemic, and a very welcome comeback for theatre after more than a year of isolation.

One Good Turn is available to watch on demand until July 10th. There is also an Irish Sign Language performance available. Tickets can be bought on the Abbey Theatre website.