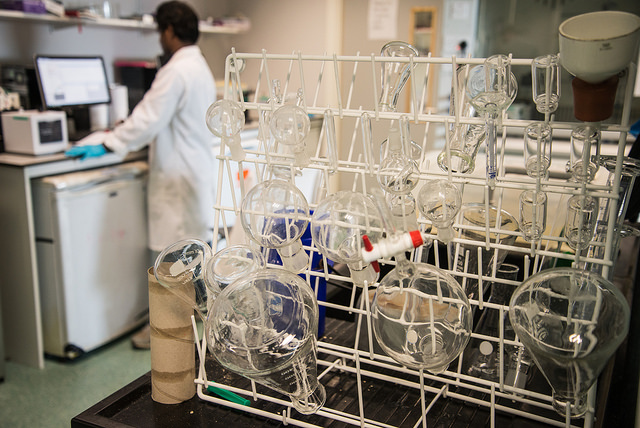 Trinity quantum chemists have found that gold, silver and copper hydride complexes may effectively store hydrogen – a discovery that could allow the gas to be transported for use as a sustainable fuel.

Because hydrogen gas releases large amounts of energy when burned in oxygen but does not produce carbon dioxide – or other harmful greenhouse gases – it is considered a possible solution to the climate crisis.

The fuel could be used to power vehicles, ships, or even planes, but because of its high volatility, hydrogen must currently be stored at extremely low temperatures or high pressures, restraints which are very expensive.

Dr Cristina Trujillo and PhD candidate Inigo Iribarren’s work, in co-operation with researchers from the Instituto de Química Médica in Spain, aimed to find materials that can store hydrogen in the solid phase before it is released again as a gas.

Trujillo and Iribarren used free energy profiles to analyse the theoretical abilities of the metal hydride complexes to release hydrogen in its elemental form.

These profiles show chemists whether a given reaction is thermodynamically favourable.

The scientists found that certain combinations of gold, silver and copper hydrides, called homodimers and heterodimers, are strong candidates for efficient hydrogen storage.

Speaking after their work was published in Chemistry Europe, Trujillo said: “Our contribution here – made via quantum chemistry techniques – has been to show that gold, silver and copper hydride complexes are very likely to effectively retain hydrogen in a stable manner.”

She added: “Among the greatest challenges facing humanity is the growing need to stop global warming and find more efficient and cleaner ways to produce energy.”

“As everybody already knows, the current production system and excessive use of fossil fuels is releasing much more CO2 into the atmosphere than is being absorbed naturally, which makes the creation of greener and more environmentally friendly alternatives a global priority.”

“For decades now, many research groups across the world have put their efforts into this issue. One of the most studied alternatives has been hydrogen as a clean and CO2-free energy source, but it presents multiple problems due to its reactivity, and low density and stability.”

In July this year, School of Chemistry Professor Max García-Melchor and PhD candidate Michael Craig found nine predominantly chromium-based complexes which could serve as cost-effective catalysts for the production of hydrogen.

These potential catalysts would allow for the decomposition of water to produce hydrogen gas for use as a fuel.

Catalysts with the ability to efficiently split the water molecule have already been found, but because they tend to rely on rare metals such as ruthenium, they have thus far been too expensive to provide a major breakthrough.

The Trinity research has focussed on complexes composed of “earth-abundant” metals and inexpensive ligands. The team now plans to investigate the nine potential catalysts with the hope that at least one may be efficient enough to sustainably produce hydrogen.

In a press release, García-Melchor explained the process his team has been on to find “the holy grail of catalysts”.

“Until recently we were looking for a tiny needle in a huge haystack”, he said, “after reducing the size of the haystack, we have now hoovered up plenty of the remaining hay”.

“To put a sense of scale on this, two years ago we had screened 17 catalysts. Now we have screened 444 and believe it won’t be long before we have a database with 80,000 ‘screenable’ catalysts in it.”

Craig added: “A lot of research has focused on the effective yet prohibitively expensive metals as possible candidates, even though these are far too rare to do the heavy lifting required to store enough hydrogen for society.”
“We are focused on finding a long-term, viable option. And we hope we will”, he said.