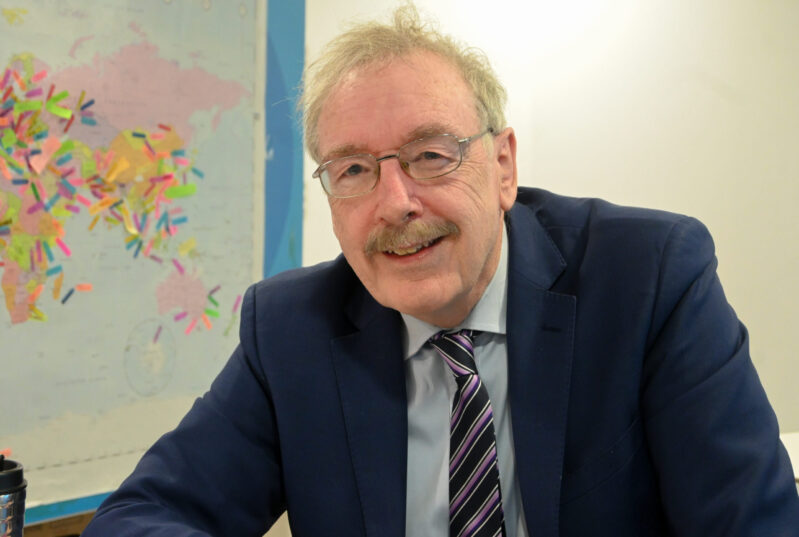 “I don’t want to boast, but I had a very, very successful career”, Ray Bassett tells The University Times. And certainly, Bassett’s CV is extensive. He has served as Irish ambassador to Canada, Jamaica and the Bahamas, was involved in the Good Friday Agreement negotiations and has “sat in the Oval Office with the Irish Taoiseach talking to two US presidents”.

Hoping to swap foreign affairs for domestic politics, Bassett is now contesting the upcoming Seanad bye election. He is running on a broad range of issues, including opposing the creation of a federal Europe, defending free speech and promoting the Irish language.

Indeed, Ireland’s place in the EU is perhaps the issue on which Bassett has been most outspoken. Outlining his problems with the bloc, he says: “It’s the movement away from a co-operation, and deep co-operation among nation states, towards a centralised Europe [in] which we will be one per cent, one to two per cent of the population.”

“We should be very careful about handing over democratic control because we were in an empire for a very long time.”

When asked why he is running for the Seanad, then, given that it has been criticised for being undemocratic and elitist, he says: “It is amazing that the only place where you get a reasonable political discussion in Ireland is the relatively undemocratic Seanad.”

But he calls the extra representation given to Trinity and NUI graduates “an anachronism” and believes that “in the longer run, the Seanad will have to be reformed”.

He says he previously called on Ireland to leave the EU to “stimulate debate”, arguing that those who do question the bloc in any way are ostracised. “If you sort of query the central thing, you’re almost a Neanderthal or you’re sort of beyond the pale.”

“I think we should be prepared to discuss these things and discuss them openly, which we don’t in Ireland at the moment.”

If you sort of query the central thing [of the EU], you’re almost a Neanderthal or you’re sort of beyond the pale

Bassett also wants to improve Ireland’s relationship with Britain. He says following the Brexit vote, an attitude of “kick the Brits” developed among senior civil servants. “It was completely different from the period when I was working with Bertie Ahern and Tony Blair, then we had a co-operation, we had a trust. We tried to work with each other.”

Promoting the Irish language is another issue Bassett’s campaign is focusing on. However, he found himself at odds with many of his opponents for the vacant Seanad seat on the broader issue recently, when he referred to the promotion of Irish to full working status in the EU as a “meaningless gesture”.

Bassett stands by his previous comments: “It’s just the thought of these people – bright, intelligent people – sitting down, translating documents about … the pH of water in canals in Venice. What is the point?”

“I would much prefer to see a good Irish language newspaper here. I’d love to see greater support for Irish-language education”, he says.

These people – bright, intelligent people – sitting down, translating documents about the pH of water in canals in Venice into Irish. What is the point?

Will he push for more debate on climate change as well?

Bassett believes a “realistic” approach is needed. He believes green policies must be affordable and phased in slowly, otherwise “they are in danger of being destroyed by a populist backlash”. He is also in favour of Ireland exploring nuclear power, but notes that view “is probably going to make me unpopular”.

“We don’t want to be burning fossil fuels but, you know – we can’t freeze.”

While he’s an incrementalist on climate action, Bassett favours more immediate intervention when it comes to housing. “The state needs to get involved. The state can borrow money at levels that nobody else can.”

He favours deregulation, as he says a lot of the building standards brought in have been “counterproductive”. He also believes that “private landlords are being driven out of the market” by vulture funds.

We don’t want to be burning fossil fuels but, you know – we can’t freeze

Healthcare is another issue Bassett wishes to challenge the government on. He says: “It’s a particular area that interests me”, having “started life in the healthcare industry”. Bassett graduated from Trinity in 1979 with a PhD in biochemistry and worked as a biochemist.

In the Mater and St Vincent’s, where he has worked, he says “the level of waste is unbelievable”.

He also wants “to take on the fact that it’s so hard for foreign doctors here to actually become consultants”.

Bassett says that Ireland aspires to the National Health Service but points out that it has significant shortfalls: “In Belfast, it’s virtually impossible to get a GP.” He’s also unsure whether Sláintecare is really “the panacea that everybody says it is”.

On education, Bassett considers declining levels of social mobility to be “one of the biggest problems” and refers to himself as “a product of Donogh O’Malley’s reforms and my parents’ sacrifices”. Unsurprisingly, then, the issue of increasing access to education is important to him. “We need to have excellent universities but we also need to make sure that people from disadvantaged areas have a chance of getting into those universities, as much on merit as they possibly can”, he says.

We need to have excellent universities but we also need to make sure that people from disadvantaged areas have a chance of getting into those universities, as much on merit as they possibly can

“Some things like putting extra resources into schools in disadvantaged areas … should be looked at”.

When asked about his views on the controversial Higher Education Authority Bill, Bassett concedes that the state has a right to protect its investment. “You cannot go off with taxpayers money and decide ‘we’re an independent institution, and we can do what we like’. You can’t. They have to be answerable.” Although, “you don’t want government control”, he adds.

On the issue of whether Trinity should have been made exempt from certain provisions of the bill, he says: “Don’t start beating too much about how special a case you are … try and work with the system and expose where the government wants to take control and where you believe that we need a greater degree of operational responsibility.”

The candidate has previously opposed mooted legislation which would criminalise Holocaust denial, but he insists that he is in favour of anti-discrimination legislation. “Real hate speech is something that we all abhor.”

But he has questions about the idea of criminalising hate speech. “Who is going to be the arbiter of what is hate speech and what isn’t hate speech?”

Online, he has also retweeted the far-right Irish Freedom Party multiple times, as well as doing interviews with right-wing media outlet Gript on several occasions. He also spoke at the launch of the party. When asked why he would associate himself with such a party, he says: “I don’t associate myself with any group, I spoke at the British Conservative Party Conference, I spoke at the Communist Party. I spoke with Sinn Féin, I’ve spoken with Fianna Fáil”.

Who is going to be the arbiter of what is hate speech and what isn’t hate speech?

When pushed on the Irish Freedom Party’s views on immigrants he says: “The one thing I agree with the Freedom Party on is that we need to have a rational immigration policy.”

“If people have criminal convictions, if they have had a history of essentially disruptive behaviour, or if they’re not adding to our society here I think we should have the right to say no, as every other country has.”

“But if you say that sometimes you get tarnished with extreme groups”, he says.