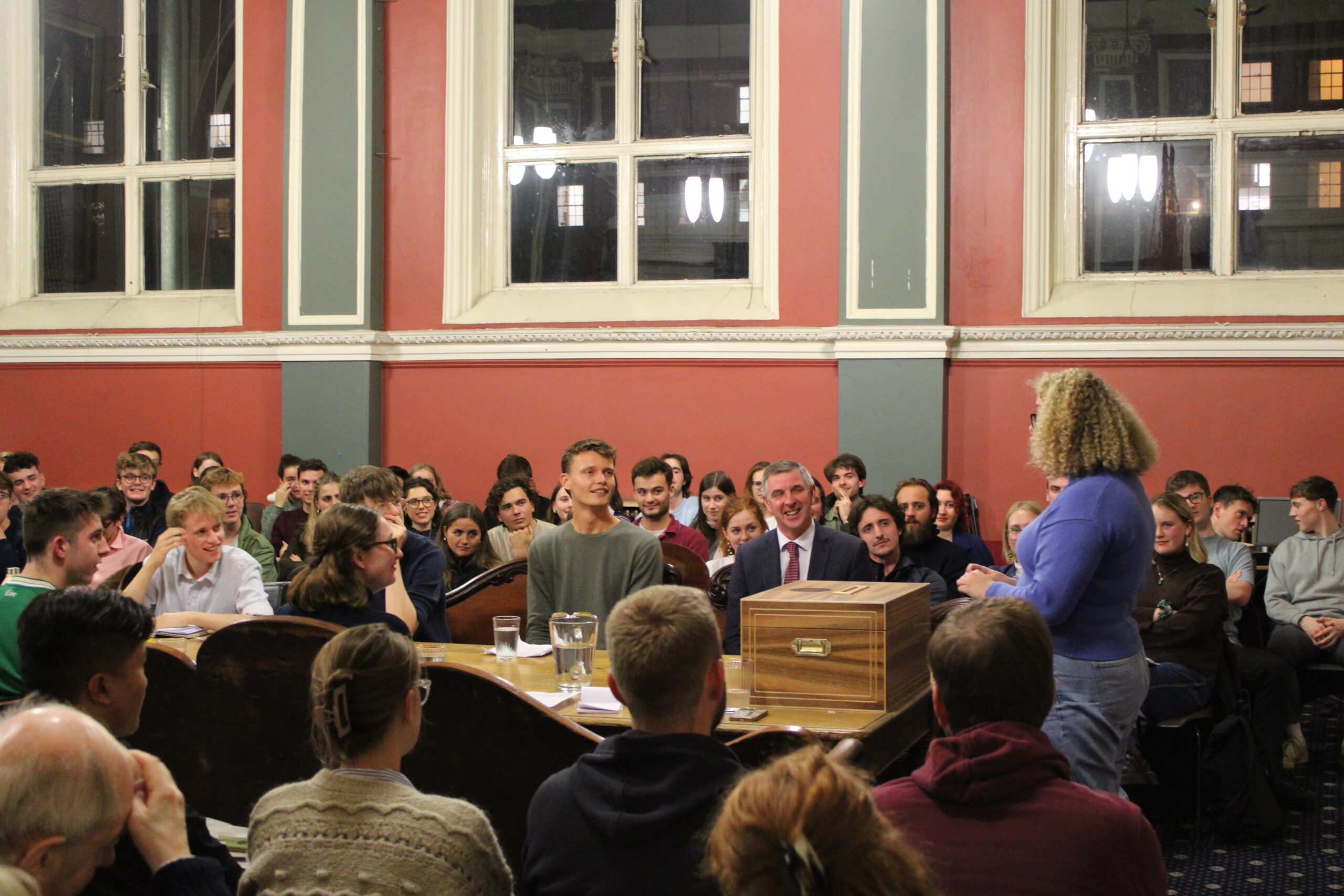 Discussion of monarchical rule took centre stage on Wednesday, October 19th, in the Graduates Memorial Building (GMB) as the College Historical Society (the Hist) gathered to debate the motion, “This House Believes the British Monarchy Has a Place in the Modern World”. As the last Hist chamber debate before reading week, the society went out in dramatic fashion, drawing high attendance and a spirited discussion.

Following arguments on both sides of the table surrounding the real consequences of monarchy, what the modern world values and the legacy of colonialism, the House voted soundly against the motion, voicing its support in favour of a future without the British royals.

The night oscillated between the comedic and serious, with proposition speakers Ian Marshall, an Ulster Unionist Party politician, and University Times sports editor Charlie Moody-Stuart arguing in favour of continuing the monarchy. They cited grounds of the monarchy as a stabilising factor, its popularity among British citizens and its support of the economy as a tourism draw. Marshall argued that the monarchy’s benefits outweighed its detractions once one removed one’s “unconscious bias”.

These political points were countered by early opposition speakers, University Times news editor Hosanna Boulter and second-year history and political science student Mary Woods. Boulter responded that the current monarchy not only runs counter to modern values such as, in her own words, “democracy with plenty of debate”, but is also weighed down by its imperial legacy. Woods pushed back against the supposed economic benefits of the monarchy: “Ticket prices to Versailles didn’t decrease because they cut the king’s head off.”

Third-year student Frank Wolfe brought a change in tone for the proposition’s points: the monarchy is worthwhile, he said, because “it’s just good craic” rather than a relevant political entity. Wolfe claimed that the monarchy plays “an integral role in Irish culture” as “an entertainment machine”.

Political discussion returned to the podium with opposition speaker Adam Duffy, who asserted that the British monarchy was “founded in the 10th century and since then has caused great harm and hurt”. Figures like King Henry VIII, Edward VIII and Prince Andrew “aren’t worth looking up to”, he continued, and the money spent on the monarchy today could be going towards something “actually useful”. He concluded: “Liz is gone, and it’s time to move on.”

In a speech with a decidedly unique tone, Hist Pro-Record Secretary Tom Francis jokingly adopted the character of an Australian anthropologist deep undercover in British society as part of an extended study to determine “why they needed a national mommy and daddy”. Outlining the data he uncovered (which included conclusions that the British are “just a little bit silly” and “socialised to be evil”), Francis eventually revealed that, in the course of his study, he had gotten “too close” to those he was meant to be studying. Drawing laughs from the audience, Francis concluded by asking, “are you guys heart surgeons? Because by siding with the proposition, you’re saying my heart doesn’t belong in the modern world”.

Concluding the debate, fourth-year sociology student Darragh Matthews took on the opposition’s claim that the monarchy’s value lay in its role as entertainment, countering that the royals had “completely lost the sauce” and were now in their “flop era”. Matthews cited Game of Thrones as an example, which, through its depiction of events like the 15th-century War of the Roses, is a “throwback to when the monarchy was actually thrilling”. Meanwhile, according to Matthews, “the monarchy has had so many opportunities to embrace modern life and failed to do so”.