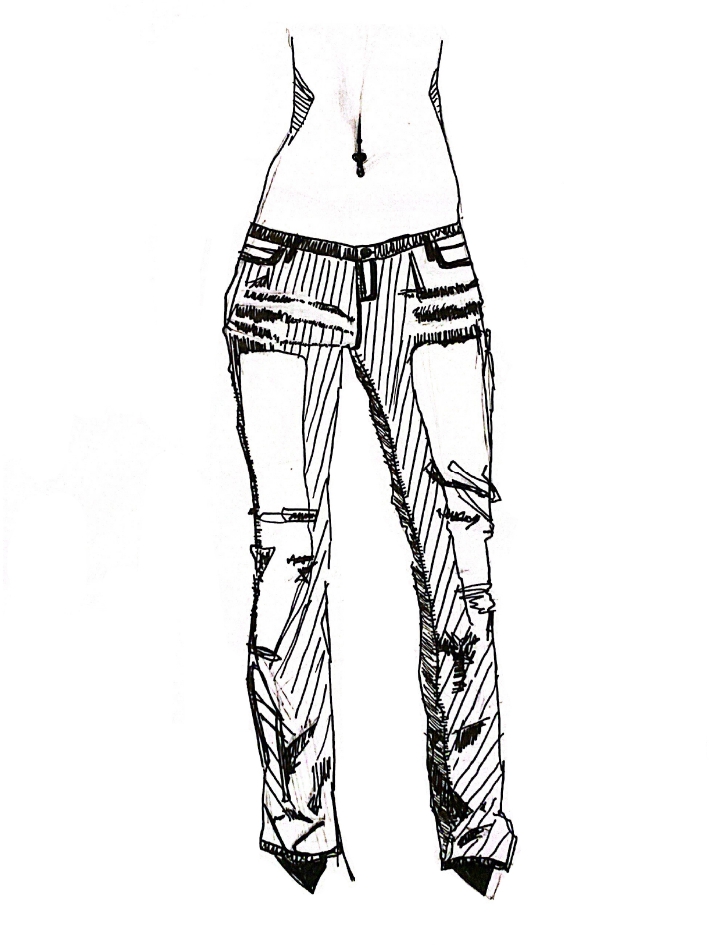 Gus McCowan for The University Times

Everyone knew it was coming and everyone was dreading it. Not the purge, but the return of low-rise jeans.

When the Y2K revival began, people picked what they liked from the 2000s. Juicy Couture tracksuits, mini shoulder bags, Von Dutch hats, corsets, fun prints and graphic t-shirts were all welcomed with open arms. Then people started to get bolder. Micro mini-skirts and bucket hats became popular. Then, all of a sudden, low-rise jeans started popping up one by one around the Arts Block.

For a long time, public consensus has maintained that low-rise jeans are “not giving”. It’s not that they’re uncool or even look bad, it’s just that the 2000s wardrobe-staple can be uncomfortable and unforgiving on most body types. The latter description, however, is probably influenced by the beauty standards of the time. Low-rise jeans were designed for that thin, Paris Hilton body type that was so idealised in the 2000s.

The rise of low-rise also seems to have coincided with a general return to 2000s beauty standards and fashion ideas. The Kardashians are allegedly having their Brazilian butt lifts (BBLs) reversed, and demand for the procedure has declined, indicating that perhaps the dangerous surgical trend is on its way out.  Unfortunately, neither the body trends of the 2000s or the 2010s have been particularly kind or inclusive. The 2000s worshipped thinness, and during the 2010s beauty standards embraced curviness to an unrealistic extent and completely redefined womanliness. The second half of the previous decade saw far too many women opt for one of the deadliest cosmetic procedures available: the BBL. We’re all “real women”, regardless of curves. We can change our clothes and hairstyles, but we can’t change whether we’re pear-shaped or hourglass-shaped. Therefore, it’s ridiculous that body types are subject to the type of trend cycles such as clothes and hair.

The high-waisted jeans of the 2010s accentuated the highly sought-after curvaceous body type that the Kardashians championed. The low-rise jeans of the 2000s displayed washboard torsos, which was the only body type deemed acceptable at the time. Many of us who grew up during the 2000s were prematurely aware of weight, calories, size charts and the thin ideal from a young age. Kellogg’s Special K commercial, with the iconic red dress, seemed to advertise the idea that the only reason to eat breakfast lay in the evidence that people who ate breakfast had a smaller waist than those who didn’t – not because it would set you up with energy and vitamins for the day. Looking back now, I don’t see how tabloids could have considered Bridget Jones, Kate Winslet, Jessica Simpson or Tyra Banks to be “plus-size”.

This is why most people seem slightly traumatised when discussing the return of low-rise jeans. It’s not the jeans themselves, but it’s the ideals that came along with them. Low-rise jeans are pretty cool. Especially those 2000s Victoria Beckham jeans with the crystal embellished crowns on the back pockets or the Juicy Couture jeans with similar embellishments. People would probably embrace the trend openly if it didn’t have so many negative associations.

Hopefully, with the rise of the body positivity movement, we can embrace all of the 2000s trends without also reviving those harsh beauty standards. The Y2K revival comes from childhood nostalgia, and we don’t have to include the negatives. It was a fantastic time for fashion, with a lot of enjoyable and playful trends. Ideally, we would all just wear the jeans we feel comfortable in. But for the moment, the low-rise jean is making a comeback. The next step from here is probably a side fringe. Bonus points if your hair is lifeless from daily straightening.