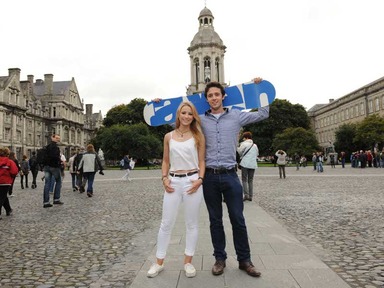 Trinity College graduates Aoife Considine and Alberto Cañizares came out on top of the €2,400 Irish category of the James Dyson award earlier this month. The pair, who studied mechanical engineering in Trinity, combined both passion and ingenuity to come up with their triumphant idea – a DIY Snowboarding invention called ‘Boundless’.

Avid members of DU Snow Sports, Considine and Cañizares based their design on problems that they themselves identified while on the annual SU Snow Sports ski trip to the Alps. The two set about seeking a solution to the issues in their Junior Sophister year as part of their ‘Engineering Management’ module. Considine says that they “jumped at the chance” to enter their project for James Dyson award, but “never believed [they] would actually win”.

‘Boundless’ is an innovative development not seen before in the world of snow sports. The contraption aims to remove the difficulty snowboarders face with adjusting their bindings to suit the gradient of the terrain. Snowboarders, unlike skiers, do not have poles to push themselves along across flat surfaces once they’ve lost momentum and as such are often faced with the arduous task of changing their bindings – a task that requires the use of a screwdriver and can cause injury if the snowboarder trips over themselves.

Cañizares, who is himself a skier, asserts, on Boundless’ profile on the James Dyson award website, that he grew fed up of waiting for his snowboarding friends as he pushed himself on ahead or even having to drag them along flat surfaces. Current binding technology also places a strain on the knee and ankle joints while snowboards ride chairlifts, as riders must twist their limbs to sit comfortably. Considine herself attests to this in the promotional video the pair made for their successful endeavour.

In essence, Boundless is a 360-degree rotational snowboard attachment. The technology of Boundless eradicates most of the trouble snowboarders face by providing bindings that can swivel on a base-plate to assume a forward-facing position This means that snowboarders can propel themselves along flat surfaces with ease as though they were riding a skateboard, an improvement which makes snowboarding significantly less precarious.

Their success means that they will also be in with a chance of winning the James Dyson international award, and the grand prize of €35,000 that comes with it, with smaller prizes available should they secure a runners-up place. They will compete with winners of domestic awards from 18 countries, and will secure over €10,000 for their university department should they repeat their success.