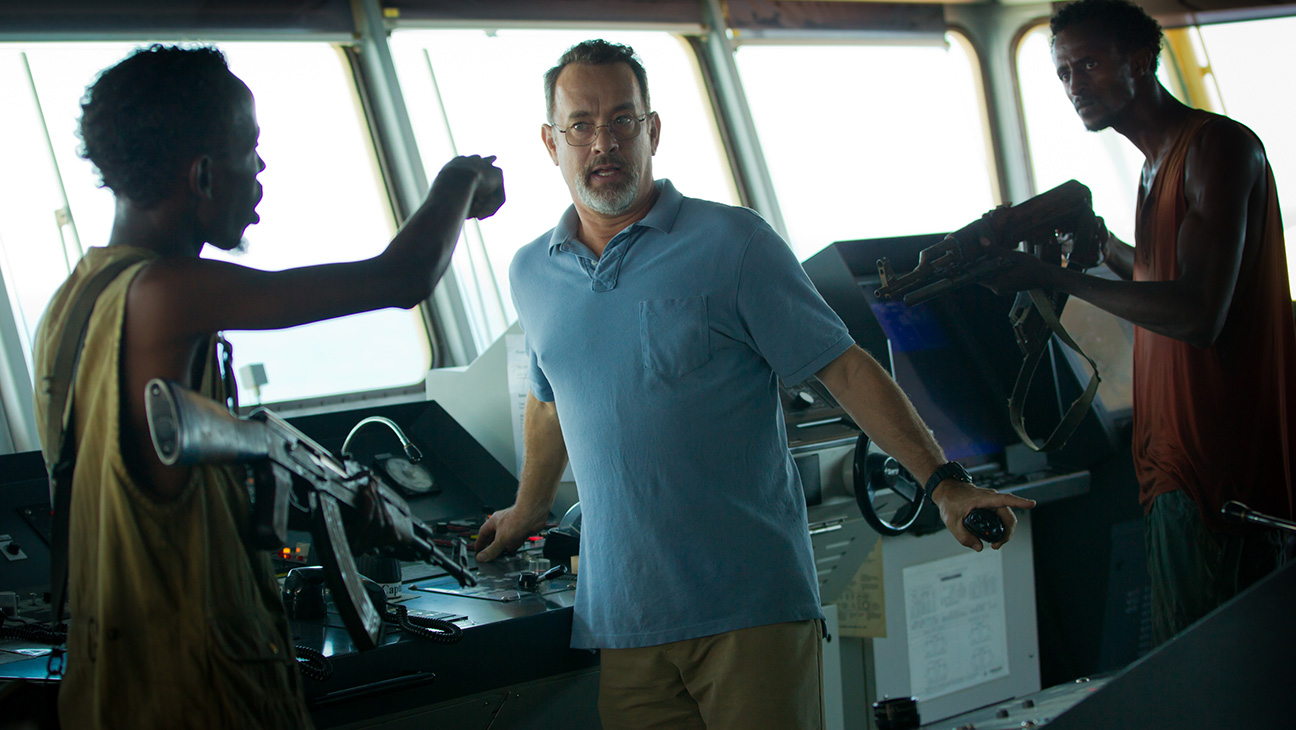 By dramatizing real life events and making them incredibly cinematic (Bloody Sunday, United 93) and infusing fictional stories with jarring realism (The Bourne series) director Paul Greengrass has carved out a career as one of Britain’s most exciting directors. His eighth feature film Captain Phillips is one of the former, telling the true story of an American freighter, the Maersk Alabama, hijacked by pirates off the coast of Somalia in 2009.

Greengrass’s signature documentary style is in full effect here, the camera hovering behind Phillips (Tom Hanks) and his crew, never intrusive or staged, just a patient observer. Later on as the pirates clamber on to the ship, it rushes after the action, always half a step behind and lending to the guerrilla quality of the film. After the aimless misstep that was Green Zone it’s great to see that that The Bourne Ultimatum director hasn’t forgotten how to stage astonishing action sequences which he produces over and over again here. The lengthy chase between the Alabama and the pirate’s skiffs, the bravura boarding scene and a long, tense game of cat and mouse below deck are all truly white-knuckle moments in an opening half that rarely stops for breath.

Whilst Captain Phillips is technically brilliant, it’s the films nuanced and understated performances that keep what becomes a huge story, involving U.S. navy destroyers and SEAL teams, grounded on a more human level. As the titular captain Hanks gives his best performance in years, channelling his long established everyman persona into a pragmatic figure of procedure who somehow remains the calm centre of a very violent storm. Such is his professionalism and rational nature throughout that a late emotional breakdown blindsides us whilst at the same time feeling genuinely earned. As sublime as Hanks is, he’s matched point for point by newcomer Barkhad Abdi as pirate captain Muse. Aided by his slight frame and penetrating gaze, Abdi underplays the role brilliantly, radiating a far more dangerous energy than his louder and larger crew. Later on, as the film moves from the cavernous hull of the Alabama to the sweaty confines of a cramped life boat the interplay between the two captains, now surrounded by the full force of the American navy, subtly reveals that the pair have more in common than either may have initially realised.

Captain Phillips is by no means perfect. The opening moments of the film in which Phillips worries to his wife (Catherine Keener) about the always unpredictable and often harsh world their children are growing up in are clumsily juxtaposed with scenes from Muse’s Somali village where vicious thugs force unwilling men into piracy. However, misguided geopolitical commentary aside Greengrass’s film is a brilliantly executed piece of cinema which eschews brouhaha American militarism for an emotionally draining finale in which there really are no clear cut winners.