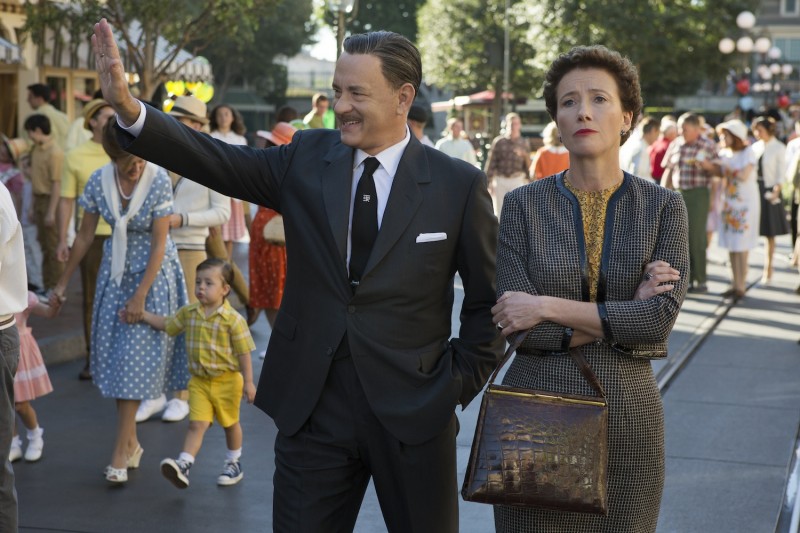 One to watch: Saving Mr Banks

Starring an ebullient Tom Hanks as Walt Disney and a disdainful Emma Thompson as P.L. Travers, Saving Mr Banks tells the story of how the ground breaking filmmaker and theme park impresario convinced the prim, proper and very sniffy author to allow her beloved creation Mary Poppins to make the leap from page to screen.

Directed by John Lee Hancock (The Blind Side) from a script by Kelly Marcel and Sue Smith Saving Mr. Banks is a film of two halves. On one side we have the 60’s set push and pull between Travers and Disney as they lock horns over dancing animated penguins and songs containing made up words. On the other, there are the flashbacks to the Australia of Travers’ youth where her affable but drunken father threatens to tear her family apart. The latter sequences, with Colin Farrell and Ruth Wilson as the young authors warring parents are the weakest of the film by far. Though it’s easy to see why he was cast in the role, Farrell doesn’t quite manage the uneasy blend of charming storyteller and hopeless drunk, his uneven performance unfortunately falling between two stools.

Far more successful however is the 60’s set material, in particular, the many scenes set in the writers room, where song writing duo The Sherman Brothers (Jason Schwartzman and B.J. Novak) along with scriptwriter Don DaGradi (Bradley Whitford) begin a long, painful war of attrition against a stony faced Travers. The conflict between the holier than thou author and the sunny faced team at Disney Studios is ripe for comedy and provides the films best gags. The more the writers push for wit, levity and singing, the harder Travers determines to stay true to the source material. The reasons for her immovable position and barbed persona are slowly revealed through the aforementioned flashbacks but it never feels organic and reeks of screenwriting. Thankfully, the tension eventually erupts into a wonderful scene where Travers’ resolve is broken by a beautiful rendition of “Let’s Go Fly a Kite” and ends up dancing across the room with tears of joy streaming down her face.

Somewhat surprisingly, in a film featuring two heavyweight actors like Hanks and Thompson, their interactions are some of the least rewarding moments of the film. Far more enjoyable is the beautifully judged relationship that develops between Travers and her driver (Paul Giamatti) that could so easily have descended into turgid sentiment but instead is a quietly unfurling master class in the art of understatement.

Ultimately, if what you’re looking for is the true story of how the world’s most famous nanny came to grace the silver screen then Saving Mr. Banks is not the film for you. The picture takes so many liberties with the tale that that the idea of flight via talking umbrella seems probable by comparison. If however, you’re excited by the idea of an old school Disney film with a great cast and even better gags then Saving Mr. Banks might just warm the cockles of your heart and make you fall in love with Mary Poppins all over again.

One that could go either way: Carrie 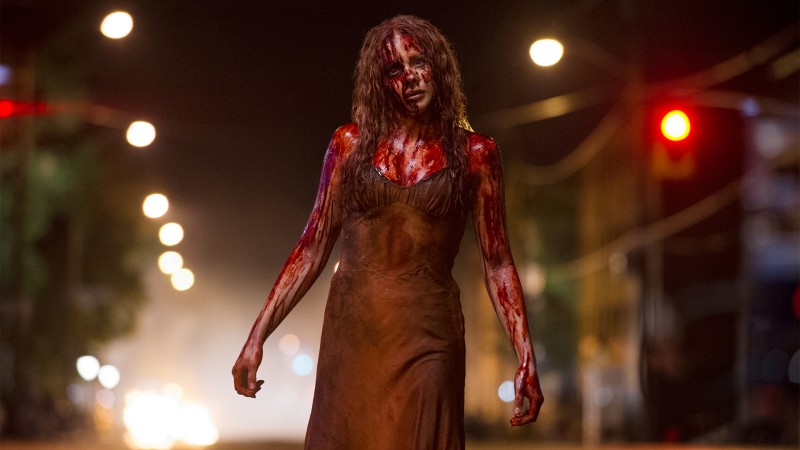 Carrie, starring Chloe Grace Moretz in the titular role and directed by Kimberly Pierce, is the most recent in a number of adaptations of Stephen King’s novel of the same name. Despite a wealth of interpretations, De Palma’s 1976 film has remained the definitive adaptation of the text. Many have consequently questioned the validity of another version and suspicions seemed justified when early previews suggested that Pierce had remade the film scene for scene, shot for shot.

It’s a relief then in the opening sequence when Pierce offers a very different take on the character’s origin. Thankfully the film continues in this vein, finding different ways to tell the story whilst remaining faithful to the original text. Carrie’s mother is more prominent in Pierce’s film and her relationship with her daughter is given greater emphasis than the troubled teens tortured interactions with her classmates. This works to the film’s advantage thanks to the strength of Julianne Moore‘s performance as Margaret White.

Other departures are less successful. The references to social media in particular are limp and come across as a lame attempt to make the film more palatable for a contemporary audience. The worst update by far is to the effects, used spectacularly and excessively but with an overly heavy reliance on CGI that makes them feel immediately dated. Thankfully the strength of King’s source novel transcends the film’s many issues.

Of course, even a strong story needs to be played out by a competent cast and thankfully Carrie really delivers in that area. As already suggested the ever-reliable Julianne Moore is excellent as Carrie’s mother while Chloe Grace Moretz succeeds in being both creepy and sympathetic in a performance that crucially never feels as though she’s aping Sissy Spacek’s turn in the original.

Interestingly De Palma’s 1976 film version of the novel was the first adaptation of Stephen King’s writing, which is now on of the most interpreted bodies of fiction in the world. With three film adaptations of other major King stories in the works it is possible that Carrie could kick-start a new series of big budget and mainstream adaptations of his work. While the film’s box office in the US might not suggest as much, the reworking of Carrie, for all its faults, highlights the flexibility and endurance of its source material.

One to seek out: Leviathan 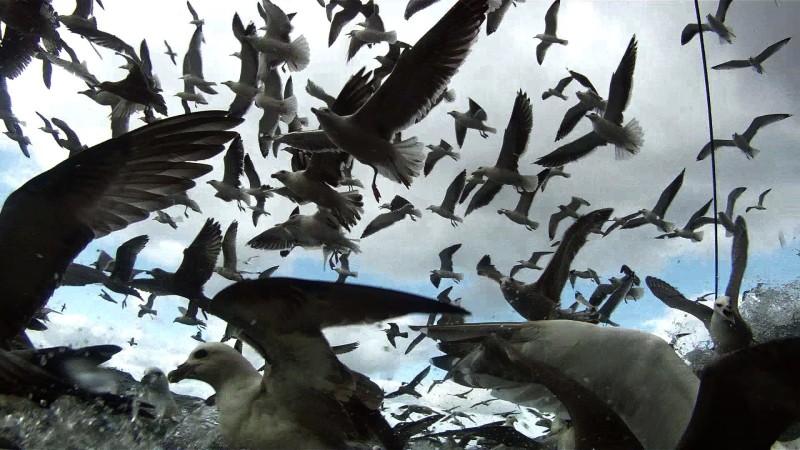 The world that the viewer is submerged into in Leviathan, an experimental documentary by Lucien Castaing-Taylor and Verena Paravel, is a dark, visceral and grotesquely mesmerizing one. With its hallucinatory mixture of eerie sounds and startling images, Leviathan shines a light on the distorted underbelly of a North American fishing boat and its crew. With almost no dialogue to accompany them, the viewer is set adrift in a violent and seemingly vengeful sea.

Both directors of this film work at the Sensory Ethnography Lab at Harvard University, which focuses on works of media that combine aesthetics and anthropology. This approach is clear throughout as the film documents the harsh reality of life at sea for fishermen and their quarry through a combination of distinctive and dreamlike images accompanied by a striking soundtrack. Though visually thrilling, the experimental nature of this documentary can be trying at times with the camera bobbing jerkily to the movement of the sea.

The use of cameras attached to the side of the ship to capture the disorienting and turbulent movements of the boat brilliantly convey the wild, cruel and brutal nature of the ocean. At times it seems as if the boat and the crew are battling against a fearsome, natural enemy that they are completely at the mercy of. As the camera dives into the water, the whooshing noises and raging currents of the sea assault the senses and as it surfaces we see screaming gulls buffeted by strong winds. There is no respite.

Although it has little in the way of narrative, this film can be interpreted as a meditation on the destructiveness of the sea and the toll it takes on the fishermen who try to make their living from it. A long scene involving a weary crewmember falling asleep during his break with Deadliest Catch playing in the background highlights the price paid by working one of the world’s most dangerous jobs. While not the easiest watch, Leviathan rewards the patient viewer with unforgettable sounds superimposed on to sometimes repulsive but always hauntingly beautiful scenery