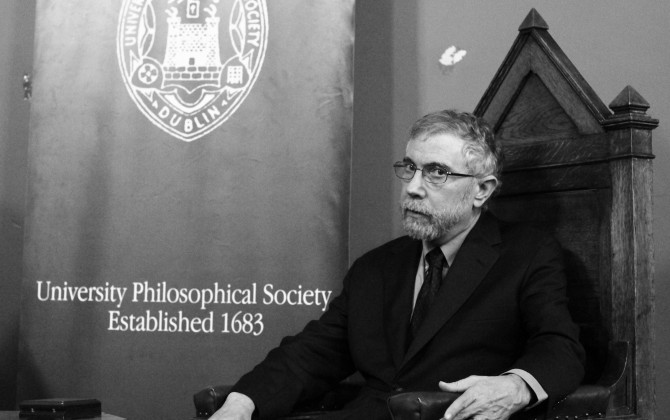 A tourist on Fifty-Seventh Street, Manhattan stops Jascha Heifetz to ask him, “Could you tell me how to get to Carnegie Hall?”

This gag was repeated by Paul Krugman, Professor of Economics at Princeton University, in his acceptance address to the Phil. The Nobel Prize winner was discussing making economics accessible in his New York Times column.

Economists, it can be assumed, aren’t very funny. The biggest laugh I’ve ever experienced in a lecture was when Andrew Somerville mentioned heroin. He wasn’t even making a joke. Yoram Bauman, the self-claimed ‘the world’s first and only stand-up economist’ has meshed the two trades of economics and comedy. He performs for colleges, corporate events and the military.

“There’s an idea in some academic circles that if you’re funny then you can’t be saying anything important, and that’s wrong,” the environmental economist tells me.

Dr. Bauman agrees with Krugman that humour is one way of explaining things, publishing a Cartoon Introduction to Economics. But does he find that some of his jokes exclude those with little knowledge of economics?

“I once had a fellow tell me that I wasn’t ready for Prime Time, and in fact I wasn’t even ready for sub-prime time.”

Dr. Bauman uses his talent for stand-up comedy as a unique selling point to increase demand for his real interest, carbon taxes. He explains them as, “a revenue-neutral tax shift involving lower taxes on the things we like (working, saving, investing) and higher taxes on things we don’t like (e.g. carbon)”. In 2008 a revenue-neutral carbon tax was introduced in British Columbia that many economists consider to be the best climate policy in the world. Bauman is part of the CarbonWa.org initiative to bring a similar policy to Wasthington State. The organisation argues that the policy could reduce personal and corporate income taxes, boost economic growth and reduce carbon emissions.

“Climate change has the potential to be a huge issue this century” and “economics has a lot to add to this discussion,” he says.

He jokes by offering journalists the depressed comedian angle. As he’s requested it, let’s put it in. His mother is bipolar and he has face-blindness.

The goal of ‘reform[ing] economics education’ is an ambitious one, but strides have been made by others in that direction. Steven Levitt and The New York Times’ Stephen J. Dubner published Freakonomics – A Rogue Economist Explores the Hidden Side of Everything, making economics more appealing by the theory to tackle issues from prostitution to gang violence.

Bauman read mathematics at Reed college, where he was a contemporary of Steve Jobs. He may not be a multi-billionaire, but he does charge two thousand five hundred Euro a show. Let’s hope the Phil will conclude the benefits exceed the costs, and they fork out for a worthwhile talk.