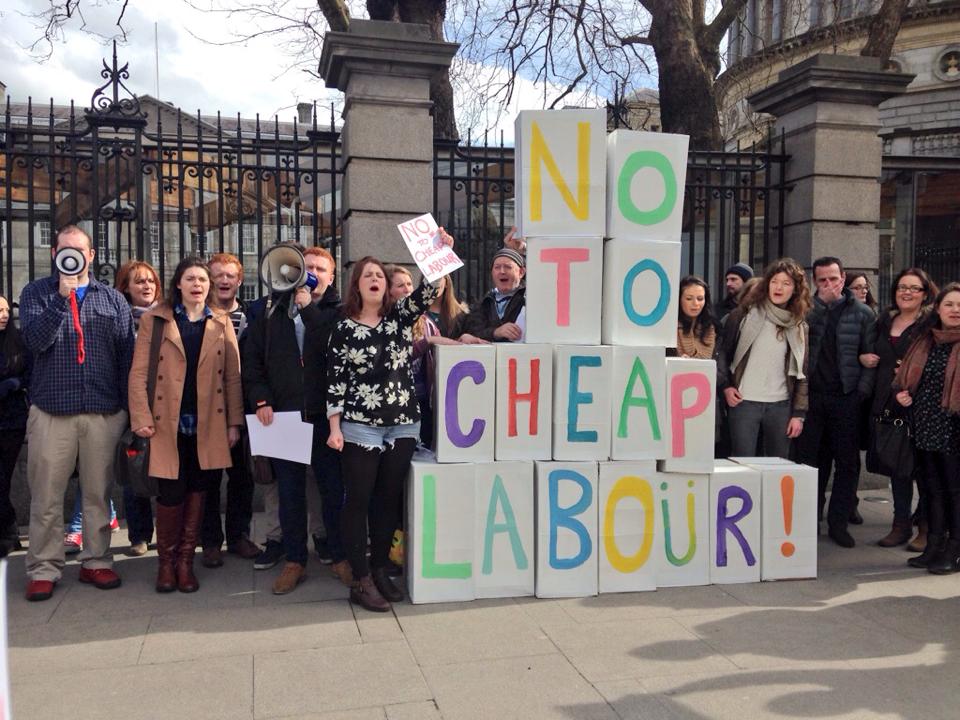 The demonstration was called in response to the announcement by Gordon Jeyes, Director of the new Child and Family Agency (TULSA), that he intends to introduce a scheme that would mean, “Every newly-qualified would be guaranteed a one-year training contract with the agency in which they would be mentored and receive dedicated training and support.”

SWAN (Ireland) has opposed the introduction of this scheme on a number of grounds, most of which are similar to those heard by Council prior to the passing of the opposition motion. SWAN has stated that the scheme represents a move to drive down salaries within social work, calling it “nothing more than a cynical tactic to employ social workers at the cheapest possible price,” considering that social workers’ have experienced pay cuts since 2009 in line with the Croke Park agreement.

Additionally, SWAN have voiced criticism of the promotion of the scheme as a “win-win” situation as it allows ‘inexperienced’ social workers to gain necessary experience needed to go into employment. They argue that this ignores the fact that social work students have already had to gain experience in social care fields in order to qualify for social work masters courses and have also gained experience through two substantial placement experiences in during their social work courses.

SWAN also suggest that the proposal of such a scheme risks undermining the morale of the new agency by unilaterally seeking to alter terms and conditions agreed by trade unions. A spokesperson for SWAN has stated: “According to the Child and Family Agency the word Tusla is a word meaning a new beginning, a chance to create a new identity in child protection practice. We too want a new way in social work. However, the way forward does not lie in cutting pay for graduate social workers.”

Speaking at the protest, Trinity Senior Sophister Social Work student Peter Cassidy said that “this scheme is against what we got into social work for. It is built on a business model. We did not get into this for the business, we got into it because it is about people. We have all made big sacrifices to get to where we are now.”

The motion passed by the Students’ Union states: “TCDSU will actively oppose the graduate scheme.” No opposition to the motion was voiced at Council and it passed by a large majority of votes. The demonstration, “Respect Social Work, No to Cheap Labour!” took place from 1-2pm today.