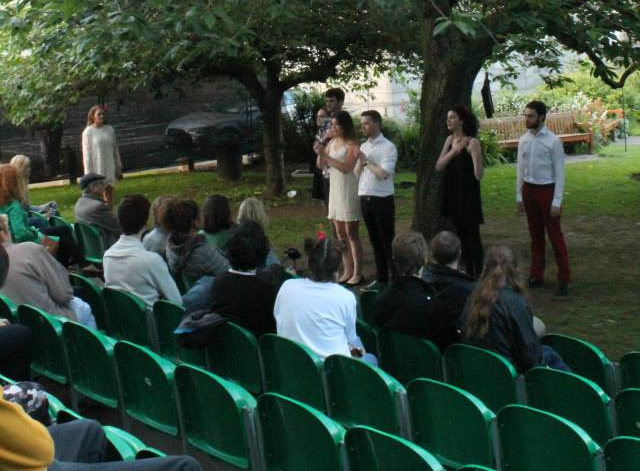 What is a myth? This question may seem like a simple matter of definition, but it lies at the very heart of MythFest, and particularly its headline show, The Sorrows. In the opening lines of the play we are told that a myth is many things. The uncertain and intangible nature of myth is what the cast of The Sorrows seeks to express.

Paul Behan reviews some of the smaller MythFest Events

Reading the description of the play we are told that it uses the traditional Irish myth of Deirdre of the Sorrows as a starting point. Deirdre, the tragic heroine of the Ulster Cycle legends, is Ireland’s very own Helen of Troy. She is the most beautiful woman in all of Ulster, yet this beauty curses her. King Conor of Ulster and a young warrior Naoise both fall madly in love with her beauty. A prophecy before her birth foretells the sadness she will cause, and yet the tragic events are unavoidable and end in death and destruction.

The cast of The Sorrows have transformed this age-old story into scenes recognisable to any Trinity student. Deirdre is the most beautiful girl in the arts block, Naoise is a gorgeous fellow student and Conor is her charming film studies lecturer. The play is centred around the setting of Trinity Ball. It is filled with allusions to modern Trinity life; a rendition of Jessie J’s Price Tag is even thrown in for good measure. The plot is loose and unstructured, comprising a sequence of events narrated by all of the voices onstage. Three young men and four young women make up the cast, and they all remain present on stage for almost the entire play. This is because they are all the playing the main characters. Typically, the first few minutes of a play for the audience are spent identifying these main characters and forming opinions on them. However in this case, we are left struggling to pin a solid identity onto any one person and trying to figure out just who is who. Which of these girls is playing Deirdre? Which of the boys is Naoise, and which is Conor?

The Sorrows, held in the Rose Garden on campus MythFest Photo

This is where the play becomes interesting. There is no main character. In fact, there are no set characters as we usually define them. The identities of Deirdre, Naoise and Conor are interchangeable. There is a fluidity in this play – which makes it thrilling to follow. While at the beginning this quality might be confusing, soon its significance becomes apparent. Deirdre’s voice can come from any of the characters because: what do we really know about Deirdre? Or Naoise, or Conor? Or any story for that matter? The characters in the play are continually talking over each other, repeatedly describing one event but from endless points of view and each time with slight variations. Deirdre saw Naoise and smiled. No, she laughed. No, she flicked her hair. No, she looked away. We are never given a concrete version of events.

This is the genius of The Sorrows. By creating a play where identity is interchangeable, the cast and crew of this play have forced us to view myths themselves in new ways. The swapping of voices and Deirdre’s purple dress mirror the elusive nature of myths themselves. We are told “it’s hard to be certain”, and this this comes across excellently in this production.

Despite all of the play’s uncertainty and mutability, there is something deeper it explores about the nature of myth itself. We are given many variations of Deirdre’s story, many different voices of outsiders who admit that none of them were actually there. However the end result is strangely unified. All of these reflections of the myth – of Deirdre’s modern-day Sorrows – converge in the final parts of the play. In the end, the characters chant together that Deirdre deserved better. All of the voices agree. This is the core of the myth, the part that cannot change no matter how much time passes or how much things change. Myths grow with us, but their messages do not change. Deirdre deserved better – in ancient Ulster and in the dance tent on a certain Trinity Ball night.

So, what is a myth? The Sorrows proves that this question has many answers, all of them uncertain. However one thing is definite: our perceptions of myths and the way in which we tell them may change, but their value doesn’t. There is still a story to tell. There are still lessons to be learned, and a play to be enjoyed. We will always learn from myths because they are in our stories, our history and ourselves.