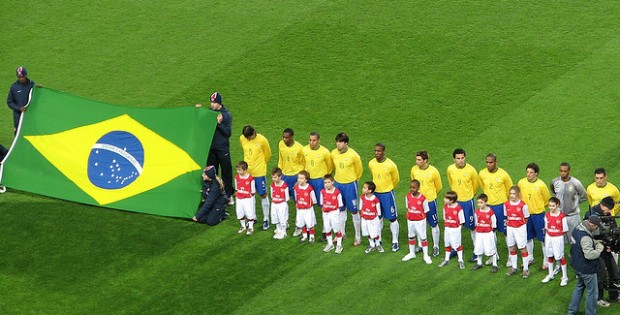 On June 30th 2002, Brazil and Germany met in the World Cup final. Surprisingly, it was the first encounter between, arguably, the two biggest heavyweights of international football, boasting fourteen World Cup finals between them. That day the players had read the script, and stuck faithfully to the historical narrative. The dull, efficient Germans had made their way to the final with three typically Teutonic 1-0 wins. Meanwhile, the fluid Brazilians had beautifully bulldozed a trail to the final showdown thanks to the creative talents of Rivaldo, Ronaldo and Ronaldinho. Germany were intent on containing the opposition with stoppers like Carsten Ramelow and Jens Jeremies, unable to make up for the absence of their creative and dynamic young star Michael Ballack, suspended from the final. In the end, Ronaldo overcame the monstrous goalkeeping of Oliver Kahn, scoring twice to complete his return to football’s pantheon, and more importantly to win a fifth World Cup for the Brazilians. A victory for football and joga bonito in full flow.

On Tuesday, Brazil and Germany reconvened, this time in the World Cup semi-final. The traditionally exciting Brazilians controversially entered the game having conducted a record number of fouls in the previous game. They had been average throughout the entire tournament but found themselves with a real chance to win it all at home. Fred, a far cry from the classic Brazilian number nine, laboured up front, supplied by second-rate attackers. Neymar the only forward who could hold a candle to the Holy Trinity of forwards twelve years ago but their talisman was absent courtesy of a fractured vertebrae sustained in the quarter final against Colombia. Like Germany twelve years ago, without their main attacking outlet their chances were severely restrained. Samba football? Barely.

The Germans were missing their best attacker too, Marco Reus, ruled out of the entire tournament with injury. But this time they had added style to their strength. Goalkeeper Manuel Neuer has developed new dimensions, outside of the average goalkeeping purview, by showing the sweeping and technical ability of a top-class libero. Mats Hummels and Philip Lahm have been titans at the back but are also superb, attack-minded footballers. Offensively, Joachim Löw could choose between the prolific international goalscoring of Miroslav Klose and Thomas Muller, the elegant playmaking of Mesut Ozil and Toni Kroos or the dynamic running of Andre Schurrle and Sami Khedira. Boring Germans? Not a chance.

Ultimately, the nirvana for Brazilian football is ‘joga bonito’, the beautiful game played with a panache that only great Brazilian teams can reach. Some Brazilians trace back the end of bona fide ‘joga bonito’ way back as far as the 1982 World Cup where Zico, Socrates, Falcao et al. all combined to create one of the most awesome displays of teamwork and skill ever seen on an international stage. Unfortunately for the dream team, their tactical naivety and blasé defending were exploited by Italian nous, and they lost 3-2. The 1982 experience initiated a negative trend in Brazilian coaching that has lingered ever since. To compete with the European giants, the emphasis in training switched from smaller, more technical players to focus on bigger and more physical players. It worked for a while, the compromise between containing physical football and creative attacking football brought some great success from the early 1990s to the 2000s. For every Ronaldo, there was a Dunga to cover for him.

This move away from attractive football and the failure of the Brazilian system has manifested in this traumatic experience for Brazil. Since it last won the World Cup, Brazil has had its fair share of difficulties domestically. More and more players are leaving for the riches of Europe, Eastern Europe in particular, for additional zeros on their pay-slips. This births players that are not in the Brazilian mould. Some have questioned the desire of young Brazilians. Brazil legend Zico has stated that ‘Brazil cannot simply believe their history will win games’, raising the question of whether there is a certain amount of delusion in the Brazilian game. There are question marks over the management of Phil Scolari, who stuck with his favourites throughout the tournament and left winger Lucas Moura and successful Atletico Madrid pair Felipe Luis and Miranda at home or whether it is a more wide ranging question of lack of talent. By Brazil’s high standards they have lagged behind other nations in coaching and producing players. In the 2013 Ballon d’Or, Neymar was the only Brazilian player nominated out of twenty-three. In 2002, six players were nominated. A new plan is needed; ‘joga bonito’ is dying. There were cynical fouls; there were dives, it was football lacking the joie de vivre that is usually associated with the Seleção.

After Euro 2000, Germany had gotten their wake-up call. A dreadful showing had convinced the German football association to overhaul their youth football system. The system would be more focused on technical ability, focused on the development of home-grown players across the top two divisions of Germany. According to the Guardian, the system covers 366 areas of Germany, catering for children aged 8 to 14 and is served by 1,000 part-time DFB coaches, all of whom must hold the Uefa B licence and are expected to scout as well as train the players. In fact, Germany has 28,400 coaches with the B licence which if you compare that to England, a country equally interested in football, who have 1,759. While it took Germany a few years to bear the fruits of their overhaul, their present generation of stars began emerging at the 2009 u21 Euro Championship. Six members of the victorious starting eleven that beat England 4-0 in the final that day could start in the World Cup final.  (Özil, Boateng, Höwedes, Khedira, Hummels, Neuer).
The Germans advance to the final to face Argentina hoping to win their fourth World Cup. Certainly, Germany will play to excite because that is their way now. A win would be a celebration of a positive change in philosophy. They will struggle to match the historic semi-final though where the Brazilians watched on in disbelief as the Germans cut them to shreds time and again. Bizarrely, it was just like watching Brazil.