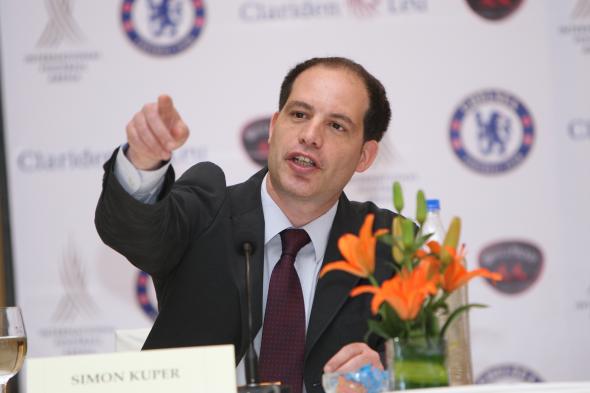 JL: How did you get into journalism?

SK: I did History and German, but in those days it was all much easier because if you liked football and you wanted to find out the results of the game you had to buy the paper. If you wanted to find out what time Match of the Day was on you had to buy the paper. In order to read a Ferguson press conference you had to buy the paper. So people bought papers; there was money. I started writing for World Soccer when I was 16. I did a monthly piece on Dutch football from 1986-87 and they paid me something like thirty or fifty quid a pop which, when I was sixteen or seventeen, was a lot of money. It was good. And then I kept writing freelance stuff, and then I joined the FT when I was 24 and it wasn’t particularly difficult. A lot of very mediocre people got jobs in journalism then.

JL: Why did you go into journalism, as opposed to German or History?

SK: I had brief thoughts about becoming an academic, but I realised I wouldn’t have been a particularly good one. In those days there were jobs in academia, I’d have gotten a job somewhere and now I’d have tenure, because it wasn’t that difficult. I would’ve been contributing not very much and I thought I could be better as a journalist, I’d have more to add.

I think journalism is mostly pretty useless. It doesn’t help people much or change society.

JL: So you think you contribute as a journalist?

SK: I think journalism is mostly pretty useless. It doesn’t help people much or change society, each individual article. Obviously having a free press is great for a society.

JL: Are you keeping the press free by being a journalist?

SK: No. If I weren’t writing that piece in the FT, somebody else would be.

JL: Exactly. So do you think you are contributing as a journalist, or are you adding to the noise?

SK: I try never to add to the noise because whenever something happens there’s a lot of people saying the same thing. So, for example, people are saying that Obama didn’t protect American power enough, and that’s why ISIS and Putin and all these people are getting uppity. Now, that may be true (I don’t think it is, but let’s say it’s true), but it’s still pointless writing that article because five hundred other people have written that.

JL: But perhaps, by many people writing it, it gets it more into the public consciousness. People think that it’s a better idea because they hear it all the time.

SK: Yeah, but it’s a deeply humiliating and unsatisfying position to be in.

JL: You write about the statistics of football in Soccernomics. The misinterpretation of these statistics can be a huge part of the noise. Does that really frustrate you?

SK: Well, it’s good for me because I need that noise to write something different. I want to know what most people are saying because I’m a contrarian, so I’ll try and say why that’s wrong, why that manager is actually fine, why he’s not the problem. I mean, for example, last year about Moyes, I was saying he’s not the problem. And the thing is, if you’re one of the people who is saying Moyes must go, there’s no money in it, because they can find other people to say Moyes must go.

Football is becoming less kind of backward and discriminatory but there are no black managers, almost none. There are no women managers, which is stupid because why couldn’t a woman manage a football club?

JL: Yeah, but if you’re already in the position then your employers want you to write that article.

SK: Yeah but then they’ll sack you because you get all the more expensive, and they won’t give you any more money because you’re just writing the same stuff as everyone: Moyes must go, England can win the world cup etcetera. In that kind of commodity journalism where you go to the press conference and you write the same story everyone else does, you either get nothing for it or, if you’re amazingly lucky, you’ll get a low salary, and I’ve never wanted to. One of my business strategies is not to be a commodity journalist.

JL: So where do you think sports journalism is heading?

SK: Where it is now is people doing it for free, which gives them pleasure and it’s fine, and it destroys the jobs of people who used to do it for money. And I think where it’s heading is people will be doing it for clubs and for sponsors. Manchester United increasingly hire journalists who write.

JL: Is that journalism?

SK: Well it’s a kind of journalism, when you go and interview Rooney for the club TV channel and then they put it out and you write a piece to go with it. And obviously you can’t be critical of him or anything, but that’s employment: writing, access, all-access will be that. Or Audi will hire you to write World Cup “content” they call it, for their website.

JL: But doesn’t that create a complete bias?

SK: All these companies are starting to realise that ads don’t work so well on your generation. In my day you had to watch the ad as it was during the TV programme. People don’t like watching ads anymore, they think it’s an invasion, and so the company doesn’t want to make an ad, it wants to write content that people will read. So they need people like you to write interesting content. It can’t just be banal stuff, ‘World Cup’s coming, we’re all very excited’. They’d like a really good piece. I did one for a bank – I did a series for a bank on football economics. It was on their website. I didn’t mention them in the piece, but I addressed themes that they wanted addressing, like for example the difficulty people have in saving for old age.

JL: And where would you draw the line then?

SK: I wouldn’t endorse anyones product. I don’t know, was I over the line? I don’t think so.

JL: Did you agree with all the things in the piece?

JL: And with those kind of things, football economics, have you ever considered going into a practical role?

SK: I’ve been asked by clubs to come and brainstorm, and they don’t want to pay, and clubs are used to not paying, because people want to be part of it. So the club says come and talk, and with two clubs, with Everton and Juventus, what I did was I said okay, I’ll come and talk. But then you have to give me interviews at the end.

JL: So something of a payment?

JL: Do you think there is a bias towards hiring certain types of people in sports journalism?

SK: In sports journalism there is a massive bias against women, and on TV women tend to be hired to be pretty in these kind of lower jobs: interviewing players, standing on the sidelines.

JL: And do you think that will change in the future?

SK: Very slowly. I mean football is becoming less kind of backward and discriminatory but there are no black managers, almost none. There are no women managers, which is stupid because why couldn’t a woman manage a football club?

I think it’s something all writers are considering. Do we need publishers? Do we need the truck that drives the books to the bookshop?

JL: So what do you plan on doing in your future?

SK: I’ll write until somebody cans me, which of course can happen, and you know I’m one of the few over-forties still working in journalism. I mean, my peers, many of them, have become PRs. It’s a much bigger industry than journalism so I feel like I’m a survivor. I’m hanging on and I’ll hang as long as, you know, until they throw me off the cliff.

JL: Well surely there’s something to be said for having a brand name in journalism? People might read your articles because Simon Kuper wrote them.

SK: You know Patrick Barclay? He was a football writer in England. He’s written various books and was a journalist. Now he’s over sixty five, and he said to me, “in this business you don’t get better or worse, you’re in or out of fashion.” And so at one point when I’m out of fashion an editor will say “Oh that boring stuff Simon Kuper writes, I know someone who could do it much better”.

JL: What about the economics of writing books? Will it get worse with Amazon almost monopolising the industry?

SK: Well, Amazon could actually benefit writers like me because if you publish with them they will give you seventy percent. Right now if I sell a book for fifteen pounds I get one pound. So if I can sell a book on Amazon for five pounds then I can get something like three pounds eighty, so what I need to then do is drive readers to that website so that they will buy that book.

JL: So is that your plan for the future?

SK: I think it’s something all writers are considering.  Do we need publishers? Do we need the truck that drives the books to the bookshop?

JL: So perhaps instead of authors going out of business it will be publishers?

SK: That’s what they’re very worried about. There will always be authors because people always want to write books, but can you make a living out of it? I think it’s going to get better because we will keep more of it ourselves. It’s crazy that I write the book and I get about 7% of what the customer pays and that’s happened in journalism as well, people really want to write an article about Manchester United so you get nothing for writing the article. A friend of mine, a well respected journalist, has written books, wanted to do a piece for The Guardian, which he has written for a lot, and they offered him eight pounds.

JL: Perhaps it is the case that getting your name in The Guardian makes your name worth more the next time you write?

SK: I haven’t seen much evidence. You can become a very big name through football journalism, I mean someone like Gabrielle Marcotti has, I think, half a million followers. I’m sure Gab does make good money, and he should, but you can get an enormous amount of exposure and it will never translate into money for most people.

JL: Do you think what you do makes people happier?

SK: I think it actually does, not me specifically but, for example, there’s this German friend of mine, a sports journalist as well. And he said, you know, we write stuff, we write honestly what we think, we’re not trying to bullshit anyone, and it helps people back home if we’re at a World Cup. They can understand the World Cup a little bit better because we’re here, they’re not there. We have a bit more experience of football than they do and he said it makes them happy, and that it means it’s a worthwhile activity. That’s what I like to think.

JL: Great, I think that’s all I wanted to ask!

SK: Good luck, and don’t build a lot of hope on sports journalism.

JL: Luckily I wasn’t planning to.  Hope you have a good night.