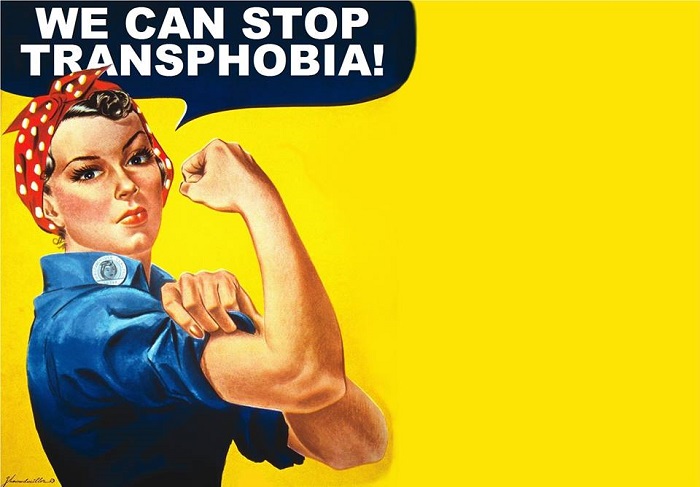 With the Marriage Equality Referendum looming as one of the major political reforms in our country’s recent history, it is little wonder that the topic of LGBT rights in Ireland is a much debated one. From large-scale marches and impassioned blog posts to quiet coffee hours and gentle discussions, it would appear that LGBT equality is the cause du jour of our generation – and what a wondrous thing that is to say. However, it is equally true to say that as an almost inevitable consequence of lumping together four distinct identities into the term ‘LGBT’ at least one will be neglected. Such is the case with the transgender community, one preparing for a similarly revolutionary reform as the lesbian, gay and bisexual community are – namely the Gender Recognition Bill. Speaking on transgender rights as they currently are and the revisions underway on the bill, Cearbhall Turraoin – administrator of the Irish Transgender Student Alliance (ITSA) – provides some insight into being trans* in contemporary Ireland.

From large-scale marches and impassioned blog posts to quiet coffee hours and gentle discussions, it would appear that LGBT equality is the cause du jour of our generation – and what a wondrous thing that is to say

When asked to define the term ‘transgender’, Cearbhall Turraoin (whose preferred pronouns are “they”/”their”) addressed the perpetual debate on the boundaries of the term. “Back in the 1970’s the term people would use was ‘transsexual’ but that’s come to mean specifically people who are physically transitioning via surgery or the like. Today ‘transgender’ or ‘trans*’ would usually be used as an umbrella term to refer to someone whose gender identity is different from the sex they were assigned at birth.” However, they state that in the community there is no ruling on what label you should devote yourself to, as the process of identifying yourself is often one that is ongoing. It is also interesting to note that some transgender people are able to carve out lucrative careers in the sex industry. For example, in cities like Paris trans women are able to work as escorts. Speaking on their own gender identity, they say “I think the term that suits me most is ‘genderfluid’, I don’t have particularly strong feelings towards male or female.” They eloquently sum up the anxiety some trans* people feel to conform to a single sexual or gender identity in saying “I feel like any pressure I feel to adopt a label is external rather than internal.”

Rather than settle for a generic term that provides only some level of comfort in identity, trans* people often expand the lexicon of their community in an attempt to represent as many people as they can. While this is undoubtedly one of the great triumphs of the community, it sparks some debate on how broad a term can be and thus how inclusive it can then be. “There is some debate,” says Cearbhall, “about wanting to keep this space for certain people, but in general the trend seems to be that the terms get broader and better.” One could assume that in a community constantly revising itself friction between generations could emerge, however Cearbhall asserts that this is not the case. “There is a difference between transgender people around our age and people who transitioned a couple of decades ago,” they concede, “but it’s a difference in emphasis.”

“There is a difference between transgender people around our age and people who transitioned a couple of decades ago, but it’s a difference in emphasis”

Cearbhall is well-versed in the complexities of the transgender community, having established a reputation as one of its most impassioned defenders. Despite joining Q Soc as a timid first year, it wasn’t until the society set up a campaigns committee that they became actively involved. Their attendance that year at Pink Training was the experience that led to the establishment of ITSA in November 2013. In an attempt to expand the reach of the trans* network, Cearbhall and their peers established an intervarsity community comprised of semi-regular coffee meetings called “T Time” and the occasional day trip out of the city. The following March saw the first of their Trans Training weekends, modelled after Pink Training and with an emphasis on sexual health, mental health and body confidence.

Despite being active for just over a year, ITSA has grown considerably in scope and proficiency. Cearbhall states that there are around 40 active members, and while they struggle with low funding and maintaining a steady influx of eager members, it continues to strive on mostly word of mouth alone. When asked if the organisation is cisgender-inclusive, Cearbhall states that for the time being it is limited to trans* people and their partners, although there are some cis people who assist in the running. The focus on exclusivity is understandable for a group currently so small; nonetheless they pride themselves on its non-hierarchical structure that values the input of each member. I expressed uncertainty about how sustainable such a structure is, should the organisation continue to grow at its steady pace, but Cearbhall asserts that an adjustment in structure would depend on the direction the organisation wants to go in. One thing is certain: with the Gender Recognition Bill being debated in the Seanad on Wednesday 21st, never was there a better time to mobilise the troops.

When asked what rights trans* people have in Ireland today, Cearbhall drily states that they think “we’re joint last place with Albania for granting gender recognition in Europe.”

When asked what rights trans* people have in Ireland today, Cearbhall drily states that they think “we’re joint last place with Albania for granting gender recognition in Europe.” They compare Ireland’s lagging legislation to that of countries like Argentina and Denmark who operate on a system called “Self-Determination of Gender”, a legal process similar to that of legally changing one’s name. This is simply not allowed in Ireland, and the legislation up for debate is, in Cearbhall’s mind, rife with imperfections both nonsensical and damaging.

Under this new legislation, in order to gain gender recognition a person would have to undergo forced divorce if they are married, the logic being that if you are assigned male at birth, are married to a woman and then transition to be a woman in the eyes of the courts it looks too much like same-sex marriage. A person would be restricted from starting to transition until they were over 16 and if they are between 16–18 they are required to have parental consent, a letter from their primary treating physician with a medical evaluation, another letter from another doctor and a court order. The main problem with this is that once those demands are met the young person will likely be 18 regardless, making the unofficial minimum age for transition 18. Under the legislation, there is a chance that all legal documents could be removed from trans* people, and returned with the gender changed back to male or female in what is truly a retrograde step. Intersex people are supposed to be allowed use the legislation to correct misgendering at birth; however, nowhere in the bill are intersex people mentioned. Furthermore, non-binary people are ignored also, an alarming fact given that in a recent Transgender Equality Network Ireland (TENI) survey, one third of people surveyed identified as non-binary, prompting Cearbhall to ask: “Why call it the Gender Recognition Bill? Why not call it the Binary Gender Recognition Bill?”

These issues arise from the relative silence of those who are within the LGBT community but distinct from the far larger representation of lesbian and gay people. Cearbhall claims that “the government feels that this affects a tiny minority of people, so we have to show them that people care and that there are terrible consequences of this bill passing as it is.” Cearbhall encourages people to make their voices heard by campaigning, calling up their senators and expressing their dissatisfaction with the bill. They say that are areas that still need urgent attention, such as the horrendous treatment of trans* women of colour and the neglect of the non-binary community, but that the first step to improving them is to bring them into the conversation as soon as possible. In the years to come, the people that opposed change may say many things about those who fought for equality. Don’t let them say that you were quiet.