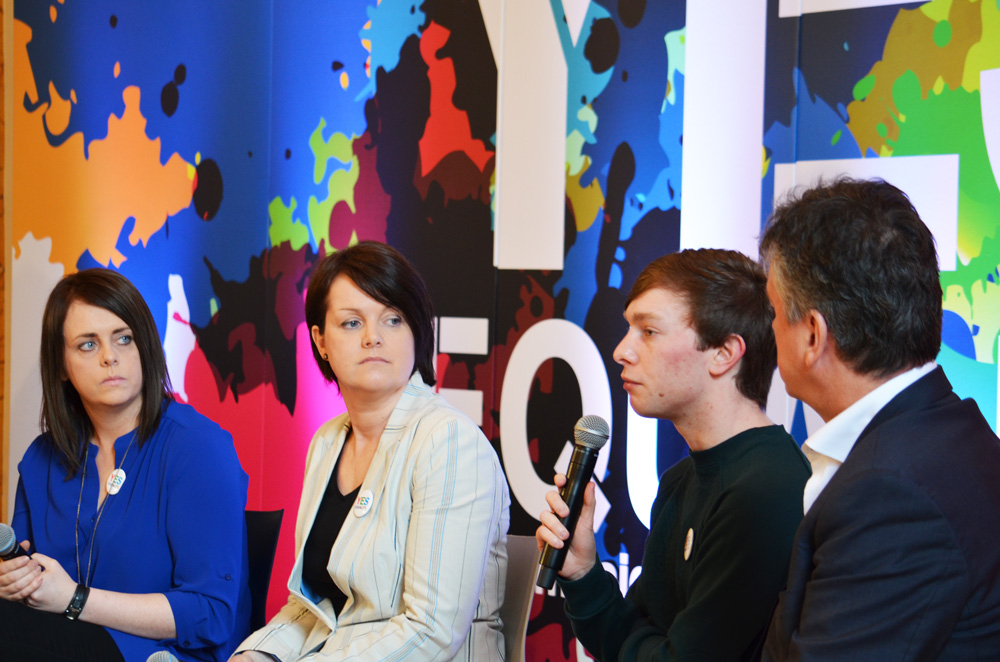 The Yes Equality campaign for civil marriage equality was officially launched today, March 9th, in the Pillar Room of the Rotunda Hospital.

The launch was chaired by journalist and broadcaster Charlie Bird who, in his opening welcome, praised the diversity of the assembled crowd, from trade unionists to politicians, to members of the public and those who have campaigned for this for years. This presence, according to Bird, was a testament to the fact that “Ireland has grown up, the arc of history has moved on”, and that all strands of Irish society would get together to support this campaign.

Yes Equality is a coalition group campaigning for civil marriage equality formed by GLEN, Marriage Equality and the Irish Council for Civil Liberties.

Around the room were TV Screens, displaying the stories of ordinary Irish men and women, of both the LGBT and straight communities, telling their reasons for voting yes. Throughout the talk it was emphasised that it would be Irish mothers, fathers, brothers and sisters that would achieve victory for the yes campaign.

Addressing the audience first were four members of the public who outlined why the campaign for marriage equality meant so much to them. One of the loudest rounds of applause went to Patrick Dempsey, who talked of how he had to leave school without completing his Leaving Certificate, due to the extent of the homophobic bullying directed towards him. He spoke of how, if the referendum passes, he hopes that this generation of gay men and women can be the first who are “seeking not the protection of the closet, but the protection of the law”.

The audience, which included Tánaiste Joan Burton and Minister for Children James Reilly, also heard from Kieran Rose of the Gay and Lesbian Equality Network (GLEN) who spoke of the great leap forward in attitudes to equality and human rights in Ireland. He cited touchstones such as the decriminalisation of homosexuality in 1993 and the passing of civil partnership legislation in 2010. He said: “Now is the time to complete that progress, and vote yes to equality”.

A key theme prevalent in every speech was the fact that this was a referendum that would be decided not by politicians, but by the ordinary people of Ireland. Mark Kelly, the Executive Director of the Irish Council for Civil Liberties, spoke of the importance of engaging in a dialogue and of rebutting the doubts of those who feel that the proposed amendment would be a threat to marriage: “Many people have legitimate doubts about the consequences of voting yes. We are looking forward to having that conversation”.

Gráinne Healy, chair of Marriage Equality, a not-for-profit advocacy organisation, continued this theme, highlighting the need to talk about this issue on the doorsteps of every constituency in Ireland: “It is about telling stories, stories of why marriage is important”. She cited the recent addition of 40,000 new names to the electoral register as evidence of the mobilising force of the yes campaign so far, and emphasised her belief that: “This is the peoples’ referendum, not the politicians’ referendum”. In a message directed to those who believe the proposed amendment is a threat to the family values protected in the Irish Constitution, Healy had strong words: “We value love, commitment and the family community. These are the values of the Yes Equality Campaign”.

Correction: 22:51, March 9, 2015
An earlier version of this article referred incorrectly to the Minister for Children. He is James Reilly, not James White.