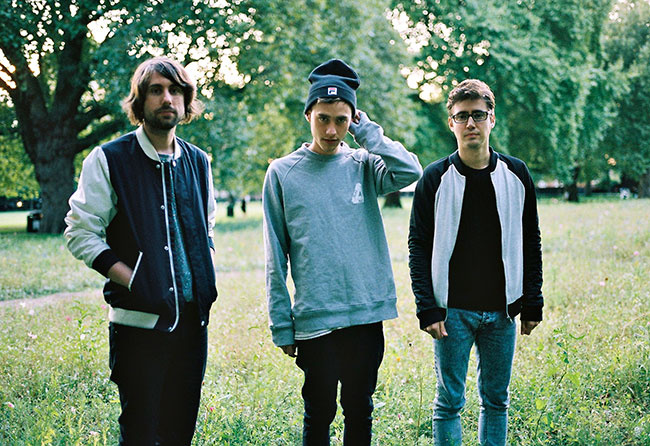 Years & Years are very quickly becoming one of the most talked about bands of 2015. Ahead of their set at this year’s Trinity ball, the trio sat down with us to discuss their music, what they have learnt from their experiences in the last year and how much they miss their cats.

After winning BBC’s Sound of 2015 Award, the band’s career really started to take off, “We’re just really grateful. I was really aware of the BBC award because I do think it really champions great new acts and it is a really big predictor of success.” Singer Olly Alexander explains, ”The reality is, our lives and careers have changed since that award so you can’t deny it. For whatever reason it has had an impact, and I think we’re just really grateful that it happened, that we were lucky enough to win it.” Emphasising that although winning awards is flattering, it is not something the band set out to do, “It doesn’t really change the way you work or the way you approach things.”

The band have been together since 2010. As Emre Turkman explains, things all started when Mikey Goldsworthy moved to England, “Mikey is from Australia and he moved to England and he wanted to start a band so he put an ad up on a musician website where I met him , then we started making music. Then soon after Mikey met Olly through a mutual friend.” Fast forward five years and the band have played all over the world, from America to Japan and Trinity Ball was the first time they played Ireland. As well as this, Years & Years have performed live on TV shows and are busy with their current schedules. Olly explains that there isn’t really any way to prepare for it, “I don’t know how you would prepare for it. We’ve been together for five years, so we’ve done as much groundwork as possible. We’d written nearly all of the album before January. I don’t think you could ever know what it would be like being a ridiculously busy band, you just have to kind of learn on the go.” There have been a few moments in the whirlwind that has been the last few months that have really made the band stop and think, “When we were on Jools Holland I thought, “oh this is a bit weird”” Emre points out, “That was our first TV (performance) ever.” Mikey says that that is one of the more nerve-racking parts of the job, and Olly admits that he finds it really stressful. Part of this, he explains, is that there isn’t a crowd to react against, you don’t know where to look and “It feels like an audition,” adds Emre.

Their musical tastes vary amongst themselves, overlapping for certain bands but then they each go their own way as well, after naming as many Irish bands as they could think of, they conclude that their favourite bands include Little Dragon and Caribou, as well as Radiohead and 90’s RnB making an appearance on the list. As a result, they don’t tend to get overly influenced by one genre in particular, “Sometimes if you get really excited about a song that you love or an artist that you really like, we would listen to it and think ‘oh we like what they’ve done’.” Olly explains, “We all have different influences so I think it sounds quite unique, the sound we end up making. You don’t really want to be influenced too much by anything even though it’s sort of unavoidable.” His bandmates agree, adding, “It sort of filters through you, and then comes out another way. You can never plan to do a song, you might think you can.  You can hear it in our mind’s eye, but it’ll never come out like that.”

Their upcoming debut album, ‘Communion’, is set for release in June 2015, the album is nearly finished and it will consist of songs that the band have written over a long period of time, Olly explains that there wasn’t a set writing schedule, “Some of [the songs] are really old… so we’ve taken a long time to get all the material. We haven’t had a certain amount of time, like six weeks, to go write lots of new material. It’s just bits and bobs so the album took shape over time so it kind of built itself up.  We never really had a conscious “we’re going to make this or that”.” Years & Years have previously released EPs, and aside from the fact that they were more DIY, and the recording of the album ended up being quite fragmented, Turkman explains the different approach they had to take for the album, “You have to be a bit more considerate when you’re doing an album. It’s not like a single. There was one or two tracks that we’ve taken off it because they didn’t fit so you have to think of it more that way because it’s a bigger piece. In that sense we put thought into it but it’s kind of a natural.” As far as a theme of the album goes, Olly says that it’s about “romantic rejection basically, or sort of general personal anxiety. “ But, laughing, Emre adds “and you can dance to it. “

With the recording process and intense touring, the band have been surprised by the things they miss and how little time they get to spend at home, Mikey explains “you really appreciate your time, your home. You really appreciate going to see your cat, just the little things […] [you learn to utilise] your time quite significantly” This gets the other two laughing, Emre adding “Hello Lamp, how I missed thee.” They are not wallowing in the negative, but pointed out that there were some things about their current situation which they didn’t expect. For example, have been surprised by how little time touring is actually spent on stage, “performing is the best bit.” Olly says, “The writing and recording process can be really great but when you’re just touring constantly, performing is great but you actually spend so little time performing. It’s all the other stuff [that takes up more time]” But despite this, and despite the fact that they miss home, it’s impossible not to see how excited these guys are, constantly interacting, speaking over each other and laughing the whole time, even after travelling from the UK after doing press there, and doing interviews in Dublin and having to wait until 2:30 in the morning to perform, they’re all in really high spirits. There is no denying the buzz about the band, and after their performance at Trinity Ball, there is no question why. Years & Years are set for a long year of touring and their album will be released in June, just in time for festival season.