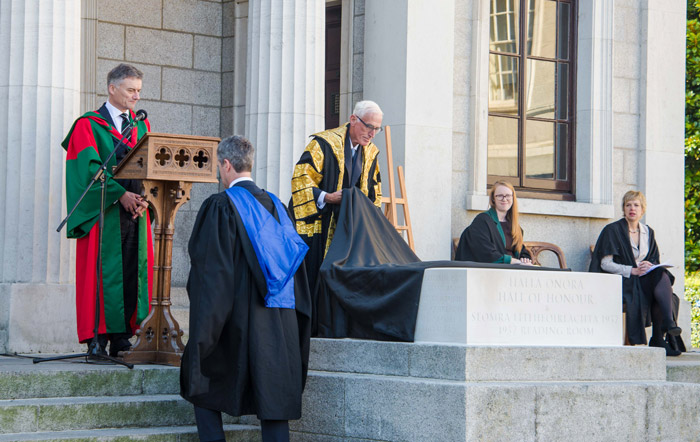 Trinity College Dublin unveiled a memorial stone this morning in memory of the 471 staff, students and alumni of the College who lost their lives in World War I.

The stone was unveiled by Pro-Chancellor of the University Professor Dermot McAleese at 11.30am.

Some 3,000 of the Trinity community joined the armed forces as part of this war, with nearly a third of these from the faculty of medicine.

Speaking at the event, Provost Patrick Prendergast asserted that Trinity is taking “an active role in the commemoration” of the war, adding: “few institutions were more deeply involved in Word War I than this institution”.

Prendergast stated that the loss of almost 500 members of the College community at a time when the College had only 1500 undergraduate students was “catastrophic”. In November 1919, the decision was made to create a memorial for these members of the College community. In response, the Hall of Honour was erected in 1928. The hall now acts as the entrance to the 1937 Reading Room in Front Square. However, Pendergast highlighted that the purpose of the hall, originally designed as “a sacred place to mourn”, is often forgotten and has been glossed over by history.

The decision to place the stone outside of the Hall of Honour served to draw attention to the intentions of the building. “We are proud of the role we have played in ending the silence”, Prendergast added, commenting that that the stone would make the college community aware of “the purpose it was built”.

The stone, created by sculptor Stephen Burke, is made of Portland stone. It is inscribed in both Irish and English.

Senator Ivana Bacik, who serves as Reid Professor of Criminal Law, also addressed the audience, highlighting the importance of commemorating, and not celebrating, these historical events. A minute’s silence was then held.

The unveiling of the stone is part of the Trinity’s attempts to mark the Decade of Commemorations, which will run up to 2023. In July 2014, Trinity held a World War I roadshow, in conjunction with RTÉ and the National Library. As part of this, members of the public were invited to bring along family items and mementos related to the war so they could be cataloged in an online European archive. Pop-up talks and lectures on the war and Trinity’s own history during the period were also held.